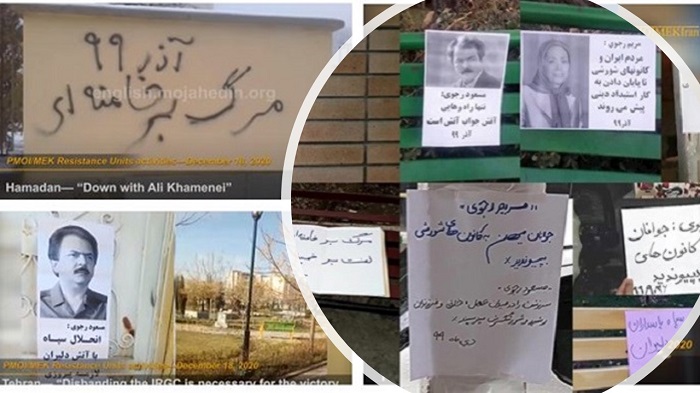 Protests against the corrupt mullahs’ regime are growing by the  People’s Mojahedin Organization of Iran (PMOI / MEK Iran) internal networks Resistance Units in Iran. In several cities, like Hamadan, Mashhad, and Tehran, graffiti has been sprayed on the walls of buildings. Supreme Leader Ali Khamenei and Hassan Rouhani, the so-called president of this regime, as well as the corrupt parliament and the terrorist and plundering IRGC, are to blame for this dire situation in Iran.

In different cities of Iran, including Tehran, Hamedan, and Mashhad, and across Iran, the spread of slogans on the walls against criminal mullahs, in particular Ali Khamenei. MEK supporter’s activities of the inside network of the People’s Mojahedin Organization of Iran (PMOI / MEK Iran), called the MEK Resistance Units.

It is worth noting that Iran is facing an explosive state since 2018.  After five nationwide uprisings since 2018 against the dire economic conditions as a result of the mullahs regime’s mismanagement and corruption.

The MEK’s network inside Iran has gained a lot of support from all segments of Iranian society, especially the youth. Since 2018, the MEK Resistance Units have expanded and increased their activities across Iran.

In the past few days, in addition to Tehran, the MEK Resistance Units organized anti-regime activities, by installing handwritten anti-regime slogans on the walls reading in particular “Down with Khamenei, hail to freedom.”

The MEK Resistance Units installed huge posters and banners of Maryam Rajavi, the President-elect of the National Council of Resistance of Iran (NCRI), an Iranian Resistance leader Massoud Rajavi, echoing anti-regime slogans, In Tehran and Fariman.

The MEK Resistance Units in Mashhad and other cities, also took to graffiti and handwritten anti-regime slogans on the walls reading:

“Down with Khamenei, hail to freedom.”

Slogans on the cities walls include:

Tehran— “Disbanding the IRGC is necessary for the victory of the Iranian people.”
Fariman— “Rebellious youth will write Iran’s destiny.”
Fariman— “The theocratic fascism in Iran cannot continue its rule a day without suppression”
Lahijan— “Down with Ali Khamenei, Viva Rajavi”
Mashhad— “Rise to overthrow the regime”
Mashhad— “Rebellious youth will write Iran’s destiny.”