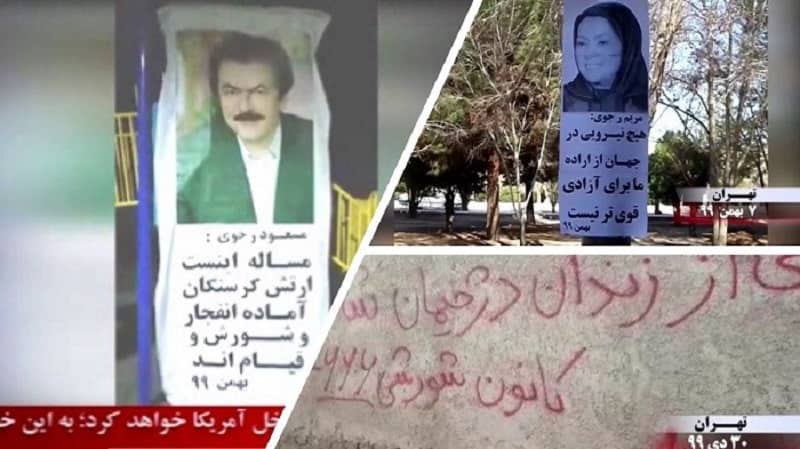 Massive posters were displayed across cities with the picture of Massoud Rajavi and slogans emphasizing that the MEK Resistance Units “are sparks of uprisings”.

Members of the Resistance Units also handed out leaflets, pamphlets, and images of Mrs. Maryam Rajavi, President-elect of the National Council of Resistance of Iran (NCRI), showing that they support her values of freedom, democracy, the respect of human rights, a non-nuclear Iran, and so on.

Slogans were graffitied across cities showing the regime that the Resistance Units and the people are not going to stop resisting the Iranian regime. Their determination was emphasized through slogans such as “Nothing in the world is stronger than our determination and will to achieve freedom” and “The army of the poor and unemployed will not rest or surrender”.

The members of the MEK Resistance Units also paid tribute to the many Iranians that have sacrificed so much to rise up for freedom in their country and they also warned “Iran will rise up in revolt” and “The mullahs must get lost”.

The Iranian regime has been worried about further unrest in the country, especially since the November 2019 uprising that took the authorities by surprise because of the speed the protests spread across the provinces and the intensity of the people’s anger. Because of this, it has been cracking down hard on all dissent, trying to increase pressure to prevent further unrest.

However, the people of Iran, the MEK Resistance Units, and the MEK supporters have shown how courageous they are. Despite the very heavy consequences that they face, they continue to voice their discontent and their support for the Iranian Resistance.

Over the past four decades, the regime has killed more than 100,000 MEK supporters or members and anyone with ties to the organization is punished. The regime has tried its hardest to create an atmosphere of terror, but this has not stopped the Iranian Resistance from growing. Over the past couple of years alone, there has been a huge increase in the size of the MEK’s internal network.

The MEK Resistance Units have been instrumental in organizing and leading the major protests and uprisings that have taken place over the past few years. They also motivate the rebellious young people of Iran to stand up to the regime and to work towards great change in their country.

Because of the increasing role of the MEK, the state-run media outlets in Iran have been warning the regime about the explosive state of society. The regime is right to be concerned because the people are not going to abandon their hopes for freedom. It is clear they are never going to accept the rule of the mullahs.