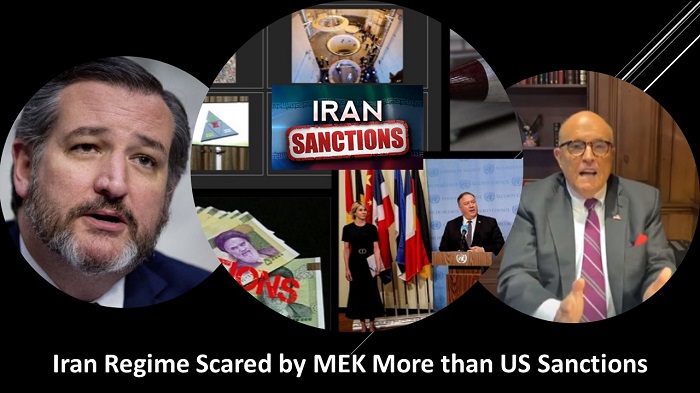 The Iranian regime was scared by the recent activation of the snapback mechanism for the United Nations sanctions, but they are significantly more terrified by the People’s Mojahedin Organization of Iran (PMOI / MEK Iran), who have been successful not just in mobilizing the Iranian people to rise up against the mullahs, but also in convincing the international community to hold the regime to account for its terrorism and nuclear ambitions.

US activated the mechanism for resuming UN sanctions that were a condition of the 2015 Iran nuclear deal. Now, the question is how the Iranian regime could prevent it? the website of #MEK #Iran, to this question last Thursday, confirming that the Mullahs’s regime is deadlocked. pic.twitter.com/KWud3L8I9J

A new article published by the state-run media outlet, the Mardom Salari daily on Saturday, shows this clearly. It begins by talking about how the MEK’s network inside Iran exposed the regime’s clandestine nuclear activities in 2002, which sparked inspections by the International Atomic Energy Agency (IAEA) and measures from the United Nations Security Council. This put the mullahs under increased international pressure.

According to #MEK #Iran, Arman’s article shows once again that the mullahs are at an international impasse and that the international community should now choose firmness against this regime. #FreeIran2020 pic.twitter.com/V1vbKzxCDT

The same thing is happening now. The MEK provided evidence of the Iranian regime violating the 2015 nuclear deal, which eventually led to the US withdrawing from the deal and finally activating the trigger mechanism to reimpose the six UN Security Council resolutions against Iran related to uranium enrichment, terrorism, and human rights.

The article read: “All these resolutions were issued between 2006 and 2010 following the treacherous espionage of the MEK against [the regime].”

This, as if the thing that was wrong was the MEK exposing the regime’s terrorism, human rights abuses, and pursuit of nuclear weapons, rather than that the regime was doing them in the first place.

Mardom Salari admitted that the US sanctions will work because of the dominance of the American economy and how other countries’ dependence on it means that if they have to choose between American and Iran, they’ll choose America.

Meanwhile, the Iranian Resistance (PMOI / MEK Iran), has been trying to raise public awareness about the regime’s ongoing terrorism and human rights violations, which might not violate the nuclear deal, but definitely endear people to the Iranian people’s fight for freedom. That’s why so many politicians and dignitaries turned up to the NCRI’s virtual conference earlier this month, including former NYC mayor Rudy Giuliani and Senators Robert Menendez, Ted Cruz, and Marco Rubio.

“It is an absolute necessity that we hold the officials of the #Iran|ian regime accountable for their torture, their human rights abuses, and their crimes against humanity,” [Sen. Ted] Cruz said at the [#FreeIran2020] summit. @tedcruz @iran_policyhttps://t.co/t3d8eEimzI

The mullahs have increased their propaganda campaigns against the MEK since the group started leading nationwide uprisings against the regime in 2017, but this really stepped up in November 2019. Some mullahs are even attempting to use the deposed monarchy and their supporters as a “distraction” to prevent people from joining the MEK and not show the international community the most viable alternative.

Since the uprising in December 2017-January 2018, when Iranian society entered a new phase of uprisings, the regime stepped up its crimes and adventures in three dimensions: #IranProtests #DisbandIRGC

Resistance leader Mrs. Maryam Rajavi President-elect of the National Council of Resistance of Iran (NCRI), said during her speech at the Free Iran Global Summit: “We pledged to overthrow the regime, take back Iran and restore all the violated and plundered rights of the people of Iran. As I have reiterated time and again, we have not come to gain something for ourselves; we have come to sacrifice and pay the requisite price. We are determined to restore freedom and people’s sovereignty in Iran, and this will happen.”