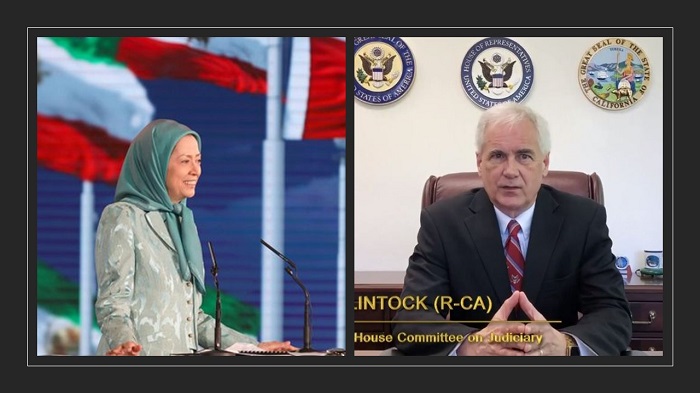 Transcript of remarks by Rep. Tom McClintock at worldwide internet conference focusing on the mullahs’ support for terrorism and shutting down its embassies- July 20, 2020.

I want to send my warmest greetings to all of the freedom fighters (Members of The People’s Mojahedin Organization of Iran (PMOI / MEK Iran))assembled today at the 2020 Free Iran Summit in Albania.  I’m Congressman Tom McClintock, representing California’s 4th Congressional District.  I want you to know that the work you are doing is not only to free the people of Iran from the thrall of the ayatollahs but also to assure the peace and security of the world from the threats and schemes of these evil men. And a special thanks to the government and people of Albania who’ve led the nations of the world in supporting and shouldering the members of the Iranian opposition, the MEK.

"…the majority of my colleagues in the U.S. Congress support a secular, democratic and non-nuclear republic of #Iran." Rep. Tom McClintock @iran_policy #FreeIran2020 #sponsored https://t.co/DWMyL8WMjg

I believe that a close relationship, open communication, and a strong partnership between the United States of America and the Iranian resistance is a vital contribution to global peace and stability.  In these turbulent times, there is at least one issue that still unites the American people, as demonstrated by the broad bipartisan support for Congressional resolutions like H.Res.374 which expresses the support of the American people and their government of the work that each of you is doing.

For over 40 years, the regime in Tehran has been terrorizing the Iranian people, abusing its power, oppressing its population, attacking its religious and ethnic minorities, and threatening world peace through its international web of terror. The world now knows and condemns the Iranian regime’s use of its embassy in Tirana, Albania to plan terrorist attacks against members of the Iranian opposition.

#Iran: The Bipartisan Majority Support for H.Res. 374 was presented at an event hosted by the @OIAC, in which several lawmakers delivered speeches. Rep. Tom McClintock, sponsor of the resolution addressed the event. #FreeIran2020 #Iranian pic.twitter.com/gmwqLvLBcu

That’s why 222 members of Congress from both parties have cosponsored my resolution, calling for the closure of the Iranian regime’s embassy in Albania. We in the U.S. Congress believe this will make all Albanians safer. I and a majority of my colleagues in the U.S. Congress support a secular, democratic, and non-nuclear republic of Iran. And I applaud Madame Rajavi (The President-elect of the National Council of Resistance of Iran’s (NCRI)), for her leadership, for representing the proud tradition of the Iranian people, and for resisting all forms of tyranny over them. My colleagues and I in the U.S. Congress are working hard to counter the Iranian regime’s threat and support President Trump for ending not only the failed JCPOA but also for placing maximum international pressure on this illegitimate and rogue regime.

The United States stands squarely with the freedom-loving people of Iran and is seeking ways to support and empower them. The United States must continue to show leadership against tyranny and the ayatollahs’ reign of terror against its own people and against the world.

Another major blow to the Iranian regime: The U.S. House Resolution 374 (#HRes374)
The bipartisan support of a majority of members of the US congress for #Iran regime change #FreeIran2020 pic.twitter.com/EVopNt6UFF

We’re calling on the United Nations to extend the arms embargo against Iran.  The international community with U.S. leadership must also reinstate snapback UN sanctions.  Without these meaningful and concrete measures, the regime will certainly escalate carnage both at home and abroad.

Your gathering today shows that the Iranian people have a vibrant opposition movement, led by Mrs. Rajavi who seeks to free Iran from the grasp of despotism. I want you to know that the American people and freedom-loving people around the world are inspired by your courage, encouraged by your success, and determined to support you in your sacred struggle for liberty.