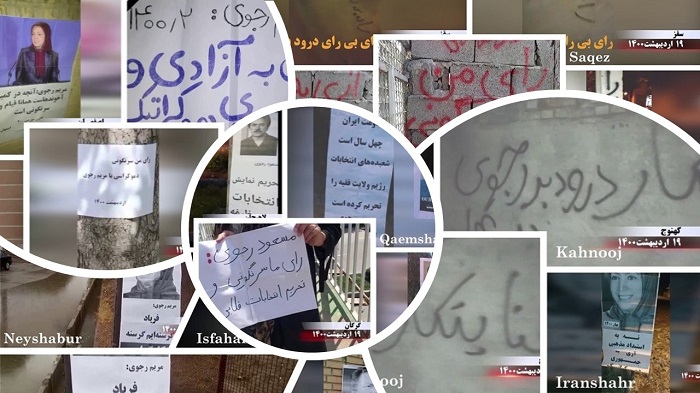 The National Council of Resistance of Iran (NCRI), and the People’s Mujahedin of Iran (PMOI / MEK Iran), reported that the Resistance Units and MEK supporters call for a boycott of the regime’s sham election.

The network of the Iranian Opposition

The network of the Iranian Opposition inside Iran organized a vast campaign calling for the boycott of the mullahs regime’s sham elections.

The network of the People’s Mojahedin Organization of Iran (PMOI / MEK Iran), held anti-regime campaigns in more than 20 cities checkered across the country.

The network of the Iranian Opposition activities is taking place against a heavy atmosphere of repression in which the regime punishes any support for the MEK with savvier punishment.

These activities welcomed by the public

The activities of the Resistance Units were widely welcomed by the public and spread on social media. These activities took place at the same time as registration days of the regime’s presidential elections that will be held in June 2021 began on Tuesday.

Many candidates are former officials of the mullahs’ regime include former regime president Mahmoud Ahmadinejad, known for his direct role in terror plots against regime opponents, and current Judiciary Chief Ebrahim Raisi, who is known for his leading role in the 1988 massacre, in which Iranian authorities executed 30,000 political prisoners.

Reformists, hardliners, the game is over

Iranian people have widely and clearly rejected all mullahs regime factions in their anti-regime protests and the slogan for example chanting: “Reformists, hardliners, the game is over,” has become very popular across Iran in recent years.

This slogan emphasizes the fact that the regime has only played with the card of the so-called reformist-hardliner standoff to mislead Iran’s international counterparts and continue its terrorist and malign behavior.

The mullahs’ regime is facing a major crisis

Now in the current situation, the mullahs’ regime is facing a major crisis toward its so-called election since the population is determined to boycott the sham elections.

The mullahs regime supreme leader Ali Khamenei acknowledged on May 11, that the regime’s main obstacle is low voter turnout. He said: “In the first place a large popular participation is important since it can turn into a security problem,”.

Cold atmosphere of the sham election

The state-run daily Hamdeli wrote on May 12, “Evidence shows that a cold atmosphere is a domination in the election ambiance.”
In this atmosphere, the activities of the MEK Resistance Units provide moral support for the Iranian people who demand regime change and the overthrow of the regime in its entirety. Therefore these brave activities aim to break the atmosphere of fear and repression.

The People’s Mojahedin Organization of Iran (PMOI / MEK Iran), reported that during April 2021, the MEK Resistance Units organized anti-regime activities in over 250 areas in 27 provinces checkered across Iran in which they called for the election boycott.