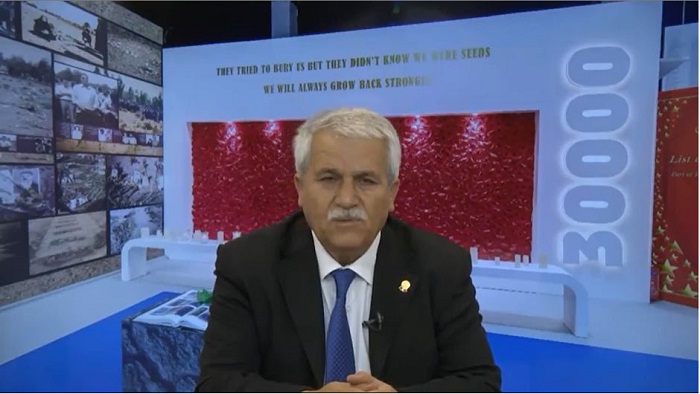 I am Hassan Zarif Nazarian. I was in Jamshidia, Evin, and Ghazal Hesar prisons for 12 years. I was in Evin prison at the time of the 1988 massacre. I have had many interviews about the 1988 massacre in the past years, and I have covered some aspects of this issue, but today I wanted to point out the less-discussed aspect in this interview.

What has been said about the 1988 massacre in various interviews by various witnesses are about Evin and Gohardasht prisons only and their observations in the death corridor in Gohardasht and the central hall in these two prisons. However, not much is said about other prisons in the country, including Vakilabad in Mashhad, Adelabad, Karun, UNESCO, and various prisons in the country, and what happened in those prisons remains a secret.

Apart from this, there are other issues. In addition to the massacre and killing of those inside the prisons, others were also subjected to this massacre and were executed at the same time. Among them were prisoners who had been released more or less one or two years before the massacre. They were also arrested again and executed.
Anyway, first I want to talk about two lists.

One list is a list of 170 types of tortures and inhumane acts exercised and perpetrated in the regime’s judiciary and prisons. The other list includes 877 people who were massacred in Evin and Gohardasht prisons during the 1988 massacre. Of course, I will explain how and under what conditions these lists were prepared and why they are not complete.

Following the massacre, it was decided that Mr. Galido Pohl, the UN Special Representative, would visit Iran’s prisons. At this time, I thought that if we could get some of the names of those executed to Galido Pohl (appointed Special Rapporteur of the Commission of Human Rights on Iran in 1986), he could have a better hand in inquiring about the case. Why?

Because at the time, Khomeini’s regime entirely denied the massacre. They did not agree to enter any discussion about the massacre, so I tried to secretly compile these lists with my cellmates including, Hossein Farsi, Mehrdad Kavousi, and Alireza Taheri-Lou.

Only about 250 people left who were not executed

Out of the two prisons of Evin and Gohardasht, there were only about 250 people left who were not executed, and we were all put in one ward. We tried to collect the statistics of those executed in those wards by referring to people who had remained from different wards.

As for Evin Prison, especially in ward 1, where I was kept previously, there were 175 of us in that ward, of whom only 15 survived the massacre. There was a ward called the “Life-sentenced” ward, which used to have about 160 prisoners. Of these, 8 or 9 survived. Ward 2 of Evin that is, of the total lower and upper sections of that ward, which had about 250 political prisoners, about 15 survived.

Of course, there were two other wards in Evin that were reserved for female political prisoners. They were about 300 plus. We did not contact them, but their relatives, such as their brothers or spouse, who were in our wards, could get information about their sisters or spouse in meetings they had inside prison. We found that most of those political prisoners in the women’s wards were executed, and only a few remained.

Anyway, this was the general information that I had about Evin Prison. The main problem was compiling a list of prisoners who were executed in Gohardasht prison. Let me mention here that we had 14 wards in Evin prison, added by two wards which were solitary confinements. From all these 16 wards, we were only able to collect the names of those executed in five wards only and did not have access to the rest.

Gohardasht prison had 24 wards. We do not know how populated those wards were and whether they were full? There was not enough information available. But we knew it had three general wards and 21 Solitary confinement wards.

Some political prisoners were kept as exiles

From the survivors of these wards, we were only able to collect the names of 9 wards. That is, we do not know how many were in other wards. For example, some political prisoners were kept as exiles from Karaj Prison. Some had been sent into exile from Mashhad Prison to Gohar Dasht prison.

There was a section called the sub-section of the Mashhadis (prisoners sent to exile from Mashhad Prison). Sub-section called Kermanshahis (prisoners sent to exile from Kermanshah Prison). We do not know whether there were others in exiles from other cities.
That is why I wanted to stress that the executions extended to vast areas in prisons, that we could only get the name of 877 prisoners.

When I was released from prison, I was able to find the names of about 306 other prisoners. I wrote a memoir called “The Secret to perseverance,” in which I have covered all of these issues. But I just wanted to point out that the 1988 massacre is not just about those who were in prison at the time and were executed. There were those who were released, soldiers who were arrested, and these were among the executions.

What was the cause? The reason was that the Khomeini regime (henchmen) had, before that, told us repeatedly that the leadership and the hierarchy of all Islamic Republic opposition groups had been destroyed and had no leadership.

There is only the Mojahedin organization, which has led and has kept its structure. And that is why they are considered a threat to the Islamic Republic. They said that we would not allow the Mojahedin to have a foothold in the country. Released prisoners, incarcerated prisoners, and their families are all considered a threat and must be demolished.

These measures were not only related to August 1988. It had started before that. That is why I want to emphasize that the 1988 massacre had nothing to do with the Eternal Lights offensive.

The regime’s goal was to destroy the Mojahedin

The regime’s goal was to destroy the Mojahedin and their organization because they were considered to be an existential threat. That’s why the massacre did not end and has continued. The massacre is not over. After the 1988 massacre, many, for instance, the “Ayaran” group in Karaj, were executed under the guise of ordinary prisoners. And this continues.

All in all, I would like to say that the 1988 massacre was to destroy a generation, to demolish the foothold of the Mojahedin Organization.
That is why I want to say that the dimensions of this massacre remain hidden. We still do not have all the news of the massacre from the prisons scattered all over the country. We only know that there are mass graves that are going through changes by the regime.

They want to eliminate the traces of their crimes. But the list of the victims will be completed before this regime will be gone. The Iranian Resistance has managed to compile the names and particulars of some 5,000 political prisoners executed during the 1988 massacre. Let’s see how many more names we will succeed to gather in the path of shedding light on the dimensions of this massacre.