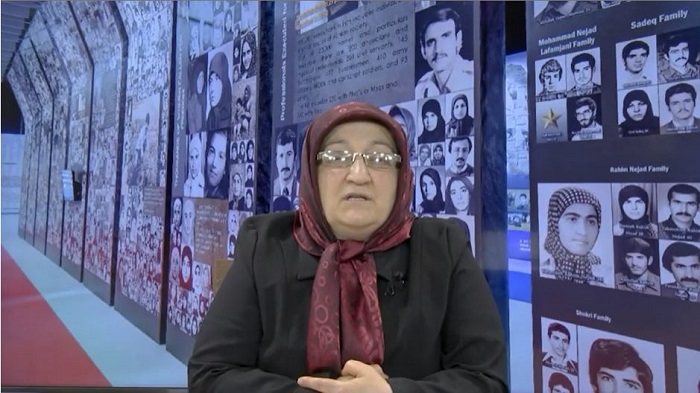 I am Khadijeh Borhani, a survivor of a family of 10 people who, after the anti-monarchy uprising of 1979, in which Khomeini rode the wave of the revolution and began killing those who opposed him and his ideas, especially the supporters of the Mojahedin-e-Khalq, MEK, including six of my brothers.

Two of my brothers were among the 30,000 executed in the summer of 1988 in Iran. One of my two executed brothers was Ahmad Borhani, a graduate in mathematics who tried to go to university during the regime’s so-called Cultural Revolution. He was not able to do so.
He was arrested in August 1981. He spent seven years in Evin Prison and was killed in 1988.

My other brother, Mohammad Hossein Borhani, who was 17 years old, was a fourth-year math student arrested on April 26, 1981, while selling the MEK newspaper. The Revolutionary Guards raided his bookstand.

A group of people was arrested in this raid and were loaded into a bus. The arrestees protested against the attack and the way they had been treated. The Revolutionary Guards started to shoot at them on the bus, and Asghar Akhavan Quds was killed in this shooting.

Hussein was sentenced to life in prison; however, after spending seven years, he was sentenced to death by the Death Committee in Gohardasht Prison, where Hamid Noury was facilitating the death sentences.

Mohammad Mehdi Borhani, was in fact, a prisoner of both the Shah and Khomeini regimes. He was arrested during the Shah’s reign in 1975. He was among many of the Shah’s prisoners who were released as the 1979 revolution took place. He was arrested again in 1982, and a week later, he was killed under torture.

My other brother, Mohammad Ali Borhani, was a genius. He was studying mining at Shahroud University. In the first couple of years of his studies, he was invited to Tehran University as an assistant professor. My brother had memorized the
Qur’an in Arabic and English.

During the regime’s so-called Cultural Revolution, he was expelled from the university and could not continue his studies. He was arrested in August 1981, and 20 days later, after being tortured, he was executed at dawn on September 9, 1981.

He had to face several mock executions during these 20 days because the regime was unsure of Ali’s political stance.

During his execution, Ali shouted, “Death to Khomeini and hail to Rajavi”. The guards immediately took him and started to severely torture him. The guards burned his back with cigarettes and etched the “Death to the hypocrites” on his body.

On the morning of September 9, he was executed. His body was handed over to the family on the condition that no memorial service be held in his memory. My father courageously ignored the order, prepared his body for proper burial, and arranged his funeral ceremony. A large number of people attend his funeral.

My other brother, Mohammad Mofidi Borhani knew about MEK since 1973. He was martyred in a clash with the Revolutionary Guards in 1988. My younger brother Mohammad Hassan Borhani was 14 years old.

On July 1, 1981, he was arrested while selling the MEK publication. He was kept in prison for three and half years without being sentenced.

Eventually, he was released. We both decided to go to Ashraf together. Later, he was martyred in a clash with the Revolutionary Guards in 1988.

I was arrested for supporting the MEK at the age of 12. During the arrest, thirty of the Revolutionary Guards led by Ahmad Aghaei attacked our home. They searched and destroyed many parts of the house.

My family was against Khomeini’s regime

My two brothers and I were taken to prison. They had no evidence or witnesses against me. Due to my father’s complaints and follow-ups, I was released on bail to the account of our house and one million tomans.

Because my family was against Khomeini’s regime, my father was under a lot of pressure and harassment. Our house was set on fire several times by the regime, and we were continuously bothered by them, day and night.

My father went to Ashraf in 2003, and when he returned, he was severely harassed and suffered a heart attack and died due to the pressure exerted by the regime.

The regime had prevented any burial ceremony for him. Regardless of what the regime had wanted, it is said that 100,000 people were present at his funeral.

My mother suffered a heart attack during the Shah’s time when my brother was arrested and suffered a partial stroke on one side of her body.

She was hospitalized for six months. As mentioned above, the regime had put an immense amount of pressure on our family. All this pressure and intimidation caused my mother to experience heart strokes eight times.

When my two brothers, who were executed in the summer of 1988, were arrested, my parents went to different prisons, hoping to find out about their sons.

They had not heard from them in eight months. My mother was not able to find any information about my two brothers. She was arrested a few times. At one point, the guards hit her leg with a metal bar. She was injured badly and had to wear a cast on her leg for weeks.

Raisi was a member of the Death Committee

As a result of the pressure exerted on her by the regime, she had developed Parkinson’s disease and later passed away. Mino Mohammadi, my brother’s wife, was martyred in the massacre of 1988 in Qazvin. Mohammad Mehdi Borhani’s wife also was martyred in August 1982 under torture after a week of her arrest.

This is Ahmad Borhani, who was martyred in a massacre in 1988 in Evin Prison, where Raisi was a member of the Death Committee and is responsible for these lost lives.

Hamid Nouri was the executor

This is Mohammad Hossein Borhani, who was executed in the massacre of 1988 in Gohardasht Prison, where Hamid Nouri was the executor.

This is my younger brother Mohammad Hassan Borhani who was martyred in a clash with the Revolutionary Guards in 1988.

This is my father, who came to Ashraf in 2003, suffered a heart attack caused by all the pressure the regime had imposed on him and the whole family. And finally, this is my mother, who also passed away.