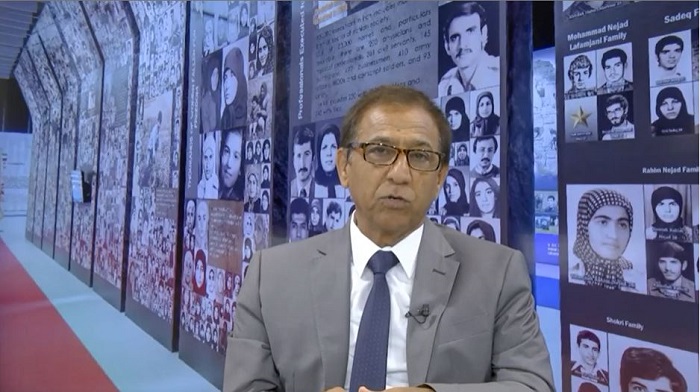 I am Mohammad Sar Kheyli, born in 1955 in Abadan. I was imprisoned in Evin and Gohardasht prisons from 1984 to 1993. In 1988, the criminal Khomeini executed 30,000 MEK prisoners and executed them according to his explicit fatwa.

The victims were the ones who stood firm on their positions, their beliefs, and their MEK identity. This fact was also acknowledged by the death commission in the presence of Khomeini’s deputy, Mr. Montazeri.

I was imprisoned in Evin Prison from 1986-1987. At that time, Lajevardi was replaced by Razini as the new head of the prison. Razini had chosen a deputy named Ebrahim Raisi, who is now the president of the regime.

My brother Gholamreza Sarkhaili and my cousin Abbas Sahraei were arrested in 1981-1982, and we didn’t think they might be executed.

But Raisi sentenced them to death.
Many of my cellmates who were my very close friends, such as Mahmoud Bani Najarian, Muzaffar Izadi, Kourosh Khavarian, Hamid Hosseini, and Afshin Baradaran Ghasemi, who was only 16 years old, were executed. One of my friends that I remember a lot is Ahmad Moghimi Zanjani.

Ahmad Moghimi Zanjani had received more than 6,000 lashes. I do not know how to say this because I witnessed it myself and saw his feet. There was nothing left of his feet.
There was no toe left, no nails, no flesh. It was just a piece of bone with skin on it that had been taken from his leg. But even with that condition, Raisi sentenced him to death in 1985.

Hamid Nouri, who is currently on trial in Sweden

In September 1983, I was in Evin Prison, ward one. There, Hamid Nouri, who is currently on trial in Sweden, was our prison guard. I know him very well.
He repeatedly pulled me out of my cell and tried to force me to repent and then work for him.

In 1984, I was interrogated in Branch 3 of Evin Prison. The senior interrogator of Branch 3 was a person named Mohammad Moghisei or Nasserian who everyone knows to be a blood-thirsty of the MEK during the massacres.
He had two deputies, one of whom was a person named Daneshjoo and the other was Hamid Nouri. These three people were torturing me.
Let me tell you how I was tortured: I was tied to the bed; my legs and arms were tied tightly.

Inserting a blanket into my throat

Nasserian was sitting on my back, pulling my neck back and inserting a blanket into my throat, and squeezing my throat.

Meanwhile, another interrogator was flogging me.

I was thinking to myself at that time what they want to do to me and they definitely want to kill me here. Whenever I got to the point that I was suffocating, Nasserian lifted his hands from my throat, and I felt the pain of the whip all over my body and I started screaming very annoyingly.

I was forced to run on the sand

After that, I was forced to run on the sand that had been poured on the ground and I was whipped at the same time.

Every sand pierced into my feet like a nail, and at that time I felt severe pain and did not know what to do in that situation.

In the period of the massacre in 1988, I was in Gohardasht prison and in ward 1.
Nasserian and Hamid Nouri, who was his deputy, and Lashkari, who was the head of the prison at the time, came to our ward and said that the ward should be emptied. Then they took about 60 of us.

They gathered us in the yard and took us to the jihad ward and asked us the same three questions they used to ask in the court. We did not know at the time that this was a court, but it really was a court. Out of the 60 people they took, 45 were executed and we never saw them again.
Another example in Evin Prison: There were 34 of us who had contact with each other at the time. I saw only 4 out of those 34 after the executions.
All of them were executed on charges of supporting the Mojahedin and being loyal to their cause.

We neither forgive nor forget and call on the international community that not only Hamid Nouri but also Raisi and Khamenei should be brought to justice for the massacre.