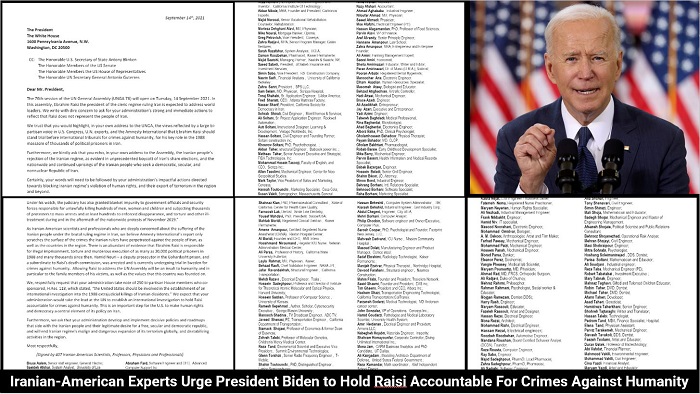 The Iranian Professionals’ Ad Hoc Committee on Iran Policy sent this open letter to President Biden, emphasizing that Raisi does not represent the Iranian people. On the eve of Raisi’s speech at the United Nations General Assembly on September 20, this letter was published.

The letter’s authors emphasized, “we expect your administration to take the lead at the UN in establishing an international investigation to hold Raisi accountable for crimes against humanity.  This is a crucial step for the United States in making human rights and democracy a fundamental component of its Iran policy.”

The authors of this letter primarily emphasized Raisi’s role in the 1988 massacre of over 30,000 political prisoners, which has been regarded by several legal and human rights experts as a “crime against humanity” and “genocide.”

“Iranian-American scientists and professionals are deeply concerned about the Iranian people’s suffering under Iran’s brutal ruling regime. We are deeply concerned that Ebrahim Raisi, who is responsible for the illegal imprisonment, torture, and murderous execution of up to 30,000 political prisoners in 1988 and many thousands more since then, is addressing the UN General Assembly while the Iranian people have already rejected him,” said Professor Kazem Kazerounian, one of the letter’s organizers and coordinator of the Iranian Professionals Association.

The co-signers of this letter urged President Biden

The co-signers of this letter urged President Biden to emphasize in his address to the UN General Assembly the views expressed by a large bipartisan voice in the United States Congress, U.N. experts, and Amnesty International that Raisi is on trial for crimes against humanity before international tribunals.

The letter’s co-signers also emphasized the Iranian people’s rejection of the regime in its entirety, as demonstrated by the widespread boycott of the regime’s faux presidential election on June 19, as well as two big Iran protests in 2018 and November 2019.

The suffering of the Iranian people

The letter continued, “As Iranian-American scientists and professionals deeply concerned about the suffering of the Iranian people under Iran’s brutal ruling regime.”

“Furthermore, we ask that your administration develop and implement decisive policies and roadmaps that side with the Iranian people and their legitimate desire for a free, secular, and democratic republic, and will end Iranian regime’s malign and dangerous expansion of its terrorism globally, and destabilizing activities in the region.”

“The fact that Ebrahim Raisi has risen to the presidency rather than being investigated for the crimes against humanity of murder, enforced disappearance, and torture is a grim reminder that impunity reigns supreme in Iran,” Amnesty said in part.