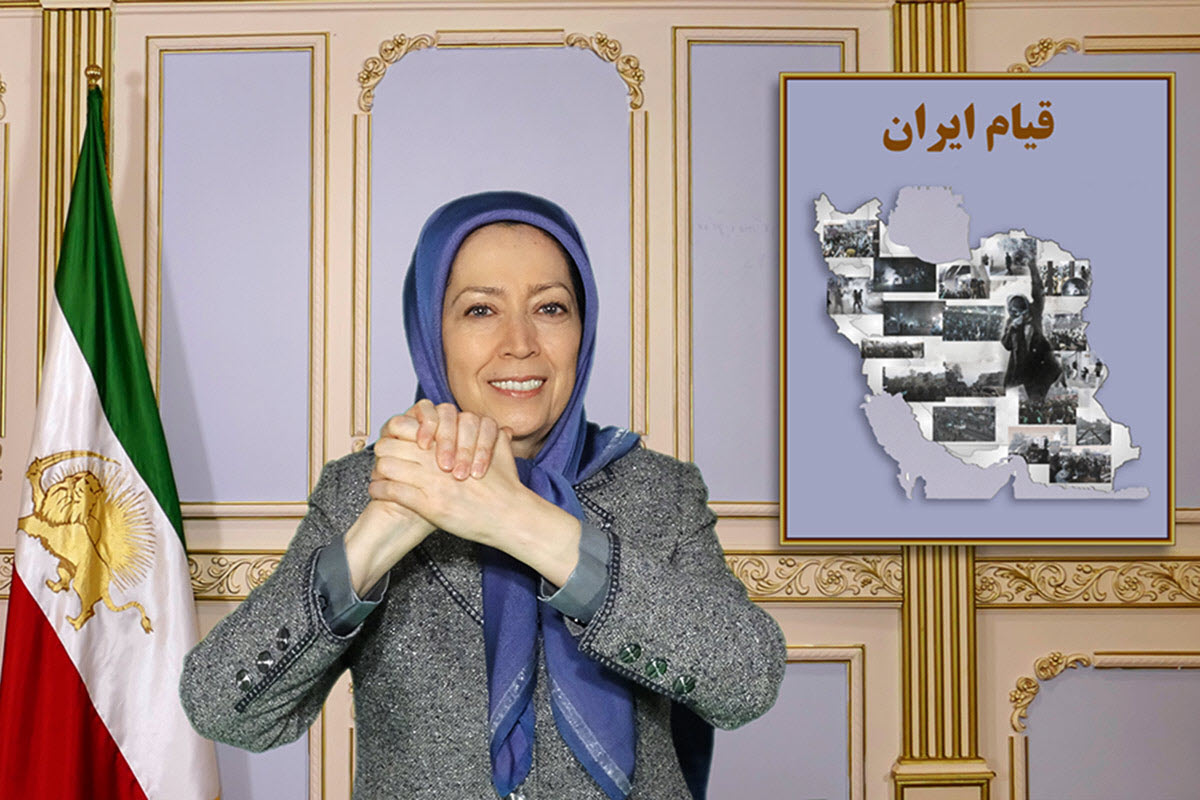 Leader of the hypocrites, in a televised message addressed to the demonstrators, claimed that they had to expand the insurgency centers 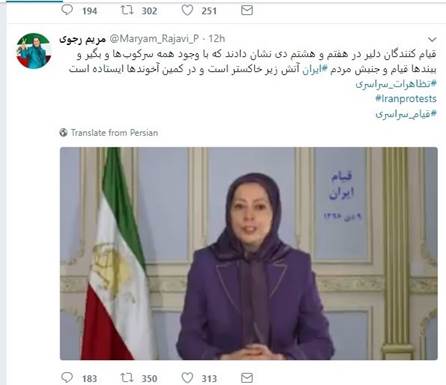 Maryam Rajavi, the head of the group of the hypocrites, in a message posted on her Twitter account, while taking advantage of recent demonstrations in some Iranian cities, called for riots and violence.

The head of the hypocrites claimed that it is now the time for expansion of rebellious centers, the call by the hypocrites indicates more than anything that the protests which were supposed to criticize the economic situation have been diverted from their path.
In the past, during the 2009 riots, the hypocrites’ group by issuing statement had supported the unrest inside the country.

According to Tasnim, on Saturday afternoon, by holding several gatherings to criticize economic issues in cities like Mashhad, Tehran and some provincial centers, small groups of people attacked government centers, banks and destroyed public premises.

Fars News Agency 30/12/2017:
In the statement issued by the Council for Coordination of Islamic Publicity on the occasion of the December 30th, it has been stated that:
Iran’s brave and intelligent nation once again on December 30th will show that it has and will be standing against the hypocrite and seditious currents, and they oppose those who are against Ashura, and hypocrites and seditionists. They are ready in all the scenes to support Velayat-e-Fagih, Revolution and Islam.

The commemoration ceremony of the eighth anniversary of December 30th will be held at the offices of the Council for Coordination of Islamic Publicity and its affiliated institutions and organizations throughout the country, with a special ceremony in Tehran.

Fars News Agency 28/12/2017:
Commander Abnush: Country’s economic bottleneck is in the hands of opponents of the Islamic Revolution:
Abnosh continued saying that today there is no difference between the heads of sedition and Massoud Rajavi.

Fars News Agency, 29/12/2017:
IRGC Brigadier General Mohsen Rezaee, secretary of the Expediency Council, and former head of the Islamic Revolutionary Guards Corps, in an article titled » Practical Response instead of Verbal Therapy« wrote : The problem of high cost and the challenge of financial and credit institutions is serious … In any protest, it may be possible that hypocrites (referring to PMOI/MeK) and seditionists intrude but the people do not repeat their slogans, in return, the government and the parliament have to solve the problems. Inefficiencies cannot be compensated by words.

It’s not right to increase fuel price and other items without raising the incomes of the people, the government and the parliament must give satisfactory answers to people’s protests.

Fars News Agency, 29/12/2017:
“Hassanzadeh, Commander of the Quds Force’s Sarallah Headquarters, said: “The main objective of the enemy in the past and future sedition, has been and will be to bring down the regime and the Islamic revolution, and the change of the nature of the regime, the elimination of unity between the people and Officials of the system.”

ILNA News agency, 29/12/2017:
The Secretary of the Expediency Council reacted to recent protests in some of the cities. According to ILNA, Mohsen Rezaii wrote on his Twitter: “There is a difference between those who protest because of high prices, inflation, unemployment and the hypocrites and opponents of the regime.”

Deutche Welle Radio, 30/12/2017:
“According to reports, Alam-al-Hoda (Friday Prayers Leader in Mashhad), referring to the PMOI/MeK leader Maryam Rajavi, said, “it is not right that some people at the gathering were saying Leave Syria and think about us, and then a woman who is the leader of the hypocrites thanks you, and we should not feed enemy’s media.”

Fars News Agency, 30/12/2017:
Reza Seraj, an IRGC intelligence official: recent protests around the country represent the people’s dissatisfaction from the current situation and their dissatisfaction with the government’s unfulfilled promises. The protests are a prelude to the upcoming year’s Budget Bill which generates inflation. On the other hand, the slogans against the regime’s structure in the recent protests indicate that of the White House’s power center plan for regime change is being implemented by the hypocrites.

Prior to this, White House officials, had been quoted saying that a change in Iran is possible through economic recession combined with social and ethnic rebellions.

People must bear this in mind and vigilant in their demands and protests not to complete the puzzle of the hypocrites and the tricksters.

Islamic Azad University News Agency (ANA), 31/12/2017:
Head of the Center for Strategic Studies and Future Studies: Dealing with mishandling of Livelihood Problems to Launch Chaos by Arrogant and Hypocrites.

Head of the Center for Strategic Studies and Future Studies said: “In recent gatherings, which are often a matter of demanding and challenging the current economic and livelihood problems, some want to achieve their evil intentions by stirring up riots and chaos.”

Commander Mohammad Amirkhani at the ceremony of commemorating anniversary of December 30th at Islamic Azad University of Ardabil, referring to messages sent by members of the U.S Congress in support of recent demonstrations, said that it was due to the coordination between rioters and them: “It is clear from recent moves that this time, by instigating a new sedition to achieve goals through popular demands.
” Amir Khani added, “broadcasting peaceful demonstrations of people in various cities of the country through the TV networks of the hypocrites in France shows that recent riots have been coordinated by arrogance.”

Fars News Agency, 31/12/201:
Zarei, head of the country’s mobilization of lecturers at Tarbiat Modares University, said: “Philosophical hermeneutics, technocrat’s practical knowledge, and infiltration by the hypocrites are the faces of future intrigues.

He said that with his religious and revolutionary background, the president can manage the new sedition by inviting jihadist and revolutionary thinkers to manage the country’s affairs, because the future post-modern sedition, with the three sides of the philosophical hermeneutics, technocrat’s practical knowledge and infiltration by the hypocrites do not contain any model for running the country.

Tasnim News Agency, 30/12/2017:
A series of popular gatherings in Tehran and some other cities was turned into riot in a pre-designed effort by unknown individuals. In some cities, films and clips on social media shows that protesters were showing their dissatisfaction with the high cost of livings and asking for economic reform, but some people came out and attacked government centers and banks, this is exactly the same thing that happened in 2009, the counter-revolutionaries and hypocrites (PMOI/MeK) designed and implemented.