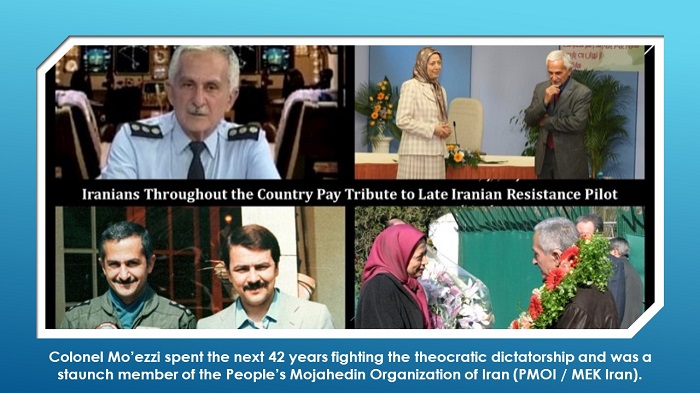 The National Council of Resistance of Iran (NCRI), and the People’s Mojahedin Organization of Iran (PMOI / MEK Iran) report that one of Iran’s most respected and courageous pilots, Colonel Behzad Mo’ezzi, has died from leukemia in Paris. Mo’ezzi was Iran’s most experienced pilots after the Iranian Revolution of 1979. When Massoud Rajavi left Tehran in198, it was Moezzi who flew him to Paris. It was a seminal moment for the pilot who said it was the most important flight he had made.

(#NCRI) and (#MEK #Iran): The people throughout Iran mourned and paid their respects to the courageous Iranian Resistance pilot, Colonel Behzad Mo’ezzi.https://t.co/2p41QACjud pic.twitter.com/Oe7nnnGQMJ

Colonel Mo’ezzi spent the next 42 years fighting the theocratic dictatorship and was a staunch member of the People’s Mojahedin Organization of Iran (PMOI / MEK Iran). He was also a MEK delegate in the National Council of Resistance of Iran (NCRI) coalition.

He has been praised widely in Iran and by Iranian Resistance spokespersons. Maryam Rajavi, the NCRI’s president-elect, said that she hoped that other young Iranians will see Colonel Moi’ezzi as a role model. She gave her thanks to the pilot for his great service, heroism, and loyalty.

#MaryamRajavi said the following words about Colonel Behzad Mo’ezzi. She viewed him as the heroic Mojahed pilot who refused to give up hope on the return flight to Tehran. She said he now has that unbridled status of joining other martyrs.. https://t.co/2p41QACjud #MEK #Iran pic.twitter.com/VQtL897Mba

Many Iranians called up Simaye Azadi (INTV), the Iranian Resistance’s satellite TV channel, while it was airing a telethon fundraiser program. They expressed their condolences and messages of solidarity with statements like: “Hail to the brave pilot, Behzad Mo’ezzi, he was the pride of the Air Force and military personnel and MEK sympathizers.”

The INTV itself got a boost from the MEK’s network of Iranian Resistance Units. Activists erected banners, inscribed slogans, and other messages showing their support for the INTV, such as “INTV is the voice of Iran protests, of freedom-loving people of Iran living under the mullahs’ repression, and a hope for victory in darkness.”

#NCRI and #MEK : Iran’s people express support for opposition despite intensified repression and the Covid-19 crisis. network inside Iran, organized a campaign supporting the INTV telethon. In cities throughout #Iran pic.twitter.com/b3VLG7Xy4P

The INTV telethon was the 25th in a series. Iranians give financial support, as well as moral support to the resistance movement. This is a brave thing to do, as callers may risk arrest and imprisonment if they are found to have supported the Iranian opposition. The mullahs regard any support for the MEK as being anti-God. Many who are charged with this offense are eventually executed.

This most recent INTV telethon even got support from political prisoners in Evin Prison who managed to send a letter of support.