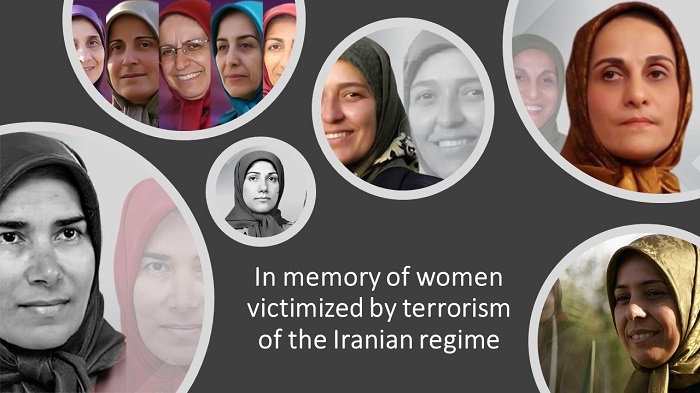 Iranian women have historically been the most oppressed by the clerical regime. They are subjected to significantly greater limitations and deprivations than men. They do, however, have “equality” in terms of executions, arrests, and torture.

Women are the first to pay the price

Women are the first to pay the price in every political standoff and economic crisis. The regime’s widespread terrorism, on the other hand, has no pity for female opponents.

On August 21, the International Day of Remembrance and Tribute to Terrorism Victims, Iranian women victimized by terrorism for their opposition to the clerical regime in Iran are paid tribute.

Massacre on September 1, in Camp Ashraf 013

Iraqi mercenaries of the Iranian regime infiltrated Camp Ashraf on September 1, 2013, bent on slaughtering more than 100 PMOI members based there. They killed 52 of them, including six women, and abducted 7, including another six women. No information has been available on the fate of the hostages to date.

Terrorists dispatched to Baghdad by the Iranian Intelligence Ministry opened fire from behind on a van carrying five women members of the People’s Mujahedin of Iran (PMOI / MEK Iran), on the morning of May 17, 1995, and escaped.

In this attack, Effat Haddad and Fereshteh Esfandiari were murdered, and Sedigheh Khodaii Sefat was gravely injured.

Effat Haddad had four children, ranging in age from 9 to 14. She was a member of the National Council of Resistance of Iran (NCRI) and one of the National Liberation Army of Iran’s logistics officials (NLA).

Fereshteh Esfandiari worked as a broadcaster for the PMOI’s Voice of Mojahed Radio for many years.

Effat Haddad and Fereshteh Esfandiari were among the first women in foreign nations to be victims of Iranian regime terrorism.

On February 9, 2013, Pouran Najafi and five other PMOI militants were murdered in the first missile attack on Camp Liberty. Approximately 3,000 members of the PMOI who were protected under the Fourth Geneva Convention were housed at Camp Liberty.

Pouran Najafi, who was born in Rasht in 1960, had a daughter and a son. She had spent five years as a political prisoner in the religious regime’s jails and had written a book about her experiences and what she had experienced while there.

On the night of February 21, 1996, Zahra Rajabi, who had traveled to Turkey to attend to the situation of Iranian refugees in that country, was assassinated in Istanbul by the Iranian regime’s terrorist diplomats and three other terrorists directly sent by the Intelligence Ministry in Tehran to carry out this mission according to a plan approved by the regime’s Supreme Security Council.

In today’s world, the Iranian dictatorship is the central banker of terrorism. Terrorism is the regime’s lifeblood, character, and essential nature.

On the one hand, there has always been a direct link between the escalation of upheavals and the intensification of social and economic issues, and on the other hand, the turn to terrorism.

450 acts of terrorism outside of Iran

Since 2001, the Iranian Resistance has documented more than 450 acts of terrorism committed by the regime outside of Iran.

Many terrorist plots and operations have been carried out by the clerical dictatorship in the last two years.

The two terrorist schemes against the Iranian Resistance that the regime pursued in the spring and summer of 2018 are the regime’s greatest terrorist designs in Europe in its 40-year history.

The expulsion of operatives of MOIS from the EU and US

Under the cover of quiet and ignorance, the regime’s terrorism thrives and spreads. It’s past time to put a stop to everyone’s ignorance concerning the world’s security and peace.

The expulsion of operatives of the regime’s Ministry of Intelligence and Security (MOIS) and the Islamic Revolutionary Guard Corps (IRGC) from their nations must be made easier in Europe and the United States.

Any serious action done against this dictatorship, anywhere in the world, will benefit the Iranian people’s and women’s battle for regime change and is consistent with international peace and security.

The dictatorship is pursuing nuclear weapons while carrying out repression, executions, and massacres inside Iran and sparking conflicts across the Middle East. It is because of this that it poses a severe danger to global peace and security.