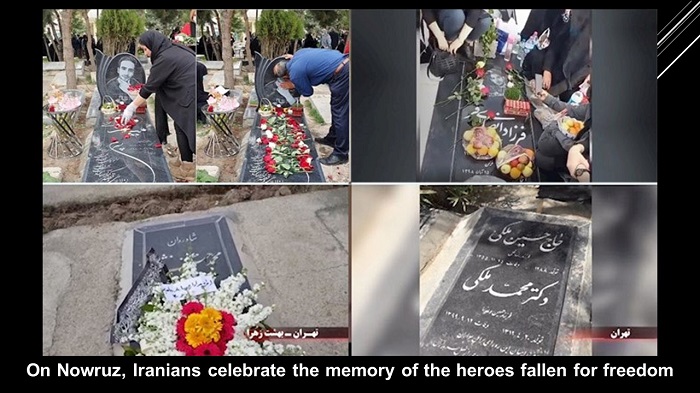 People across Iran have paid homage to the countless heroes who have laid their lives down to bring freedom and democracy to Iran.

The founders of the People’s Mujahedin, Mohammad Hanif Nejad, Ali Asghar Badizadegan, and Saied Mohsen, were executed by the Shah regime in 1972 after undergoing severe torture in the prisons of the Shah regime’s intelligence arm called SAVAK.

MEK Resistance Units in Tehran laid flowers on the grave of Dr. Mohammad Maleki, who passed away on December 2, 2020.

Dr. Maleki was the first chancellor of Tehran University after the 1979 anti-monarchical revolution. Dr. Maleki was very popular among the Iranian people for his pro-democracy activities and protesting the tyranny of the mullahs’ regime ruling Iran. He was a vocal supporter of the (PMOI / MEK Iran) and had been arrested by security forces for his criticism of the mullah regime.

In Tehran, the MEK Resistance Units placed flowers on an unmarked mass grave where several (PMOI / MEK Iran) martyrs had been buried by the regime.

The MEK Resistance Units celebrated the memory of (PMOI / MEK Iran) martyrs by laying flowers on their graves in Hamedan, Bushehr, Tehran, and Shiraz.

The martyrs of Iran’s nationwide uprising

On the occasion of Nowruz the Persian New Year, people are celebrating the memory of loved ones killed by the regime during a nationwide uprising.

The video message of, the mother of Mehrdad Moein-far, killed by the regime’s security forces during the 2019 protests. She said: “I am the mother of Mehrdad Moein-far. I wish a happy New Year to all my compatriots. I ask the people to not stand by and watch the injustice and tyranny, just as Mehrdad decided not to. I wish peace and happiness for all the people of my land.”

In Behbehan, the family and friends of Farzad Ansari, killed by security forces in the 2019 protests, gathered at his grave and honored his memory.

In Karaj, the family friends of Milad Mohagheghi, another martyr of the 2019 protests, gathered at his grave and paid homage by laying flowers on his grave.

Visiting graves of the heroes killed during IranProtests, a tradition in Iran and by the people ahead of the ticking hours for Nowruz