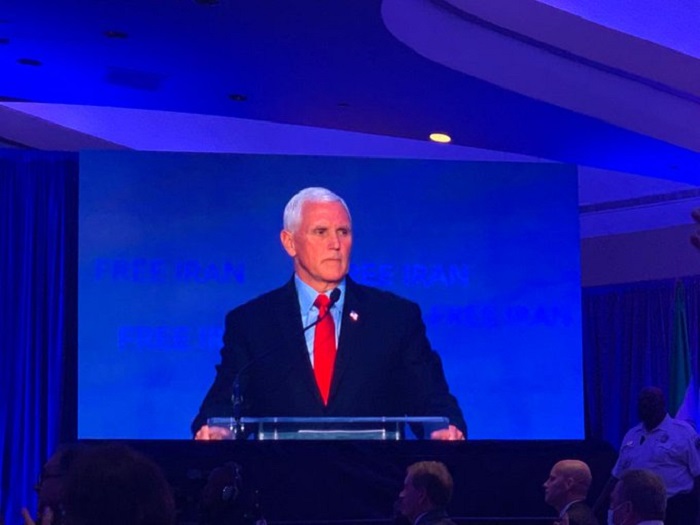 On Saturday, the US President, the United Kingdom, Germany, and France informed Iran that it was not too late to continue nuclear discussions and reverse direction on “provocative steps” such the development of highly enriched uranium and enriched uranium metal, which are “critical to nuclear weapons programmes.”

“When we came in, Iran had benefited from the Obama-Biden administration’s approach, the JCPOA (The Joint Comprehensive Plan of Action on Iran’s Nuclear Ambitions) delivering pallets of cash to the Mullahs in Iran, sanctions relief,” Pence said at a separate conference held by the National Council of Resistance of Iran (NCRI) in Washington, DC.

Despite the fact that Iran was sowing instability across the region on the day we were inaugurated in 2017, it was nearly impossible to count every place where Iran was sponsoring terrorist activity.”

“We stood against their tyrannical regime, as perhaps no administration had done in the modern era,” he said, citing the cancellation of Iran’s nuclear deal, which had “flooded the regime’s coffers with tens of billions of dollars used to repress its own people and support deadly terrorist attacks across the region,” crippling sanctions, and the assassination of General Qassem Soleimani, head of the Quds Force. “On the day we left office, the Iranian regime was more isolated than ever before.”

Withdraw from the nuclear deal in 2018

When President Trump declared his intention to withdraw from the nuclear deal in 2018, he explained how the international community reacted.

“I think that it is a real testament to President Trump’s determination to follow a posture of strength, to confront the malign activity of Iran in the region, to abandon the politics of appeasement toward the Ayatollahs and also ultimately to keep a promise that we made to the American people and to the world,” Pence added.

He claimed that the regime’s decision to install Ebrahim Raisi as president reflected the regime’s “growing desperation and vulnerability” in the face of mounting protests across the country.

Responsible in 1988 for the massacre

“Thirty years ago, Raisi was in charge of the Ayatollah’s death squad, and he’s now the President of that country, a brutal mass murderer responsible in 1988 for the massacre of 30,000 political prisoners,” he said, referring to the massacre of tens of thousands of mostly political dissidents, most of whom supported the non-fundamentalist People’s Mojahedin of Iran (PMOI / MEK Iran)

The meeting, which drew tens of thousands of Free Iran activists and a slew of US leaders from both parties, included:

“We are convinced that it is possible to quickly reach and implement an understanding on return to full compliance and to ensure that Iran’s nuclear program is exclusively for peaceful purposes for the long term,” the statement said, noting that this would provide crucial sanctions relief, but that this would only be possible “if Iran changes course.”

The current administration’s embrace of the JCPOA

Pence, on the other hand, cautioned that the Biden administration’s approach could empower the dictatorship to put the US to the test.

“With the current administration’s embrace of the JCPOA, their hesitation to condemn rockets being fired at our cherished ally Israel, the heart-breaking and disastrous withdrawal from Afghanistan, our adversaries may be sensing weakness. Hey maybe emboldened to test our resolve, “he said.

“And in fact, they’ve already begun to do so with reports of an Iranian drone attack on a US base in Syria… Weakness arouses evil.”