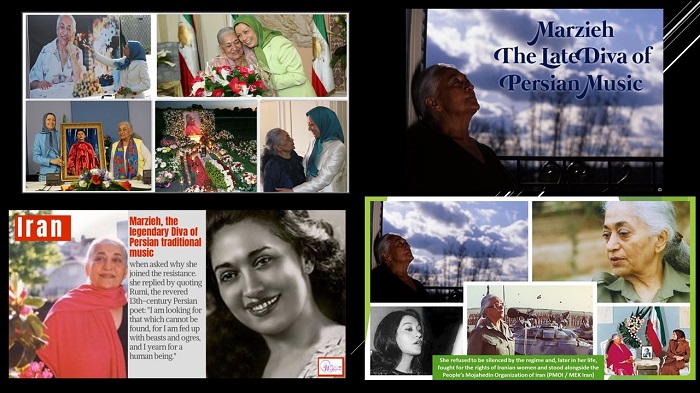 Ashraf os-Sadat Marzieh was a Persian traditional music performer who was born in Tehran. Her voice, known as the great diva of Persian traditional singing, symbolized a nation’s 60-year sufferings and the strength of Iranian women in the midst of mullahs’ misogyny and stoning.

Her parents were artists, and among her family were sculptors, painters, miniature artists, and musicians. Her mother encouraged her to sing and supported her creative endeavors throughout her life, whilst her father wanted her to attend school and study science and music theory. She studied the art for several years under the guidance of the world’s greatest Persian musicians.

Marzieh began her career in the early 1940s and was a constant presence on the radio and in concert for decades. She’s sung for a number of world leaders throughout the years, including Queen Elizabeth II, Charles de Gaulle, and Richard Nixon. Her first significant public appearance was in 1942 when she played Shirin in the Persian operetta Shirin and Farhad at the Jame’e Barbud opera theatre.

Marzieh was denied the opportunity

Following the toppling of the Shah in 1979, Iran became a theocracy led by Khomeini. The country’s hardline clergy considered the arts, especially music, to be antithetical to the new order. Marzieh was denied the opportunity to perform because she was a woman and an artist. She retreated to her farm in the countryside and did not sing in public for a decade and a half.

Marzieh was advised that she could only appear in front of female audiences during this time. She found this restriction intolerable and continued her silence, practicing in the privacy of her own home. “I sang for the birds, the river, the trees, and the flowers, but not for the mullahs,” she told The Washington Times in 1995.

Marzieh defected in 1994 while visiting Paris

Marzieh defected in 1994 while visiting Paris. She met Maryam Rajavi, President-elect of the National Council of Resistance of Iran (NCRI). She was particularly impressed by the important role women played in the People’s Mojahedin of Iran (PMOI / MEK Iran)

The MEK’s commitment to democracy and women’s rights inspired her to continue public performances in support of the Iranian Resistance. She served as an art adviser to Mrs. Maryam Rajavi for many years, until her death.

Marzieh, who had been essentially apolitical as a young lady, was frequently asked by interviewers what had prompted her to join the resistance. In a 1999 interview with The Scotsman, she quoted Rumi, the famed 13th-century Persian poet, saying, “I am looking for that which cannot be found, for I am fed up with beasts and ogres, and I yearn for a human being.”

Marzieh was not just a pioneering and iconic singer, but also an intelligent woman who rose to popularity in the 1940s by breaking cultural barriers and defying conservative prejudices. When she joined the Iranian Resistance, she pushed for more rights for Iranian women.

Her writings have resonated with all Iranians, particularly women, for decades. Marzieh was the first woman to perform on The Colorful Flowers, Tehran’s most popular radio program at the time, and she was frequently asked to perform with Persian music masters.

Indeed, her reverence for Islam and her contempt for the religious fanatics who rule Iran are symbolized in a masterful recording of the Azan, the Muslim call to prayer. She is the only Iranian woman on record to have successfully done so.

Marzieh died of cancer on October 13, 2010, in Paris, however, she will live on as an inspirational figure in the hearts and thoughts of the Iranian people.