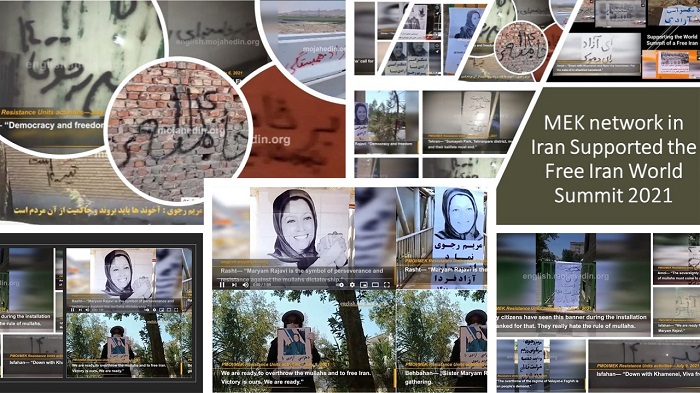 The Banners of PMOI/MEK Resistance Units are enjoying public support according to reports by MEK supporters.

These activities come just days before the “Free Iran World Summit 2021,” the largest-ever online international event dedicated to liberating Iran from its oppressive religious dictatorship and paving the path for a free, democratic, and sovereign future.

Solidarity with the Iranian people

Pro-democracy activists inside Iran, lawmakers, former senior government officials, distinguished personalities, and humanitarians and advocates from around the world will stand in solidarity with the Iranian people’s unflinching struggle for freedom.

“Maryam Rajavi is the symbol of perseverance and resistance against the mullahs’ dictatorship.”

“Maryam Rajavi is the symbol of a free Iran.”

“Madam Maryam Rajavi, we support your gathering. We are ready to overthrow the mullahs and free Iran. Victory is ours. We are ready.”

“We are ready for democracy and freedom with Maryam Rajavi.”

“Down with Khamenei, Viva freedom!”

“Democracy and freedom with Maryam Rajavi”

“Overthrow of the [mullahs’] regime is the Iranian people’s demand.”

“Sovereignty belongs to the people and the mullahs’ rule must come to an end.

Locals residents have seen this banner during its installation and thanked us for putting it up. They really hate the ruling mullahs.”