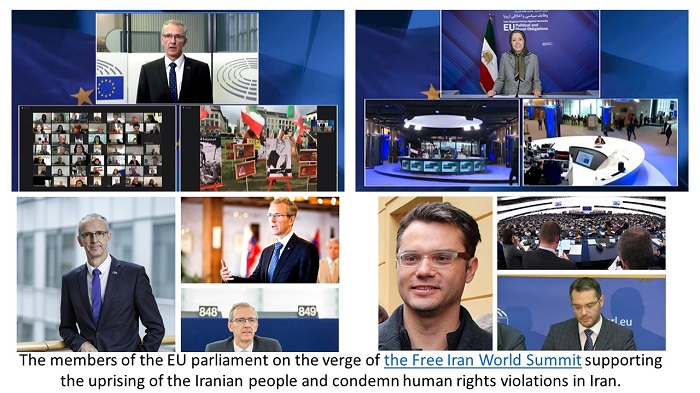 The National Council of Resistance of Iran (NCRI), and the People’s Mujahedin of Iran (PMOI / MEK Iran) reported that the members of the EU parliament on the verge of the Free Iran World Summit, supporting the uprising of the Iranian people and condemn human rights violations in Iran.

Ivan Štefanec – Member of the European Parliament from Slovakia: The presidency of the ‘massacre of 1988’ is very worrying. He was involved in the 1988 massacre of more than 30,000 political prisoners, mostly members of the Mojahedin Khalq, and the massacre of 1,500 people in November 2019. The Iranian people and the Mojahedin resistance units throughout Iran are preparing for the next uprising.

Transcript of video message sent to the participant of Free Iran gathering by Ivan Štefanec:

It is a very happy time for me to be able to address the annual meeting of the National Council of Resistance of Iran, the ‘Free Iran Summit’.

The presidency of Ebrahim Raisi, as the Iranian people call him, ‘the stronghold of the ‘1988 massacre,’ is very worrying. Over the past four decades, Raisi has been involved in some of the worst forms of repression, torture, murder, and crimes against humanity against Iranian women and youth, especially members of the Mojahedin Khalq Organization as the regime’s main opposition.

Raisi was a member of the Death Commissions, which executed more than 30,000 political prisoners, mostly members of the Mojahedin Khalq. His most recent record is as the head of the clerical regime’s judiciary, killing more than 1,500 people in November 1998 and arresting, detaining, and torturing at least 12,000 insurgents.

Recent research in US and British universities shows that the death toll in the November 2019 uprising was three times higher than the statistics, which means that it was a serious crime that we condemned and demanded the release of all its prisoners.

The Iranian people have stood up. The Resistance units of the People’s Mojahedin of Iran are very active throughout Iran. They are preparing for the next uprising because they can no longer tolerate this regime.

The Iranian people use every opportunity to make their voices heard every day. Therefore, I believe that we in Europe must stand by the Iranian people and no longer allow the European Union to turn a blind eye to the Iranian regime’s human rights violations and terrorism, and to pursue a policy of appeasement that undermines Europe’s credibility.

Stanislav Polčák – Member of the European Parliament from the Czech Republic: The Iranian people said ‘no’ to the rigged elections.

Now the world must choose whether it is in the direction of freedom and democracy or with a hangman known as the butcher of the Iranian people. A leader who should be investigated for crimes against humanity.

Transcript of video message sent to the participant of Free Iran gathering by Stanislav Polčák:

From the European Parliament in Brussels, I welcome all participants and guests who join the three-day World Summit of Free Iran.

This gathering is being held at one of the most critical times for the Iranian people. They said ‘no’ to the rigged elections because in Iran elections are neither free nor fair under such a regime.

They do not legitimize the regime. And now with Raisi who was installed as president, the world must choose which side they want to be on, the side of freedom and democracy or the side of an executioner! He is known in all media and for the Iranian people as the ‘butcher of the Iranian people’ and, as Amnesty International has said, ‘he should be prosecuted for crimes against humanity.

I have been supporting your movement for many years. I want to point out that we will not be intimidated by the regime’s unsuccessful ‘lying’ campaigns against Iran’s democratic opposition. We are human beings with principles and our support for the National Council of Resistance of Iran is real and genuine.

So the message is clear. The European Union must recognize Ms. Rajavi‘s ten-point plan for a free Iran, and the only way to do that is to stand by the Iranian people and the organized resistance led by Ms. Rajavi.

Thank you and we will meet in a free Iran very soon!