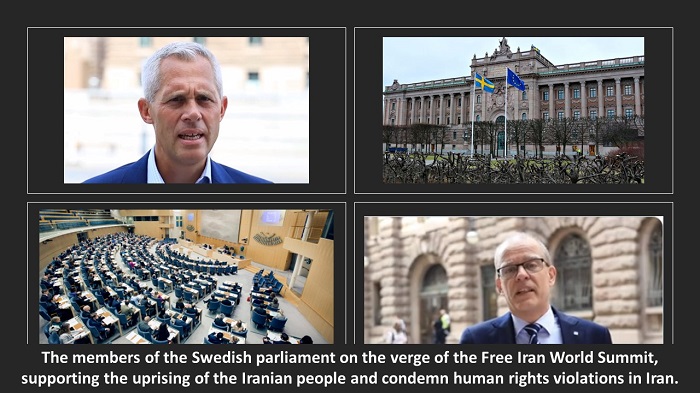 The National Council of Resistance of Iran (NCRI), and the People’s Mujahedin of Iran (PMOI / MEK Iran) reported that the members of the Swedish parliament on the verge of the Free Iran World Summit, supporting the uprising of the Iranian people and condemn human rights violations in Iran.

Transcript of video message sent to the participant of Free Iran gathering: Distinguished participants of the conference.

I now stand before the Swedish Parliament and I am one of the 349 members and a member of the Christian Democrats.

With your activities, you remind us of the special situation in Iran. My party and I have a clear view that change is needed in Iran.

Democracy and freedom make it possible to live in a free society based on human rights, as defined in the Charter of the United Nations. For this reason, in my opinion, the ruling regime does not represent the Iranian people.

We are still witnessing the suppression of human rights in Iran. These include the execution of children. Coronavirus epidemic management in Iran shows that there are many shortcomings and defects. The regime first denied the spread of the virus, then carried out inadequate preventive measures, and later prevented the vaccine from reaching the people. As a result, several hundred thousand people in Iran died due to the spread of the virus.

With the current leadership of Iran, the international community should not treat or deal with this government as a democratic government. This regime must be pressured, including the imposition of sanctions. The Iranian democratic forces that want democratic change must be supported in various ways.

I would like to express my appreciation for your efforts to change the situation in Iran. In Iran where everyone, men and women, can freely decide for their lives and can elect their representatives in a democratic and freeway and without any restrictions.

In conclusion, let me say that let us make sure that each of us can help bring about a democratic change in Iran in which everyone enjoys human rights and equality, which is the right of all human beings. Thank you

Transcript of video message sent to the participant of Free Iran gathering:

I am Shel Arne Ottosson, member of the Swedish Parliament for the Christian Democrats. I wanted to take this opportunity to extend my warm greetings to all those who work for freedom and human rights in Iran around the world.

Yesterday in the Swedish Parliament we voted no confidence in our government. Many may see it as a political crisis and turmoil, but in many parts of the world, people are sacrificing their lives for the sake of the situation we enjoy. This is part of democracy. This is not a crisis or political turmoil. Democracy is one of the foundations of our lives and our social well-being. In a democracy, such an issue does not turn into a crisis and chaos.

One of the pillars of democracy is human rights and their scope. Democracy is characterized by freedom of expression, freedom of the press, and freedom of association. Unfortunately, we see that the ruling regime in Iran systematically violates and suppresses all the above-mentioned rights and freedoms.

With regard to freedom of expression, the Iranian regime suppresses its opponents who have taken to the streets to protest. These are ordinary people who are oppressed.

We who live in the free part of the world must stand more for the Iranian people than before. Especially after the regime elected a murderer as president.

We must stand by the people of Iran without any hesitation and support their demands, which is your wish.

We must not hesitate in condemning the regime and imposing sanctions, and show that we do not tolerate the regime’s abuse and suppress the Iranian people.

I hope we will see a democratic and free Iran soon. I also wish that you, who are working for this goal, get the necessary support to continue your struggle until you reach your destination and achieve your goal. Good luck