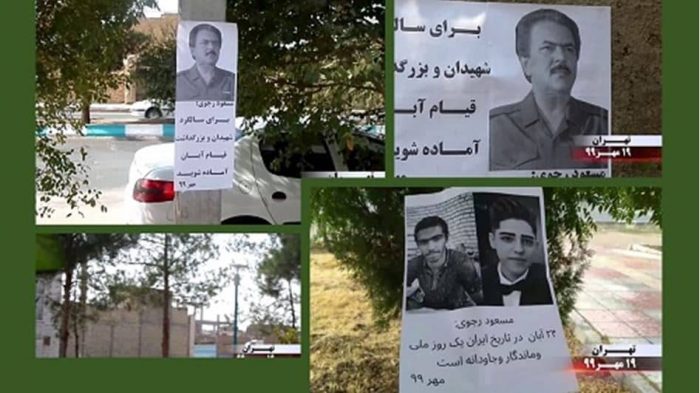 The anniversary of Iran’s largest protests since the Iranian revolution of 1979 is fast approaching. In November 2019, protests erupted across Iran with tens of thousands of people reacting initially to an unexpected rise in the gasoline price, but which quickly became an opportunity to call for regime change.

For many years, the people of Iran have despised the mullahs that rule their country. They have watched the regime suppress their rights and plunder their nation’s wealth. https://t.co/gf85AU09Qb #Iran #MEK #IRGCTerrorWithoutBorders #Iranian #coronavirus @USAdarFarsi pic.twitter.com/kgVCkzR3uX

The reaction from the regime was swift. The order was to kill as many unarmed protesters as possible, often from point-blank range, while at the same time the Internet connection was cut off, making it hard for anyone outside Iran to see what was happening at first hand.

Activist members of The National Council of Resistance of Iran’s (NCRI), and the People’s Mojahedin Organization of Iran (PMOI / MEK Iran).

Around 1,500 protesters were shot dead by regime forces, principally by the Basij arm of the IRGC. Many more were injured and/or arrested, reported by (PMOI / MEK Iran). Reuters confirmed in a special report on December 23, 2019, about the deadly crackdown on November nationwide protests in Iran the death toll of 1500 that was announced by the People’s Mojahedin Organization of Iran (PMOI / MEK Iran) on December 15, 2019.

Protests also broke out in January 2020 after a Ukrainian commercial airplane was shot down by the IRGC as it was leaving Tehran airport.

Before the November 2019 uprising, there had been smaller yet significant protests in Iran, each of which involved influence from the (PMOI /MEK Iran). The role of the MEK was acknowledged by Supreme Leader, Ali Khamenei, who claimed that the 2018 protests had been planned by the MEK for several months in advance.

The regime had been trying to downplay the influence of the MEK for years and it obviously worried them that the MEK was now a serious threat to their power. Khamenei urged newly graduating Basij militia students to watch out for the MEK’s influence at university not long after the November 2019 protests.

The desire of the Iranian people for regime change has persisted despite the brutal repression meted out whenever there is any sign of dissent. Arrests and executions have continued this year, despite the Covid-19 pandemic sweeping the country. The regime is far more worried about losing its control over the country than trying to suppress the virus. The execution of such a popular figure as Navid Afkari, Iran’s champion wrestler, despite international outcry, is a case in point.

#NavidAfkari’s execution, touched world news and now David Jones is asking for the UK government to be more forceful in condemning its approach to the repressive tactics used currently by the #Iranian regime to control its citizens.https://t.co/sPQMnp4ciL

The regime in Iran has a dubious world record for the number of citizens sentenced to death and the number of executions. The regime thinks that this repression can help keep them in power, but the real outcome is that it has alienated the bulk of the population against them. The result is that Iran today is a cauldron of dissent, with the lid of repression only just keeping the bubbling pot from exploding in the regime’s face.

It is unfortunate that European governments have taken a line of appeasement to the Iranian regime, in the mistaken quest to keep the regime to the 2015 nuclear deal. The Europeans think that if they push too hard against the regime that it will jeopardize the nuclear deal.

More persuasive foreign officials have voiced their support for the ideals espoused by the main Iranian opposition movement, the National Council of Resistance of Iran (NCRI), led by Mrs. Maryam Rajavi, an umbrella coalition of opposition organizations, especially the MEK with its links to its own activists in Iran.

#MaryamRajavi Suppression at home and export of terrorism and war abroad are the two pillars for the clerical regime’s survival – Message to the conference at the UK House of Commons, “Iranian regime’s terrorism poses threat to global security” #Iran #MEK pic.twitter.com/QZpItr9LRs

Many speakers have contributed to the criticism of the regime at conferences that have been organized online by the NCRI this year. To take one example, British MP, Bob Blackman, said at one of the conferences that: “we must end the appeasement policy and the illusion that moderates will emerge from the theocratic dictatorship,”

.@iran_policy Washington, DC | Summit to Support a #FreeIran2020
Bob Blackman, MP, the UK Member of House of Commons says more than 2000 MPs have supported the resolution against the mullahs' regime of #Iran & now time to hold the regime accountablehttps://t.co/Tv1GjT8Wxm

Another foreign dignitary, Irish Senator Gerry Horkan, said: “Iran is on the verge of a revolution. We must preempt any form of the criminal and violent reaction by the regime.”

The Iranian regime appears to be running scared because of the recognition that it is now living on borrowed time. There is only so much physical violence against a population that can be accepted before the violence is turned back on the regime itself in a popular revolution. The NCRI and its constituent groups are calling for the overthrow of the mullahs and their replacement by a free and democratic, secular Iran.

Irish Senator Gerry Horkan: Based on the experience of the last four decades, we know that appeasement toward the regime has been far from effective. The regime’s terrorism in the Middle East and other parts of the world have only become worse.#MEK #Iran pic.twitter.com/0xBvdDQlq4