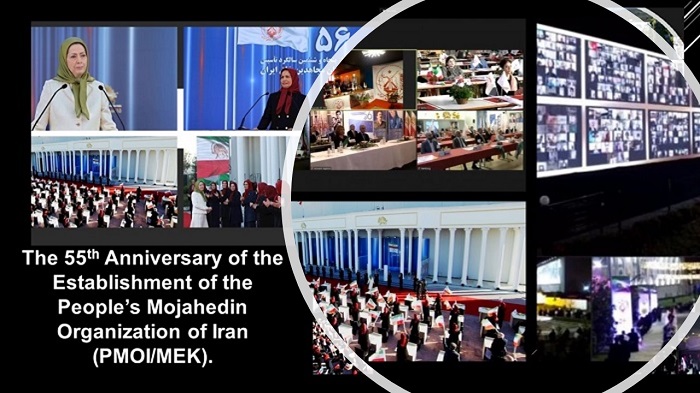 An online conference, organized to celebrate the 56th anniversary of the founding of the People’s Mojahedin Organization of Iran (PMOI / MEK Iran), put the spotlight on the continued harsh use of repression by the Iranian regime in an attempt to keep the lid on what is simmering dissatisfaction and dissent.

The conference was held on Saturday 5th September and was attended online by thousands of Iranian activists around the world together with other supporters of the main Iranian resistance movement, the National Council of Resistance of Iran (NCRI). The conference was held less than 2 months after the 3-day online event, the “Free Iran Global Summit” was held from the NCRI’s base in Albania.

Members and supporters across the globe joined a massive online event on Saturday, September 5, to celebrate the 55th founding anniversary of the Iranian opposition People’s Mojahedin Organization of Iran (PMOI/MEK).#Iran#MEKhttps://t.co/PNZycdB04B

The MEK has been acknowledged as being the main hope for democratic change in Iran with its thousands of members and supporters, together with a network of resistance units within Iran itself.

Because of its influence, the MEK has been a particular target of repression in Iran, especially during and after the recent uprisings that have shaken the confidence of the mullahs’ regime.

Iranian exiles supporters of the resistance movement who took part in the conference are based all around the world, from Europe to the U.S. and Canada to Australia. The attendees represented a huge variety of different interest groups and backgrounds, from business people to academics, professionals, sportsmen and women, office workers as well as ethnic groups such as Kurds and Baluchis. Exiled Iranian youth were also well represented at the 6-hour long conference.

Zahra Merrikhi, the Secretary-General of the #MEK: The true families of the martyrs and the prisoners are part of this gathering. All of them in one body, in one soul, and with the same resolve. All of us are fighting for Iran’s freedom. #WeSupportMEK https://t.co/3IrKUFP9nX

The Secretary-General of the MEK, Zahra Merrikhi, said: “owing to MEK sacrifices, today, the MEK is stronger, more solidified and more cohesive than ever before. It has become the beacon of hope for the Iranian people to overthrow the mullahs’ regime and establish freedom in our fettered nation. It is not without reason that the regime’s leaders constantly warn of the expansion of popular support for the MEK and the role played by the MEK’s Resistance Units in organizing the uprising and the anti-government protests.”

The President-elect of the NCRI, Maryam Rajavi, pointed out that “today, Iran is plagued with poverty, repression and the coronavirus pandemic. Socio-economic gaps have never been wider. The suppressive machine does not stop for a moment in protecting the mullahs’ religious fascist regime. The regime’s Judiciary has been handing down a barrage of death sentences.”

Maryam Rajavi at the ceremony for the 56th anniversary of the founding of the People’s Mojahedin Organization of #Iran, accompanied by the PMOI Secretary Generals #FreeIran2020 pic.twitter.com/WLeR2Drf5O

“Iranian society is in an explosive state. Look at the uprisings in November 2019 and January 2020. Those who took to the streets left no doubt that the solution for all problems lies in the overthrow of the mullahs’ religious dictatorship. They are not looking back to the past. They have set their sights on the future.”

Mrs. Rajavi mentioned two harrowing incidents involving well known Iranians who have been tortured and in one case executed, simply for expressing their views of the regime. Iranian wrestling champion, Navid Afkari, has been tortured and has been sentenced to death, while another protester, Mostafa Salehi, has already been executed, leaving his family bereft at their loss.

Reporting by PMOI/MEKIran, September 2, 2020—There is a wave of protests and criticism from inside Iran and across the…

Mere association or membership of the MEK has been a death sentence ever since former Supreme Leader, Ruhollah Khomeini, issued a fatwa on the organization back in 1988. It was not long after that 30,000 mostly MEK members and supporters were arrested, executed, and buried in mass graves in Iran. The perpetrators have never been brought to justice, even though some who took part in the death commissions now occupy important positions of influence in the current regime.

Harsh repression of protesters and those who are dissatisfied with the regime who are again being associated with the MEK, repeats a familiar pattern that the regime has shown throughout its bloody tenure. 1,500 people were killed by regime forces alone during the recent November 2019 riots.

Warnings were made at the online conference of further unrest in Iran. It is highly likely that fear of reprisals will be insufficient to stem the tidal wave of dissent and protest that will soon sweep Iran. Even state-run media within Iran are warning that the regime is heading in the wrong direction and accumulated missteps have enraged the Iranian people.

Conference participants have urged international authorities to put pressure on Iran to halt the arrests and executions of political prisoners like Navid Afkari. The attendees expressed confidence that the regime would soon be forced out of power by a popular mass uprising.