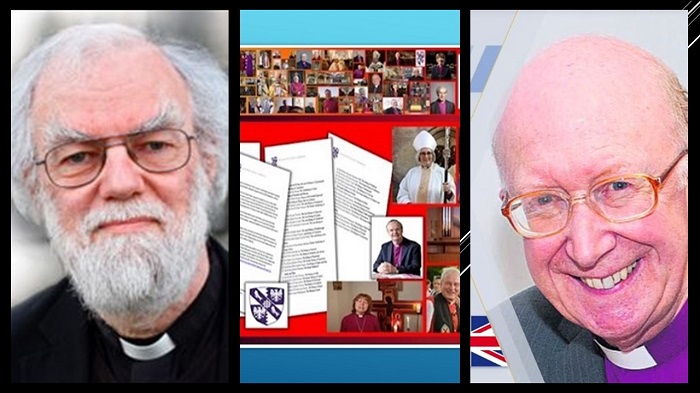 Transcript of remarks by John Prichard, Bishop of the Church of England a long-time supporter of the Iranian Resistance, The National Council of Resistance of Iran (NCRI), and The People’s Mojahedin Organization of Iran (PMOI / MEK), on July 17, 2020, addressing the Free Iran Rally 2020 Free Iran Global Summit.

I’m very grateful for the opportunity to join this very significant online summit again.  Well, not again.  We haven’t been online before.  It’s a remarkable achievement, so well done to everybody.

I have a particular take on the struggle we’re involved in.  And I want to take the opportunity to highlight a recent statement that was supported by Dr. Rowan Williams, the former Archbishop of Canterbury, and supported by 40 British Bishops of whom I’m one, expressing really deep concern about the deteriorating human rights situation and the persecution of religious minorities in Iran.

At the end of June, the Islamic Revolutionary Guard conducted a coordinated operation in Tehran and two other cities, aimed at disrupting the country’s House Church movement.  And sweeping up members of the Iranian Christian community.

And I think those arrests could be an early example of Tehran’s implementation of new laws that have been highlighted by supporters of Iranian Christians and other religious groups because this law was passed in May, and it broadens the judiciary’s authority, making it easier to prosecute a group of people on arbitrary charges like working to undermine national security or committing to enmity with God and other ridiculous things.

And all of these are punishable with harsh prison sentences and possibly even execution.  So in a statement for the United Nations, Universal Periodic Review this year, the United Kingdom government referred to the popular protests in Iran, the one’s last year in particular as they got going again, and said, I quote, “In November last year, we saw the most deadly crackdown against its citizens for decades.  While persecution and discrimination towards religious minorities continue unabated.”

So, as my bishop colleagues and I put it in the statement that we make, the 40 of us, resonating with so much of what we’ve heard from many speakers today, we do applaud the UK government’s decision to classify Iran as a human rights priority country.

the regime has continued its arrests of dissidents, students, and other human rights activists inside Iran, especially targeting the supporters of the #Iranian Resistance #NCRI and the #PMOI #MEK. https://t.co/GViKseJSGT #FreeIran2020 @USAdarFarsi

And to commit to holding it to account for its human rights abuses.  And so, we now call on the UK government and the Foreign Commonwealth Office to do more at the United Nations and internationally, wherever they can.  In order to turn this commitment that they say they’re making into concrete actions that end the impunity that the perpetrators of serious human rights violations enjoy in Iran.

So that’s our strong hope, and it’s a challenge we put to all governments dealing with this Iranian regime.  Meanwhile, the struggle goes on.

God bless you and thank you.