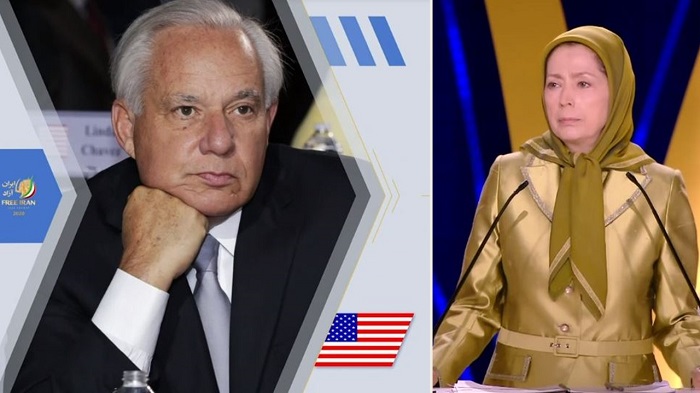 Transcript of remarks by Senator Robert Torricelli at worldwide internet conference focusing on the mullahs’ support for terrorism and shutting down its embassies- July 20, 2020.Thank you so much for having me. And after being, Mrs. Rajavi, in your home so many times, and the people of Ashraf having taken me in your home so, so many times, it’s an honor to welcome you here even if only electronically for the moment to my home in New Jersey.

Friday was an extraordinary event as tens of thousands of people around the world gathered online for a conference on the future of Iran. The reaction from Tehran told us all we really needed to know. The vitriol against The People’s Mojahedin Organization of Iran (PMOI /MEK Iran), Maryam Rajavi in particular, all the rest of us and all of you, is the evidence we needed that we are on track, that the MEK is on their minds and a growing looming threat to the regime. To me, it was a confirmation of everything that we’ve been fighting for and evidence that this final chapter, the freeing of Iran, is at hand.

At the #March4RegimeChangeByIranians @bobtorricelli: To our friends in Europe & UN: If Iran were a nation in Europe, you wouldn't tolerate the mullahs for a minute because of their executions, the torture & death. Do the ppl of Iran deserve less because they don’t live in Europe? pic.twitter.com/00ZUSFb3OP

Today, we are reminded of how difficult that road has been. Not simply for the tens of thousands of martyrs who have lost their lives in Tehran, but what might have been if the terrorist plots of Tehran had come to pass. First, to the people at Ashraf, whose New Year’s attempt at bombing would have taken your lives, Maryam Rajavi’s (Mrs. Maryam Rajavi is the President-elect of the National Council of Resistance of Iran’s (NCRI)), my friend Rudy Giuliani’s, and a host of others, but for the leadership, the courage, and the skill of the Albanian government. A government and a people to which every Iranian, indeed all free people, will always, always be grateful for the role they have played in these many years and continue to play.

But look at the history of these years. If not just the attack that would have happened on Ashraf, the attack in Paris.

Today in @presscenterorg in Brussels the NCRI revealed the findings of its investigation into the structure of the #Iran regime’s Intelligence Ministry in Europe and the key commanders of the plot to bomb the #FreeIran2018 convention in Paris. #ExpelIranDiplomatTerrorists pic.twitter.com/RTHlElQx6h

My country has responded by putting the Quds Force on a terrorist list, and the individuals involved and took decisive action against its leader, Soleimani. It is time that other nations consider their own positions. How can the governments of Western Europe not take similar actions knowing that an attempt was made on the lives of their highest-ranking officials and a peaceful democratic assembly in the heart of France? This pattern continues and nothing is going to change. The murder of hundreds of people in Argentina in an anti-Semitic attack organized in the embassy. These embassies are no longer diplomatic outposts. As the embassy in Austria was used, presumably Belgium and Germany, likely France, certainly Tirana, certainly Buenos Aires, they are outposts for organizing and covering terrorist activity. We also know that many have been used for covers for the creation and operations of businesses to steal or buy nuclear technology. Right under our noses.

Qassem Soleimani, the dead commander of the Iranian regime’s IRGC Quds Force, personally oversaw the transport of “seven tons of banned cargo” to Syria back in 2013, according to the memoirs of a Mahan Air pilot.#Iranhttps://t.co/YgldNR5U3h

It is extraordinary that the skill of the Austrian and German police and of course the Albanian police prevented the loss of so many lives. It is unlikely all these attacks will be prevented, as they were not in Buenos Aires, as they were not in Saudi Arabia. More lives will be lost. Do these governments really want the responsibility, legally or morally, that embassies in their countries were used to organize attacks to take the lives of their own people? It is time to close the embassies, close the consulates, put the Quds Force on a terrorist list, and pursue legal proceedings against those who would lead it and take these lives.

.@SecPompeo: Our pressure campaign is designed to induce Iran to act like a normal country. I urged our #G7 partners to go further in joining us – and they should especially stand with the U.S. in ensuring that Iran never obtain a nuclear weapon. pic.twitter.com/YtHWqSXotP

And finally, a word to our friends in journalism. We all respect mightily what you do and we know how hard it is. A free press is vital to the maintenance of all of our free (governments). But you must come to understand that all governments with which you are communicating when you research stories are not London or Berlin or Paris or Washington. The rules are different. There are across the globe a shadow of public relations firms, operatives, and companies that are disseminating false information.

Only yesterday, one of the most respected journalists in America, Jake Tapper of CNN, wrote a report, published a tweet, and later withdrew it after receiving false information from a regime operative. This is happening every day. The humiliation of Der Spiegel, one of the world’s great publications, citing information patently false, directly from Tehran, and having to have been ordered by a German court to remove it. And I’m embarrassed to tell you the same would have happened with the New York Times, but for the fact that our laws and constitution are different and the courts cannot as readily undertake such action.

Another example of how the New York Times @nytimes sides with our adversaries rather than support American policies against tyrant regimes. https://t.co/IEsTU0SALl

We are not suggesting what you write or how or who you deal with. It is not our concern. Only that you recognize without naivete who you are dealing with. These regimes will use means to manipulate you and get false stories in print. It is happening again and again. Not simply to the embarrassment of Der Spiegel or the New York Times, their own humiliations, that’s not the price. The price is that it prevents the proper international coalition of individuals, gathering of thoughts, the building of momentum, pressure on the regime. In the end, it means lives. It means lost time in the freedom of the Iranian people. Please, please exercise the highest standards and real caution.

It seems the media has distorted facts about #MEK, the main opposition group to the current #Iran regime, as revealed in the Feb 16th @nytimes article by Patrick Kingsleyhttps://t.co/q3O6ubFc71#FakeNews pic.twitter.com/aUFv9uN7XV

"Whether you've joined a cell to coordinate demonstrations in Iran, or you're painting on the side of a building or hanging a banner, no contribution is too small," said Senator Robert Torricelli to the Iranian people.#FreeIran2020https://t.co/DXdp4bABtD

All that I can tell you as you hear my words today, if you’re a prison guard, if you’re a judge, if you’re a lawyer, if you’re running a security force in Tehran, think carefully about those who once took your place in Baghdad or Berlin or Moscow. Think about the accountability of history even to the jungles of Cambodia. The long arm of justice reaches far and the memory is very, very long. And most of us will not rest in this life until it reaches you.

Meeting with the President of Albanian, Ilir Meta at Ashraf 3 #Iran #FreeIranhttps://t.co/eXtXRRpYYz pic.twitter.com/D6hyM5M6J6

To the Albanian people and your government, God bless you. We’ll be grateful to you every day. To the law enforcement officials in Germany and Austria and Albania and a host of other countries that have thwarted these terrorist acts, thank you from the bottom of our hearts. To those of you who are administering the great governments and the extraordinary nations of Western Europe, think again about your position. Your history is too great, your culture too strong, your commitment to the law too profound to allow embassies that hide terrorists and take lives and subvert your free press be allowed to operate in these great capitals. Think again about your position. Mrs. Rajavi, to all of you around the globe, thank you. Hazer, hazer, hazer.