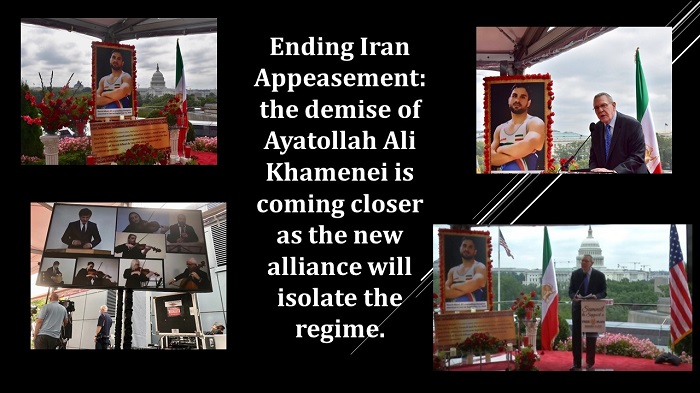 According to Penny Starr, writing for the Breitbart News, who spoke to Jack Keane, a retired 4 star general and former vice chief of the U.S. Army in a recent interview, that President Donald Trump is at the point of bringing to an end the 40 years of U.S. appeasement of the Iranian dictatorship.

Keane stated that as well as enforcing sanctions and ending the 2015 Iran nuclear deal, Trump’s intention to help restore diplomatic ties between Israel and the United Arab Emirates is likely to bring about considerable change. Keane mentioned that this action will probably bring about a shift against the mullahs in Iran as a political, economic, and military alliance with the countries in the Middle East will lead to confronting Iran.

Keane reminds us that “Democrat and Republican presidents, liberal and conservative, as part of that — have all appeased this regime,” but “This president is ending that.” Keane suggested that the demise of Ayatollah Ali Khamenei is coming closer as the new alliance will isolate the regime. He also noticed that the regime is already worried about its potential demise.

Keane’s interview with Breitbart News in Washington, DC, followed his participation in an ‘’international summit of the Iranian diaspora” last week where people from 10,000 locations, including within Iran and from Albania, where can be found the headquarters of the People’s Mujahedin of Iran (MEK) which is clearly linked with Iran’s key dissident movement, the National Council of Resistance of Iran (NCRI).

.@Gen_JackKeane: We in the US are inspired by Iran people’s raw courage and by Maryam Rajavi’s leadership, and what she will achieve as president of Iran.#FreeIran2020 https://t.co/HD58PZ9dWq

Within sight of the U.S. Capitol, Iranian Americans assembled to push for a “free, democratic, and secular Iran.” Close to the assembly was a portrait of Navid Afkari, the Iranian wrestler who was executed a few days ago for simply participating in 2018 protests against the theocratic regime. Around Afkari’s portrait were dozens of roses and red flowers which symbolize the Iranian resistance.

Maryam Rajavi president-elect of the National Council of Resistance of Iran said in her keynote address that “today, Navid Afkari lives on in the hearts and struggle of thousands of Resistance Units in Iran who will continue to resist and rise up for freedom and justice.”

This event was put on Sunday deliberately to coincide with the beginning of the U.N. General Assembly. Members of Congress spoke via video at the summit.

The summit, at the same time, reiterates its call “for justice of 30,000 political prisoners massacred in Iran, primarily activists of the People’s Mojahedin Organization of Iran (PMOI / MEK Iran) murdered in 1988” and “an end to the impunity of the regime’s leaders who oversaw the massacre” and to “urge the world to hold them accountable.”