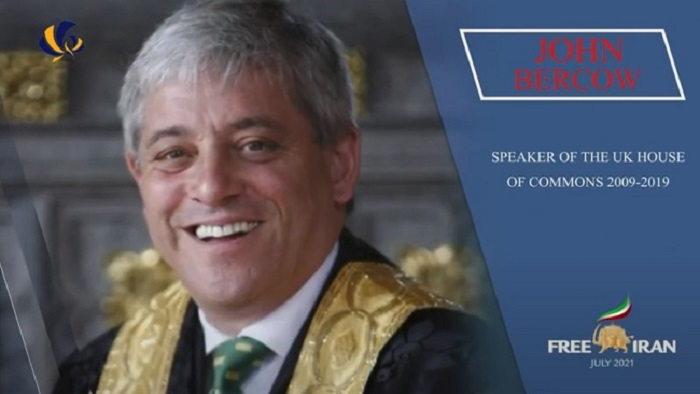 On July 10, John Bercow, Speaker of the House of Commons of the UK (2009–2019) spoke at the Free Iran World Summit in support for the people of Iran in the continuing quest and struggle for freedom, democracy, and human rights.

The three-day event commenced with the participation of Iranians and supporters of the resistance from more than 50,000 locations in 105 countries. The presence of thousands members of the People’s Mujahedin of Iran (PMOI / MEK Iran), at Ashraf 3 in Albania was led by president-elect Maryam Rajavi who was the key speaker. From Sydney to Hawaii, participants gathered online with a 20-hour time difference.

“What we want surely, what the Iranians want, what the world wants is peaceful coexistence, regional and international cooperation. References have already been made to the 1988 massacre, and that cannot be forgotten or forgiven or shoved under the carpet.”

In March 2019, the Iranian Supreme Leader, Ali Khamenei, appointed Raisi as Chief of Judiciary. Since then, Raisi’s history of executing democratic activists has proceeded with more revenge. Raisi supervised 251 people’s executions, in 2020, and in 2021 there were 267 people and the number keeps growing.

As deputy prosecutor of Tehran, Raisi was one of four people who, in 1988, was named by the Supreme Leader Khomeini to carry out his infamous fatwa to massacre imprisoned activists affiliated with the main democratic opposition.

Investigation for crimes against humanity

As a result, thirty thousand political prisoners, mostly members of the MEK, were summarily executed in a couple of months during the massacre, “What is required is the Amnesties call to be honored that there should be an investigation of Ebrahim Raisi for crimes against humanity.

That man has much for which to answer and he is the very embodiment of the bloodthirsty tyrant.” he continued.

Hardliners and reformists is a total and unmitigated sham

“I am clear and I want you to know that I think Democrats around the world are clear that this distinction between hardliners and reformists is a total and unmitigated sham… It is a devious device to convey the impression that there is hope for a prospect of moderate leadership, which within the context of this fundamentalist regime is not possible.” Bercow remarked, destroying the illusion of democracy within the fundamentalist regime.

After the June 18 elections concluded, Khamenei’s worst fear came true when millions of Iranians rejected his regime’s manipulated election. Khamenei was well aware that the electoral charade would be boycotted. So, he pulled Ebrahim Raisi out of the ballot box, because he wanted to address Iran’s restive people and the organized Resistance Movement.

The election was totally corrupt

“We are clear that that recent election was totally corrupt, it was meaningless, as an expression of the public will.” Bercow continued, acknowledging the widespread boycott. “The regime has been shamed by it, a turnout of below 10%. And deep down, the regime knows that they are under pressure, they have been sussed, found out, exposed for the lies that they persist in telling.”

“Your message has been heard. It is understood, you have enormous support across the democratic world, for the clarity, the moral principle, and the unswerving conviction of your position, which is to say no to dictatorship, no to the Shah, no to theocracy, but yes to democracy.” Bercow concluded, supporting Rajavi’s speech of Iranian freedom.