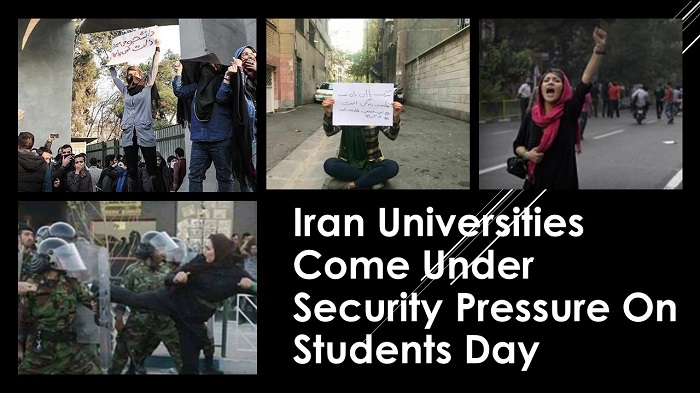 Student Day in Iran is the 6th of December and marks the day that 3 Tehran University students were murdered by police way back in 1953. They were freedom fighters and since that time every Iranian university uses the word “university” to mean bastion of freedom.

Since 1953, Iranians who have been university educated have led the struggle for freedom and democracy. Despite the regime actively marginalizing women and trying to deny them an education, this hasn’t stopped them. Today, 50% of university admissions at the beginning of each year are young women.  Going hand in hand with this success has been their support for anti-government protests and in particular their demand for democratic rights.

Are you aware of the heavy prison sentences brave female students in Iran are facing? #ArbitraryArrests of students have continued over the past year, and yet the regime has not been held accountable. https://t.co/94xfCRgfgZ pic.twitter.com/yLvurLZrFF

At the nationwide uprisings from December 2017 to November 2019, students were always present in large numbers, and in particular, they were women. One of their slogans is “Reformers, Hardliners, the game is over.”

Last year, despite heightened security due to the crackdown after the November 2019 protests when 1,500 peaceful protesters lost their lives, Reuters confirmed in a special report on December 23, 2019, about the deadly crackdown on November nationwide protests in Iran the death toll of 1500 that was announced by the People’s Mojahedin Organization of Iran (PMOI / MEK Iran) on December 15, 2019.

Predictably, the mullahs’ regime sent police to Tehran University and the surrounding area to try to quell the resistance movement and instill fear in the students. This didn’t stop them and Student Day commemorations took place, not just at Tehran University, but also at the universities in Babol, Tabriz, Ahvaz, Mashhad, Isfahan, and Najafabad. There was no shortage of women attending these rallies.

The students repeated several slogans such as:

On January 8th, 2020, the Islamic Revolutionary Guard Corps’ (IRGC) anti-aircraft missiles shot down a Ukrainian passenger airline, killing all 176 passengers. 28 of the victims were holders of advanced academic degrees.

This caused anger amongst the people and demonstrations took place throughout the country including:

Thousands of students, including many women, protested together and chanted “death to the dictator.” However, the regime’s repressive forces attacked the demonstrators with batons, tear gas, and guns. They even brought vehicles that were equipped with automatic machine guns and water cannons to attack the street protesters. This was terrible for those who were just fighting for freedom and democracy for all Iranians.

Following these protests, students turned victims’ funerals into anti-government protests throughout many parts of Ira including Sanandaj, Shiraz, and Isfahan.

Several protesters were injured, and plenty was arrested. Many videos of female students being injured when protesting in Tehran’s Azadi Square have now appeared on social media.

Treasuring (December 6), the #StudentDay in #Iran, which epitomizes the Iranian student’s cry for freedom &their protests against the dictatorships of the Shah &the mullahs. We also cherish the memory of Dr. Maleki, the freedom-loving former president of Tehran University. pic.twitter.com/DBdyM1889Y

Mrs. Maryam Rajavi the President-elect of the National Council of Resistance of Iran’s (NCRI): Treasuring (December 6), the Student Day in Iran, which epitomizes the Iranian student’s cry for freedom and their protests against the dictatorships of the Shah and the mullahs. We also cherish the memory of Dr. Maleki, the freedom-loving former president of Tehran University.

Condolences on the demise of Dr. #MohammadMaleki, Tehran Univ. 1st Chancellor post-anti-monarchic revolution in 1979. He was under pressure & torture in prison for years for opposing the ruling theocracy. Following his release, he also endured pressures & restrictions. #Iran pic.twitter.com/pfz2LWlxHJ

An abridged version of an article written for NCRI Women.