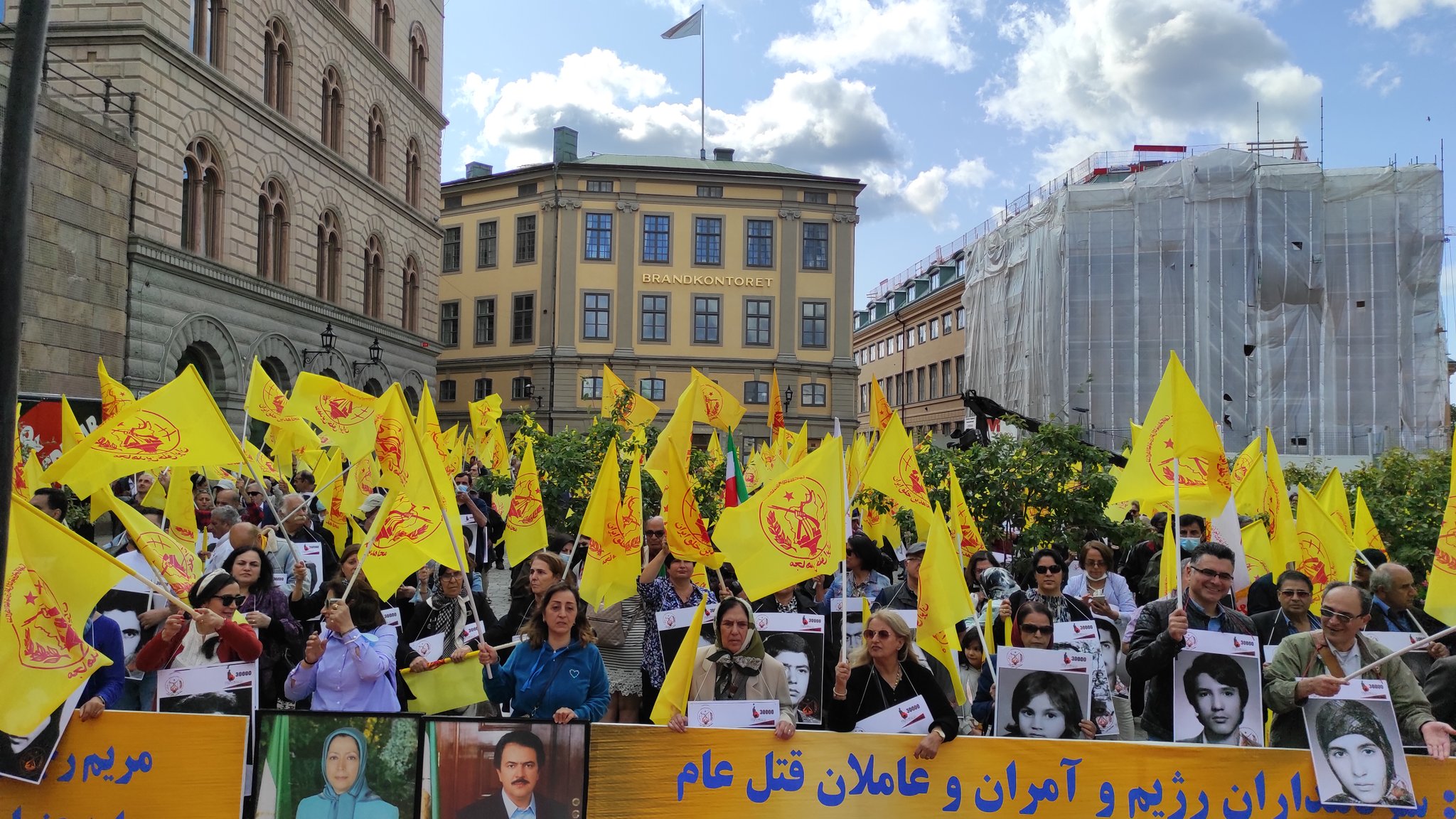 The National Council of Resistance of Iran (NCRI), and the People’s Mujahedin of Iran (PMOI / MEK Iran), reported that the MEK supporters protest in Stockholm on the 33rd anniversary of the 1988 massacre of political prisoners in Iran.

Monday afternoon, August 23, 2021, on the 33rd anniversary of the 1988 massacre of political prisoners in Iran, Iranians, and supporters of the MEK held a rally in Stockholm.

The Iranian demanded that the leaders of the mullahs’ regime be tried for genocide and crimes against humanity.

30,000 political prisoners were executed in the summer of 1988 based on Khomeini’s fatwa, more than 90% of whom were members and supporters of the Mujahedin-e Khalq (MEK Iran / PMOI).

The numbers of Swedish parliamentarians from various parties such as Magnus Oscarsson, Alexsandra Anstrell, Hans Eklind, and Kjell Arne Ottosson, addressed the rally.

Other dignitaries including Ingrid Betancourt, the former Colombian presidential candidate, Patrick Kennedy, a former member of the U.S. Congress, and Kimmo Sasi, Former Minister of Transport and Communications of Finland addressed the rally.

In her video message to the rally, Mrs. Maryam Rajavi, the President-elect of the National Council of Resistance of Iran (NCRI), said that the Call-for-Justice Movement, which began in the first weeks of the massacre in 1988, has continued its activities since then, and will advance until the Iranian people’s court or an international tribunal prosecutes the clerical regime’s leaders for committing genocide and crime against humanity.

Ali Khamenei and his accomplices

Mrs. Rajavi added: Ali Khamenei and his accomplices were directly involved in the hanging of thousands upon thousands of political prisoners in 1988 to preserve their rule.

With the same ruthless brutality, they are killing hundreds of thousands of helpless people today in the inferno of the Coronavirus… Regime leaders and perpetrators of the 1988 massacre must be put on trial and prosecuted by the International Criminal Court or the Iranian People’s Court… This is the right of the Iranian people, the right of humanity, and the right of the People’s Mojahedin of Iran.

The international community to recognize the massacre

We, therefore, urge the international community to recognize the massacre of 30,000 political prisoners in 1988 as genocide and a crime against humanity.

She underscored that appeasing and placating the Iranian regime contradicts European commitments to uphold and stand up for human rights… Western governments must respect the demand of the Iranian people and Resistance and do not accept Raisi, the mass murderer, in their countries or any of the international forums.

Remarks by, Ingrid Betancourt called for the prosecution of the leaders of the clerical regime: “Today the families of the 1988 victims are subject to persistent threats in Iran.

The UN human rights experts have also expressed their alarm on the destruction of the mass graves. The mullahs want to eliminate any evidence of the crimes for which we are seeking justice.

And today the highest position of power in Iran is occupied by a perpetrator of those crimes.”

Congressman Patrick J. Kennedy (1995 –2011), also reiterated the need for the prosecution of the regime leaders, and in particular, Khamenei and Ebrahim Raisi:

“We said after the Holocaust that we shall never see these crimes against humanity again, and yet we have.

The reason is that as an international community we have not stood up and condemned those crimes.”

Remarks by, Kimo Sassi, former Finish Minister,  said, “The 1988 massacre was one of the darkest moments in Iran’s history.

30,000 political prisoners were sentenced and killed and murdered. There are mass graves in 36 cities in Iran and there was no due process.

The massacre was a decision by the supreme leader in Iran, a crime against humanity.”