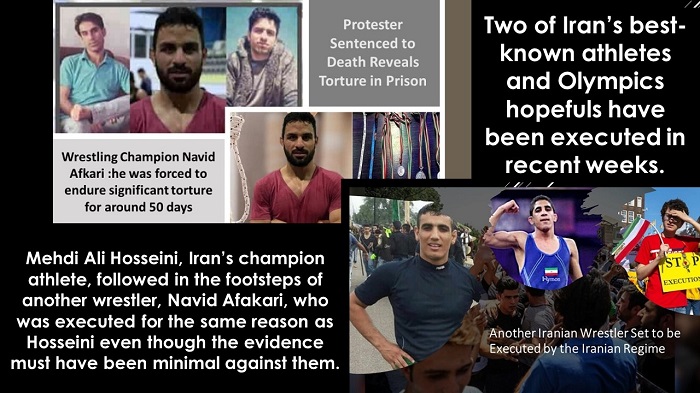 Is history going to repeat itself? On January 27th, people around the world were encouraged to remember the Holocaust, one of the world’s most notorious and heinous acts of genocide. One of the reasons for the Nazi holocaust was a policy of appeasement by western powers against Hitler’s regime. It didn’t work then and cannot work now against the mullahs’ regime despite clear evidence of massive human rights abuses.

In fact, the Iranian regime has the unenviable record of executing more people per head of population than any other. The number of Iranians who are arrested, tried in kangaroo courts, then executed is shocking.

Two of Iran’s best-known athletes and Olympics hopefuls have been executed in recent weeks. Mehdi Ali Hosseini, Iran’s champion athlete, followed in the footsteps of another wrestler, Navid Afakari, who was executed for the same reason as Hosseini even though the evidence must have been minimal against them.

One of the Iranian regime’s greatest crimes against humanity occurred in 1988 when an estimated 30,000 political prisoners were executed many of the victims were either members or supporters of the People’s Mojahedin Organization of Iran (PMOI / MEK Iran). Mostly those taking part in the government were slaughtered or simply died of disease or starvation as Iran’s style of government was liberally touted as being close to the EU.

A well known former lawyer, Geoffrey Robertson QC, called the slaughter inn1988 to be the “worst crime against humanity since World War II.”

There have been mounting calls for those responsible for organizing the massacre to be brought to justice in the Hague.

The main perpetrators of the 1988 massacre now occupy important positions in the regime and have been identified as the Judiciary Chief, Ebrahim Raisi, Alireza Avaei and Mostafa Pourmohammadi. The Iranian regime has continued its policy of destroying or attempting to destroy anyone who criticizes it and this will have been on show in this recent period. 1,500 protesters were gunned down on Iranian city streets after the November 2019 protest.

The abysmal human rights record of the Iranian regime was the subject of a letter signed by a dozen human rights experts in the U.N. This time, no-one took much notice, as the Europeans seem to place far more importance on economic progress in Ian despite listening to comments made for the best part of this decade.

The EU’s chief diplomat, Josep Borrell, has stated the EU’s determination to uphold its new human rights legislation. If the EU is serious, then Iran’s regime should be first in the queue for condemnation and action to bring the regime to account. They can make a start by shutting down Iran’s Embassies across Europe and deporting its diplomats, many of whom are in fact involved up to their necks in pursuing terrorism objectives.