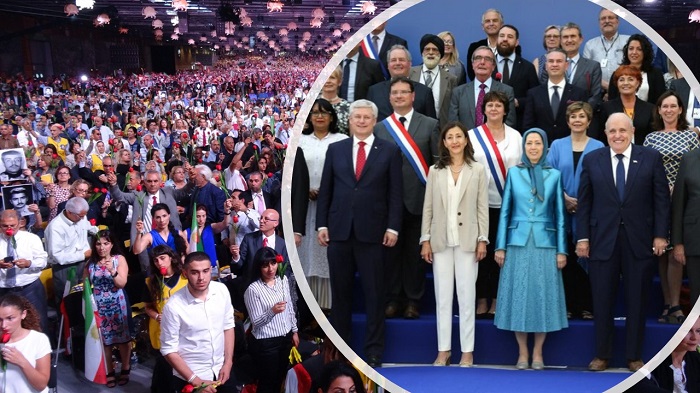 Prosecutors suggest that the diplomat, Assadollah Assadi, was the middleman for Iran’s intelligence services’ aborted 2018 bomb attack of an annual rally attended by 100,000 just outside Paris. The bomb was brought to a Pizza Hut in Luxembourg where it was given to the alleged bombers who were to use it to bomb the rally in France of a key opposition group, the People’s Mojahedin Organization of Iran (PMOI / MEK Iran), and the National Council of Resistance of Iran (NCRI), to the Iranian government. The trial, which has just begun in Antwerp, is of an Iranian diplomat based in Vienna and 3 other Iranians.

The Iranian diplomat was a man called Assadollah Assadi, who was the third secretary at the Iranian Embassy in Vienna. Two of the other accomplices were a Belgian-Iranian couple and there was one other whose identity is yet to be revealed.#MEK Iran #WeStand4FreeIran pic.twitter.com/qRWF3Nv8nF

The prosecutors have accused the Iranian diplomat, Assadollah Assadi, 48, of transporting the bomb to Vienna from Iran packed in his luggage when he boarded an Austrian Airlines flight. He allegedly drove to Luxembourg in a rented car and transferred the bomb to an Iranian-Belgian couple in a Pizza Hut on June 30th, 2018. Amir Saadouni, 40, and his wife, Nassimeh Naami, 36 had both been granted political asylum and later Belgian citizenship. Mr. Assadi was arrested in Germany, where he had no diplomatic immunity, at a service station on his way back to Vienna. Mehrdad Arefani, 57, also of Iranian-Belgian nationality, is accused of being Mr. Assadi’s accomplice. The charge against the 4 is attempting to carry out a terrorist attack. They could be imprisoned for 20 years.

So far when the proceedings started in Antwerp on Friday, Mr. Assadi said he wasn’t going to appear. His lawyer, Dimitri de Beco, announced that Assadi was contesting the charges and considers he has diplomatic immunity.

latest on EU terror trial of the centaury
– Zarif orders Assadollah Assadi to be a 'no show'
– in last min attempt Iranian regime tried to call for execution of dual citizen to cast shadow on court
Question to EU diplomacy what is your response?!#ShutDownIranTerrorEmbassies pic.twitter.com/iF6CeGDd43

The leader of the MEK who was the target of the aborted bombing, Maryam Rajavi, is a well-known figure and has been compared to a cult leader with her husband, Massoud Rajavi, who hasn’t been seen since the 2003 Iraq war and is thought to be no longer alive. Mrs. Rajavi supports a revolution in Iran and says she would be the interim president of a new government.

The 2018 convention was attended by former Mayor Rudolph W. Giuliani of New York; the former House speaker Newt Gingrich; the former F.B.I. director Louis Freeh; former Gov. Bill Richardson of New Mexico; former Prime Minister Stephen Harper of Canada; and the Colombian politician Ingrid Betancourt. In the past, it has been alleged that well-known figures have been paid large sums of money for attending events. The MEK opposed the shah of Iran and was at one point declared a terrorist organization by the European Union until 2009 and by the United States until 2012.

There is no true information available about how Iran’s government operates but the Islamic Revolutionary Guard Corps often appears to operate separately from the government.

This trial coincides with a time when Mr. Zarif and Mr. Rouhani are attempting to restore better relations with the United States following president-elect Joe Biden’s election. However, the bomb plot is not the first time Tehran has tried to eliminate its opposition abroad. Iran has been accused of planning an assassination in Denmark in 2018 that embarrassed the EU when Denmark called for sanctions against Iran.

The trial is expected to last many days, with a court judgment likely in the New Year.

An abridged version of an article written by Jan van der for News Media RFI.