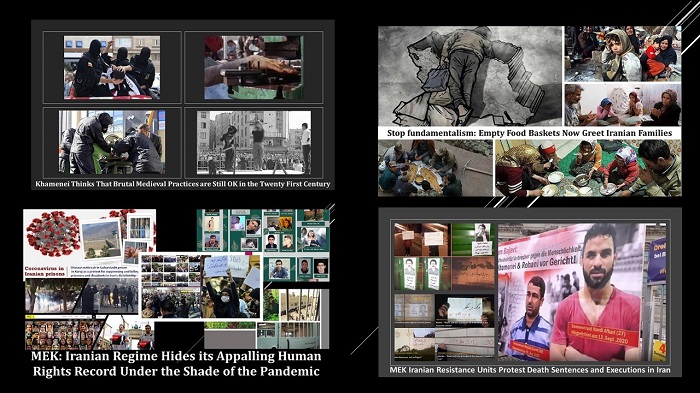 The regime’s State Security Forces in Mashhad attacked a young man using an electric taser and pepper spray which led to his untimely death. A similar incident has reportedly taken place against another young man in the North Khorasan province of northeast Iran. The family of this man has since filed a ‘deadly shooting’ lawsuit, according to a report from the state-run ISNA news agency with the North Khorasan court.

In other countries around the world, movements have emerged condemning violence by government forces, but not in Iran even though it has been quietly taking place out of the public view. The murder of Ms. Asiyeh Panahi in Kermanshah in western Iran is another example of the regime’s brutality which is wholeheartedly supported by Supreme Leader, Ali Khamenei, himself. The regime refers to these agitators as thugs.

An increasing of brutal violence against the public, especially the youth, in an attempt to shore up the mullahs, who are losing public trust and respect as they mismanage the economy and the response to the Covid-19 epidemic. Over 139,400 people have died of the coronavirus in Iran, according to reports by the People’s Mojahedin Organization of Iran (PMOI / MEK Iran).

The question is why does the regime need to be so brutal? There is a clear answer to this question and that is the regime is about to collapse as it is no longer supported by the people, especially young people. But instead of trying to reconcile with the people it is treating any form of destabilization in the country as a threat to its existence and is coming down hard on the perpetrators in the hope that fear will stop them.

The state-run Jahan-e-Sanaat daily published an article with the following message: “Violence is escalating in our society day by day. Bear in mind that in a society in which social dilemma is neglected and somehow relinquished, each case of resentment and division can erupt into an immense crisis.” In other words, because the wealth of the nation has not been shared, the people are suffering and they want a regime change that will help to alleviate their poverty.

Similarly, the Mostaghel daily stated in an article published on October 26th that: “the most important outcomes of economic crises are likely to be followed with social and political effects. Therefore, there is a risk of this spreading insecurity, violence, and clashes. With social peace nosediving, usually being prior to a general peace, there are concerns about widespread public unrests in the near future,”

The SSF is not helping the situation with its brutality but on behalf of the regime, it is using intimidation and fear in a fruitless effort to try to quell dissent, especially the youth supporting the (PMOI / MEK Iran), and joining the MEK resistance unit that mobilizing people to protest against mullahs regime.

The fact of the matter is that whatever the regime or its security forces are doing it is not silencing Iran’s youth or even at this point the general population. All the people in Iran are looking for is getting rid of the present regime for good. The situation in Iran has become so explosive and sooner rather than later there is ultimately going to be a regime change that will benefit all Iranians.

Mrs. Maryam Rajavi the President-elect of the National Council of Resistance of Iran (NCRI), this regime must be expelled from the UN and its leaders brought to justice for their continuing crimes against humanity and the violations of human dignity. The international community must not allow this regime to bring medieval edicts to the 21st-century.

Maryam Rajavi: The Brutal Torture and Murder of a Young Man in #Iran Shows the Viciousness of a Regime That Can Only Rule Thru Execution, Torture, and Repression#HumanRights #NoImpunity4Mullahs
https://t.co/FzttFSfVkS