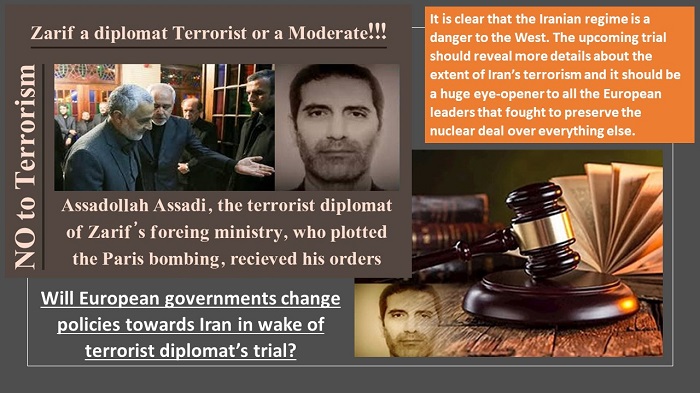 In 2018, an Iranian diplomat posted at the regime’s embassy in Vienna planned a terrorist attack at the National Council of Resistance of Iran’s (NCRI) and the People’s Mojahedin Organization of Iran (PMOI / MEK Iran) annual Free Iran gathering due to take place on 30th June just outside Paris.

Diplomat Assadollah Assadi was arrested in Germany and eventually extradited to Belgium where he and three accomplices will stand trial next week.

Thankfully, the plot was foiled before it could be carried out because the Free Iran gathering was attended by around 100,000 people including hundreds of high-profile politicians, religious figures, lawmakers, and dignitaries from both sides of the Atlantic. It is believed that the main target was Mrs. Maryam Rajavi, the President-elect of the NCRI.

Not content with plotting a terrorist attack, Assadi implied further terror plots during his detainment. He said that armed militant groups in Syria, Lebanon, Yemen, Iraq, and Iran would be keeping an eye on how things evolve with regards to his arrest and subsequent trial to see what side Belgium chooses.

Normally the Iranian regime uses proxies around the world to plot and carries out its terror attacks, but this time it was one of the regime’s agents that personally transported the explosives to those carrying out the job. Assadi could not be further implicated and his threats with regards to regional proxies keeping an eye on the situation only go to prove that there is extensive contact between parties.

Furthermore, intelligence and security officials in Europe have established that most of Iran’s diplomats across Europe are actually intelligence operatives for the Iranian regime. These diplomats receive orders mostly from the regime itself, just like Assadi.

Iranian authorities tried extremely hard to stop the extradition process and put a stop to the trial, but without luck. The fact he is on trial is positive news for the Iranian Resistance, (PMOI / MEK Iran) but it remains to be seen if the regime will be held accountable for its role in the plot that targeted its political opposition.

It is clear that the Iranian regime is a danger to the West. The upcoming trial should reveal more details about the extent of Iran’s terrorism and it should be a huge eye-opener to all the European leaders that fought to preserve the nuclear deal over everything else.

We should see European policies towards Iran change, and perhaps even the Foreign Minister Javad Zarif will be seen for who he really is. The US described him as a “propaganda minister” and limits his movement on American soil. Perhaps the Europeans will follow suit.

Iranian operatives are allowed to move freely around Europe. Many of these have diplomatic status, making it more complicated to hold them accountable. The European embassies are being used by the regime as centers of terrorism – where attacks are plotted and financing and armament are organized. This cannot be ignored for much longer.

The upcoming trial of Assadi and his accomplices is the perfect opportunity for European governments to take action to put an end to the regime’s belligerence on European soil.

#Iran: Next Friday, four #Iranian agents will stand trial in Belgium for a 2018 plot to blow up a gathering of Iranian expatriate activists. The proceedings are very likely to result in a conviction for a high-ranking Iranian diplomat, Assadollah Assadihttps://t.co/PyCCqyfZQ5