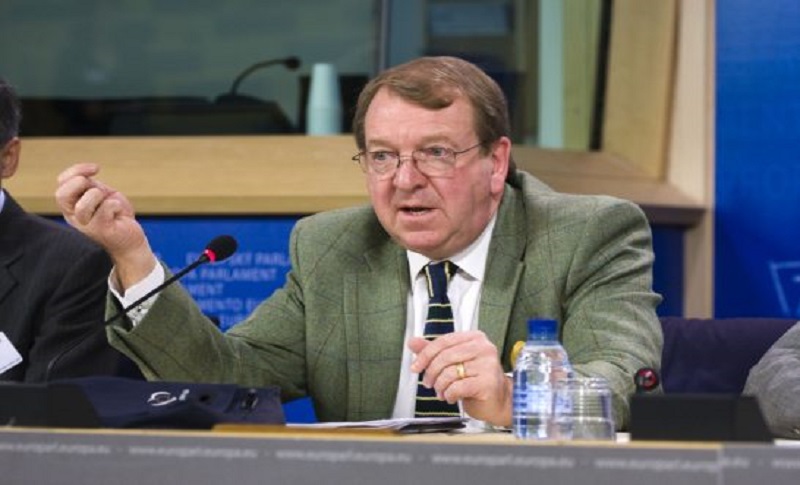 An article published on the National Council of Resistance of Iran’s (NCRI) website written by Struan Stevenson, former member of the European Parliament (1999-2014) and the Coordinator of the Campaign for Iran Change (CIC) on November 14, 2019 explains why the developments in Iraq and Lebanon, the countries where the Iranian regime boasted of controlling their capitals, are becoming very worrying for the regime.

“Long considering the Middle East as its fiefdom the mullahs’ regime regards a decrease in influence in these areas as a prelude to sparking new protests and even a nationwide uprising back home”, said Mrs. Stevenson.

On November 3, 2019, at least three Iraqi protesters have been killed during an attack on the Iranian consulate in the Shia holy city of Karbala and the site was torched.

“This turn of events gained a broader perspective as protesters in the city of Karbala, a major Shi’ite stronghold considered vital for the Ayatollahs in Iran, stormed the Iranian consulate on Sunday night,” continued Stevenson.

Regarding the protest in Lebanon Struan Stevenson wrote:
“In Lebanon, more than a week of demonstrations triggered the resignation of the Lebanese prime minister Saad Hariri. Iran-backed Hezbollah held a number of seats in Hariri’s cabinet, providing even further influence to Iran in Lebanese affairs. His resignation, however, leaves the future in murky waters and Tehran can no longer rely on Obama’s appeasement policy to escalate its influence in Beirut.”

What Protests in #Iraq and Lebanon Mean for #Iran? by Struan Stevenson https://t.co/NKiLnbThNJ#IRGCTerrorists #IRGC_OUT

The Lebanese protesters demand an end to corruption and Iranian influence in their country and chanted slogans against Hezbollah leader Hassan Nasrallah.

The Iranian regime feared the escalation of protests and through Hezbollah, it launched an attack targeting anti-government protesters seen smashing chairs and torching tents in Beirut on October 29th.

Struan Stevenson said that the rising tensions from the hundreds of thousands, if not millions of Lebanese who are sick of Hezbollah and Iranian meddling in their internal affairs, have sent a disturbing signal to Tehran and it has focus on the mullah’s policy of aggressive expansionism in the Middle East.

“The Iranian regime knows that after four decades of deep investment in the region to establish a meaningful influence, demonstrators in Iraq and Lebanon are posing a major threat to Iran’s interests by challenging the political status quo. Groups with any affiliation to the Islamic Republic are under heavy pressure and condemned generally by the people of Iraq and Lebanon. Of even more significance is the fact that the current uprising is rooted in the Shi’ite communities where Iran has long boasted to enjoy vast support” Stevenson mentioned.

The protest in Iraq and Lebanon is a strategic loss for the Iranian regime. While Iran-backed individuals and entities are establishing vast economic powerhouses the people of Iraq and Lebanon live under poverty, unemployment, government corruption and Iran’s malign influence in their countries.

“Hezbollah has established a large swath of influence in southern Lebanon, primarily through cash handouts provided by the Iranian mullahs at the expense of their own people, 80 percent of whom are already struggling with poverty”, Stevenson said.
Iran is desperate to respond and Ali Khamenei and Hassan Rouhani blamed the West for sparking and fueling the current unrest. Khamenei accused “U.S. and western intelligence services, with the financial backing of evil countries” of “fanning the flames of chaos.”

It is very difficult for the mullahs to handle the current situation in Iraq and Lebanon and is attempting to distance itself from the already out of control tensions in both countries.

Struan Stevenson wrote: “There are a new awakening and realization among these Arab nations about the devastating impact of Iran’s belligerence in their countries. And these protests are a sign of regional nations slamming their fists down hard and saying enough is enough. Online videos from Iraq show demonstrators, despite the violent crackdown that has leftover 250 dead and several thousand injured, bravely chanting “Iran out, out! Iraq will remain free.” Demonstrators are also stamping on and vividly insulting images of Khamenei and the IRGC Quds Force chief Qassem Soleimani, who was behind the massacre of peaceful protesters in Karbala, where black-clad and masked Quds Force gunmen killed 18 and injured 865. The Iranian regime’s flag has been burned in several Iraqi cities.”

“At the end of the day, the regime in Iran understands very well that such protests in Iraq and Lebanon can portray a weak Tehran apparatus and a good target for a new round of protests and a nationwide uprising by the Iranian people”, Stevenson concluded.

At home, the mullahs derive their “power” from executing, torturing and suppressing the defenseless population. Abroad, they act with impunity because no one has challenged their warmongering and terrorism. #NoImpunity4Mullahs #HumanRights #Iran pic.twitter.com/H8VqwvgCxy

Struan Stevenson is the current Coordinator of the Campaign for Iran Change (CIC) and was a member of the European Parliament from 1999 to 2014. From 2009 to 2014 he was president of the Delegation for Relations with Iraq of the Parliament. He Chaired the Friends of a Free Iran Intergroup from 2004 to 2014. He is also an international lecturer on the Middle East and president of the European Iraqi Freedom Association (EIFA).