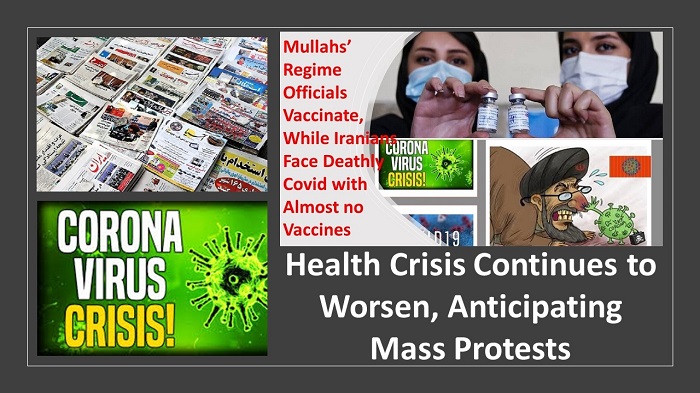 Iran’s state-run media acknowledged the seriousness of Iran’s Covid-19 and economic crises. On September 23, the state-run Jahan-e Sanat daily reported, “We witnessed our huge difference with other countries in terms of controlling the novel coronavirus.”

According to the Iranian opposition group The National Council of Resistance of Iran (NCRI), and the People’s Mujahedin of Iran (PMOI / MEK Iran), 442,100 people had died in Iran as a result of the Covid-19 outbreak as of September 28.

“The ominous Covid-19 entered towards the end of 2019 and continued throughout 2020 and 2021. It showed after decades our governing and management of a crisis in the country to the showcase of competition with other countries,” Jahan-e Sanat remarks.

The virus and it’s mass casualties as a deterrent

The regime purposefully utilized the virus and its mass casualties as a deterrent to the popular protests that began in 2018 and lasted into 2019. People’s antipathy for the regime has grown as a result of its purposeful inaction and reluctance to acquire vaccines.

“Unprecedented death toll over the past two months and a collapsing healthcare system have led people to point the finger at the authorities’ delay in advancing the vaccination program. The magnitude of the crisis was such that some doctors did not fear criticizing the performance of the Ministry of Health,” Jahan-e Sanat wrote.

“Two weeks ago, Ali Tajernia told Sharq daily: ‘It seems that Barakat had presold its vaccine. It seems that the reason for not wanting to buy the vaccine from western countries was that Barakat had received 200,000 Tomans for each dose of the vaccine. If we multiply this by 120 million vaccines, Barkat took over $ 1 billion from the government funds,” the state-run Mardom Salarie daily reported on Thursday.

The Covid-19 crisis exacerbated people’s financial difficulties. “There is no way of knowing how many people have died as a result of the novel coronavirus. When they noticed the 700-800 thousand tomans cost of Remdesivir or the hefty rates one night at the hospital, how many people were forced to forego treatment? Under the strain of unbridled inflation, some people refuse to buy lemon, ginger, or carrot,” wrote the state-run Sepid on September 23.

“No one knows what happened in the slums, marginalized areas, and suburbs during the consent Covid-19 peaks. According to official and unofficial figures, a considerable portion of the population is marginalized. According to statistics, there are between 11 and 25 million slum residents worldwide, with an estimated 7,600,000 living on the borders of cemeteries. During the gloomy days of the coronavirus outbreak, cemeteries devoured corpses incessantly,” Sepid adds.

“Our study shows that from 2000 to 2019, the living cost of Iranian households increased 22 times, and the rise in inflation was the main cause of poverty growth,” Morteza Bakhtiari, president of the Imam Khomeini Relief Committee (another plundering organization), said in August.

“During this time, approximately 33% of Iran’s population fell below the multidimensional poverty line, and while the population living in absolute poverty reached 15% from 2013 to 2015, this ratio has risen to more than 30% from 2015 to 2020.

The poor people live in the country’s villages

The majority of the poor people live in the country’s villages. Sepid said, quoting Bakhtiary, “About 15.5 percent of urban residents live in absolute poverty, and nearly a third of Iran’s rural population lives in absolute poverty.”

The ongoing Covid-19 and economic crisis have intensified societal unrest:

“If the negative consequences from impractical and inefficient decisions continue. In that case, the efficiency and legitimacy of the political system may be challenged,” Aftab-e Yazd daily warned officials on September 15.