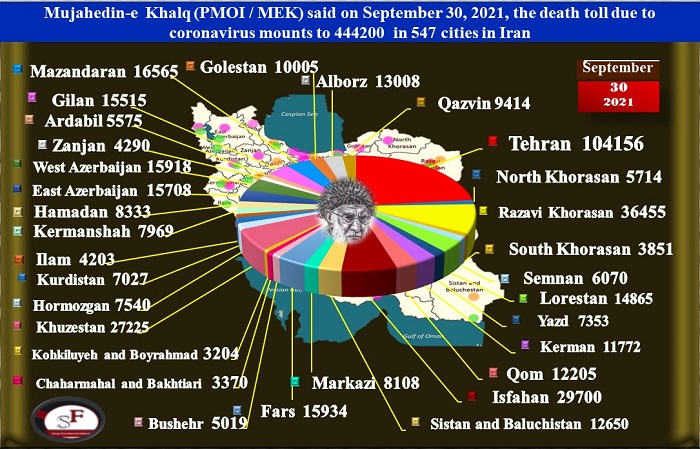 The severity of the Covid-19 and economic crises in Iran has been acknowledged by Iran’s state-run media, according to the Iranian opposition group The National Council of Resistance of Iran (NCRI), and the People’s Mujahedin of Iran (PMOI / MEK Iran).

How Iran is dealing with the coronavirus pandemic

On September 23, the Jahan-e Sanat daily reported that they have seen a significant difference in how Iran is dealing with the coronavirus pandemic as compared to other countries.

“The ominous Covid-19 entered near the end of 2019 and lasted through 2020 and 2021,” they claimed. “It showed after decades our governing and management of a crisis in the country to the showcase of competition with other countries.”

The regime purposefully utilized the Covid-19 outbreak and its mass casualties as a deterrent to the popular protests that began in 2018 and lasted into 2019.

The Iranian people despise the regime for postponing the immunization programme, which has resulted in an ‘unprecedented death toll over the past two months and a failing healthcare system,’ according to Janat-e Sanat. They also admitted that no one believes the regime’s allegations that sanctions are to blame for the pandemic’s difficulties; instead, they blame the regime’s corruption and “economic mismanagement.”

The regime’s supreme leader, Ali Khamenei, barred the import of all renowned international vaccines in January of this year, instead of commanding the manufacturing of homegrown vaccines.

Ali Tajernia stated in an interview with Sharq daily two weeks ago that the business behind the domestic vaccine, Barakat, was receiving 200,000 Tomans every dosage of the vaccine, giving the regime a reason to be hesitant to buy vaccinations from overseas.

State-run Sepid emphasized how the virus is exacerbating Iranian citizens’ economic woes. They claimed that no one knows the true numbers of people who died as a result of the Covid-19 crisis, and they questioned how many people were forced to go without treatment due to the high cost of a hospital stay or because the medication Remdesivir costs between 700 and 800 thousand tomans, a figure that many people simply cannot afford given inflation and poverty.

“No one knows what happened during the Covid-19 consent peaks in slums, marginalized areas, and suburbs,” Sepid stated. According to statistics, there are between 11 and 25 million slum residents worldwide, with an estimated 7,600,000 living on the borders of cemeteries.”

Sepid noted that according to poverty statistics in Iran, 15.5 percent of urban people live in absolute poverty, while at least a third of individuals in rural areas are poor.

The ongoing Covid-19 and economic crisis have heightened societal unrest, causing state-run media to issue a warning to the government in recent days of another mass protest.