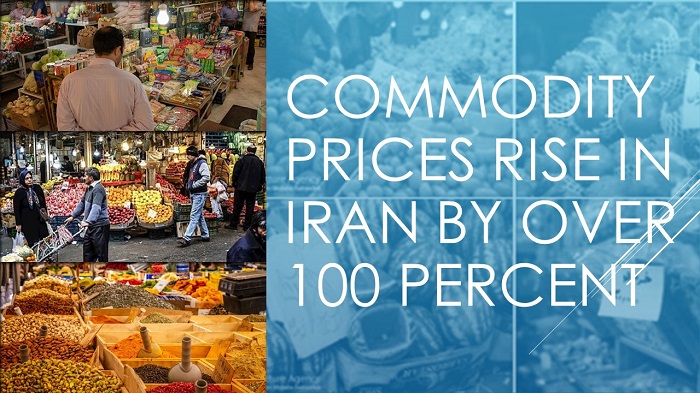 While the coronavirus is spreading throughout Iran and the majority of people have lost their jobs, many Iranian families are fighting to make ends meet, resulting in millions of people going hungry. To make matters worse, food costs are rising all around the country.

The uncontrollable rise in food costs

Meat costs are expected to jump by 20 to 30 percent this fall, according to regime officials. Due to excessive meat prices, many people have excluded meat from their menus.

One of the factors contributing to the rise in meat prices is government policy. A kilo of domestic meat used to cost around 740,000 rials (roughly $2.70). However, regime-linked enterprises, which are made up of a spate of small businesses with a mafia-style monopoly, have sought to import beef from overseas at a price of 1.2 million rials (about $4.40). As a result, the cost of domestic meat has increased.

Since March, the government has been importing meat without using the country’s meat stockpiles, according to Afshin Sadr Dadras, executive director of Iran’s Central Livestock Union. This reveals that the goal of the import is not to meet the country’s needs but to increase the mafia’s profits.

Poverty is rising in Iran

Poverty is rising in Iran in lockstep with the cost of essential necessities, posing socioeconomic difficulties that have become all-too-common on the streets of major cities.

The head of the Tehran City Council, Mohsen Hashemi Rafsanjani, declared on April 13 that the “Garbage Mafia” exploits 14,000 homeless people in Tehran, including little children.

The current situation of these youths, according to Rafsanjani, is an “unresolved issue” and a “growing plague” that has become a source of revenue for “organized economic gangs.” These “gangs” have ties to regime officials and entities, which is unsurprising.

Tehran has 14,000 garbage collectors, 4,700 of them are teenagers, according to a 2017 poll. 40% of these children are completely illiterate, 37% have dropped out, and they work an average of ten and a half hours per day.

Iran’s garbage trade, according to sources, is worth hundreds of millions of dollars. In Tehran alone, the dry waste cycle is valued at nearly 30 trillion rials each year (around $120 million), with informal waste collection accounting for 70% of the total.

As the death toll from Iran’s coronavirus outbreak climbs, the dictatorship continues to delay the acquisition of Covid-19 vaccinations, frightening the country’s people with even more anguish and suffering.

According to the Iranian opposition group the People’s Mujahedin of Iran (PMOI / MEK Iran), as of Saturday afternoon local time, August 21, approximately 376,400 people had perished from the new coronavirus in 547 cities across Iran’s 31 provinces. The regime’s official death toll is 99,108, roughly one-fourth of the total number of people killed.

Inflation, poverty, and an ever-worsening coronavirus pandemic have brought Iran’s society to the verge of collapse, and officials fear that the situation may spark another mass uprising.