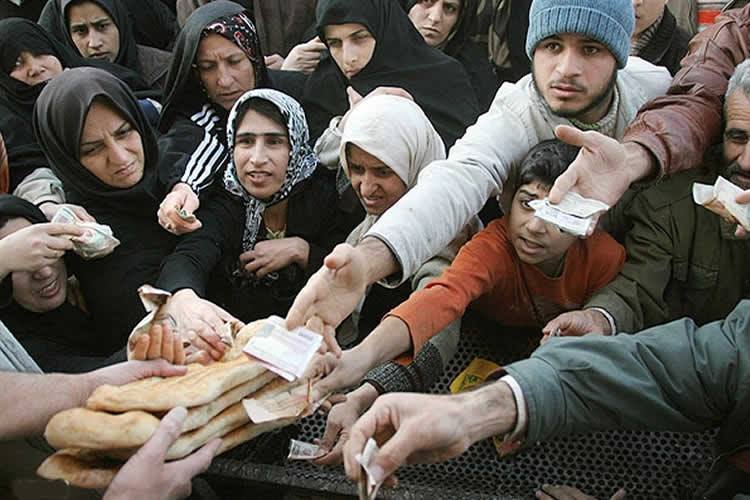 Iran’s socio-economic situation is becoming increasingly concerning, as the Ministry of Labor and Cooperatives’ Poverty Monitoring Report shows that 26.5 million people in the country live in absolute poverty.

This is something nearly impossible to escape, except for financial and non-monetary donations, and, of course, increasing the minimum wage’s purchasing power. However, to what extent can be employed and receiving a wage, could help people who are poor and have limited financial resources?

These numbers are indeed odd in light of the fact that yearly inflation was recorded at 36.4 percent. The country’s per capita poverty rate hit 1.245,000 Tomans in 2019, according to the Ministry of Labor and Cooperatives, although living on this amount of money seems impossible in metropolises.

The Ministry of Labor and Cooperatives declared a poverty line of 1,254,000 Tomans for 2020, which is unusual because buying a basket of edible goods for a month without paying for additional commodities such as clothing, transportation, healthcare, etc, costs more than 800,000 Tomans for a family of four.

The Ministry of Labor and Cooperatives addressed what poor people would face in 2020 in another section of the report, claiming that 100 percent of the jobs lost in 2020 (due to the coronavirus) were informal jobs, in which people from low-income deciles worked, and since wages and salaries accounted for about 75 percent of the income sources, the poverty rate rose to 32%, implying that 26.5 million people were living in abject poverty.

The poverty line in 2020 increased by 38 percent

Given that the poverty line in 2020 increased by 38 percent to 1,254,000 Tomans, it is expected that the number of people living in absolute poverty will reach around 30 million due to the widespread of the coronavirus in the country and the exit of about two million people from the labor market.

In any country, it is usual to publish poverty line data from government centers. However, the Iranian government has never published reliable figures on any issue. The official statistics on poverty in Iran do not appear to be consistent with market realities, because the cost of living in the country, particularly in the metropoles, seems impossible with a monthly wage of 1,245,000 tomans.

The poverty line and the minimum wage

Although the figure from recent years is based on speculation about the cost of living in Iran, it appears to be closer to reality, because, with annual inflation of 36.4 percent in 2020 and 66.6 percent point inflation for edible goods in March 2021, 1,245,000 Tomans do not appear to be sufficient to cover living expenses in the metropolitan areas.