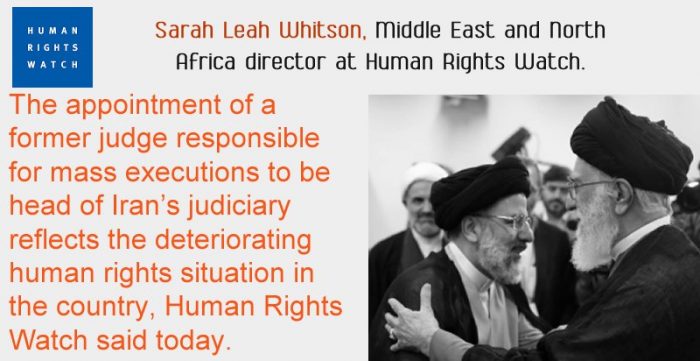 Ebrahim Raisi’s proclamation as the next Iranian regime president prompted swift international condemnation. Many organizations called for an international investigation into Raisi’s crimes against humanity, with headlines like “the butcher,” “torturer of pregnant women,” “heinous crimes,” and “mass murderer” topping international news.

Analyses of The National Council of Resistance of Iran (NCRI), and the People’s Mujahedin of Iran (PMOI / MEK Iran), say that Raisi’s appointment was made out of desperation by Khamenei.

Ali Khamenei, the Supreme Leader, needed to close ranks in order to safeguard his administration from escalating crises and mass protests.

Raisi is a protégé of Khamenei and owes his political career to him. Raisi passed the ultimate test of loyalty in 1988, after entering the state’s judiciary as an ignorant thug with an unquenchable propensity for killing democratic activists in 1979.

In that same year, the 28-year-old was named to manage the Death Commission, which was in charge of the execution of at least 30,000 political prisoners across Iran.

“That Ebrahim Raisi has risen to the presidency instead of being investigated for the crimes against humanity of murder, enforced disappearance, and torture is a grim reminder that impunity reigns supreme in Iran,” Amnesty International stated on Saturday.

Raisi was asked about his role in the 1988 massacre during his first post-election news conference. He boasted about how “he should be commended” for carrying out the genocide.

Mrs. Maryam Rajavi, President-elect of the National Council of Resistance of Iran (NCRI), commented, “It is clear that Raisi intends to continue his past crimes against humanity in the future.”

The oncoming popular protests have alarmed Khamenei and his administration. A tremendous amount of social outrage affects all levels of society.

Since 2017, there have been four unprecedented uprisings that have shaken the regime to its foundation.

All of the uprisings’ causes are still active. Iran’s economy is in shambles, and it ranks among the world’s ten most miserable countries.

The regime’s oppressive tactics were designed to keep the public outrage. However, gaps are beginning to show.

Raisi represents Khamenei’s last-ditch effort to reorganize and establish fresh lines of defense against the people and their uprisings.

The Iranian people demonstrated once again that their sole vote is to overthrow the dictatorship by boycotting the regime’s sham election.

The international community must unite behind the Iranian people and their organized democratic opposition, which is calling for a free, democratic, secular, and non-nuclear state. Appeasement or engagement with this terrorist regime is now much more irrational and unethical than it was before.

However, denouncing Raisi’s dark past is insufficient. He is one of the most ruthless criminals in the regime.  Raisi and other leaders must face justice for the atrocious crimes they committed against the Iranian people if international investigations into the 1988 massacre are to be undertaken. Anything less would embolden the regime to act in greater oppression and atrocities.