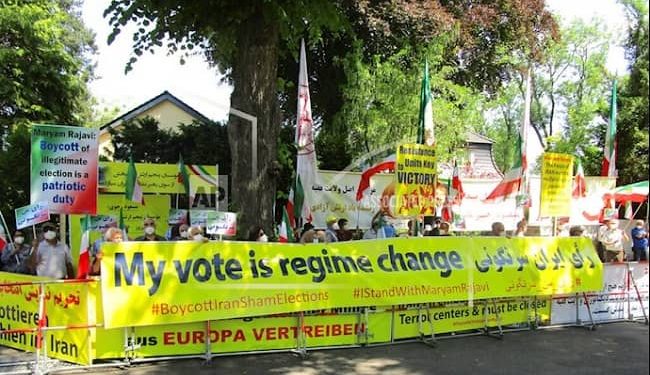 According to reports compiled by The National Council of Resistance of Iran (NCRI), and the People’s Mujahedin of Iran (PMOI / MEK Iran), at the culmination of the religious regime’s electoral charade, less than 10% of eligible voters voted in the presidential election. According to estimates from 1,200 journalists and 3,500 video clips from 400 cities gathered by Simay-e Azadi, Iran’s opposition TV network, polling stations were generally empty and attendance was low.

People refused to vote in the elections, disregarding the regime’s efforts. Military personnel, employees of the Ministries of Health, Agriculture, and Foreign Affairs, Education, and employees of state and commercial banks were all warned ahead of time that their identity papers needed to be stamped in order to vote.

Prison officials in Maku, Khoy, Bazargan, and Salmas promised inmates that anyone who voted would get three days’ leave. Officials in other cities attempted to buy people’s votes.

In addition, the regime restricted several polling locations in Tehran and other cities to prevent a low turnout and give the illusion of a large voter turnout, mostly for western journalists. Dozens of Simay-e Azadi reporters were detained and their phones have taken while filming empty voting places.

Ali Khamenei, the regime’s Supreme Leader, was the first to implore Iranians to vote in the sham election. He admitted on Wednesday that the “poor segments of society are discouraged and dissatisfied, and they do not want to vote in the elections.”

He also attempted to blame the “enemy” for the projected poor voter participation and criticized the opposing party. “Some within the establishment are attempting to persuade the people to change their minds. This is wrong. He stated, “They are spreading hopelessness.”

“If the people do not participate in the elections, the enemy will increase the pressure… If the people’s presence is weak, the establishment will become weaker, and the enemy will threaten the country with insecurity and terrorism,” Khamenei issued a warning.

On Friday, Khamenei’s worst fear came true when millions of Iranians rejected his regime’s national election. Khamenei was well aware that the electoral charade would be boycotted.

He only pulled Ebrahim Raisi because he wanted to address Iran’s restive people and the organized Resistance Movement. Raisi is a prominent human rights abuser who was wanted for crime against humanity in 1988.

The widespread boycott on Friday was the outcome of the campaign by the Iranian opposition, primarily the MEK and its “Resistance Units”.

In early April, the MEK began a campaign in Iran and, the Resistance Units conducted anti-regime activities in approximately 250 locations across 27 provinces.

In May, the MEK’s Resistance Units held events in over 310 locations around Iran, calling for a boycott of the regime’s sham presidential elections.

MEK supporters in the US, Canada, and Europe organized regular protests, reiterating their compatriots’ calls for a boycott.

Iranians boycotted the regime’s national election, rejecting a dictatorship that massacred over 1500 demonstrators in November 2019 and executed 30,000 political activists in 1988.

“The boycott proved and showed the world that the Iranian people’s only vote is to overthrow this medieval regime,” stated Mrs. Maryam Rajavi, President-elect of the National Council of Resistance of Iran (NCRI). The nationwide boycott reflects the Iranian people’s great battle for justice and is the result of the martyrs’ sacrifices.”