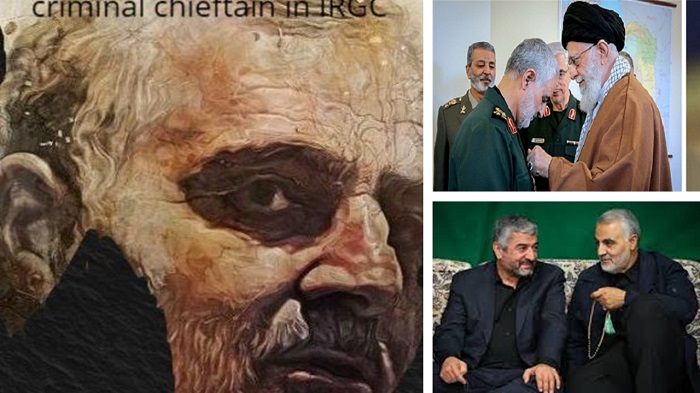 The former head of the IRGC Quds Force, Qassem Soleimani, was killed by a United States air attack in Baghdad on January 3, 2020. Qassem Soleimani was directly involved in the violent crackdown on Iran’s student protests in 1999 and nationwide protests in 2009, according to the former commander of the notorious Revolutionary Guards (IRGC), Mohammad Ali Jafari.

Hossein Amir-Abdollahian provides more details on how #Iran plans to mark anniversary of Soleimani's death: ceremonies will last until January 16; a major conference will be held in person; and separate events will take place in region. 1/2https://t.co/MjID1m9H8j

As commander of the Islamic Revolution Guards Corps (IRGC) Qods Force, Soleimani was Iran’s main architect of a network of state and non-state allies in the region to expand the Islamic Fundamentalism influence.

With the first anniversary of Soleimani’s death days away, state-run media in Iran is full of stories portraying Soleimani as an Iranian hero and an international Islamic hero. But as Iranian officials and regional groups close to the mullahs’ regime praise Soleimani, information on Iran’s military and financial support for groups such as Hezbollah in Lebanon and Hamas in Palestine is leading to criticism from the main Iranians opposition, the  People’s Mojahedin Organization of Iran (PMOI / MEK Iran), and the National Council of Resistance of Iran (NCRI) to the regime.

3)
"As long as Iran has money, that means we here have money, too," said Lebanese Hezbollah chief Hassan Nasrallah.

Hezbollah leader Hassan Nasrallah declared in an interview on December 27 that Qassem Soleimani was instrumental in providing large amounts of money from Iran’s to Hezbollah, in addition to weapons and missiles. Estimates of Iran’s past financial assistance to the group range from $500-700 million annually, although Iran’s current ability to provide money is restricted given its dire financial situation resulting from corruption and US sanctions.

Hassan Nasrallah disclosed that after the 33-day war with Israel in 2006, Iran paid for one year the rent and living expenses of 200,000 families whose homes had been destroyed or damaged by Israeli attacks. The fact that Iran paid up to $30,000 to families in 2006 has long been public knowledge, but the cost of the assistance is staggering: If the average handout to each family was $20,000, in a country of 4 million people, Iran spent at least $4 billion dollars that went mainly to the Shiite community.

In an interview also on December 27, with mullahs regime, state-run Arabic news channel Al-Alam, Mahmoud Al-Zahar, a founding member of Hamas, said Soleimani had passed him suitcases containing $22 million during a visit to Tehran in 2006 as foreign minister in the Palestinian administration of prime minister Ismail Haniyeh.

Mahmoud al-Zahar, one of the commanders of the Hamas militia:
"Qassem Soleimani handed us $ 22 million at the airport.#Iran #Terrorism #IRGCTerrorWithoutBorders #DisbandIRGC pic.twitter.com/jn01h7Le3W

This led to a hashtag saying “Suitcases full of dollars” in Persian tweets and social media, criticizing the mullahs’ regime for caring more about non-Iranian groups in the Middle East than its own population.

During anti-government protests, Iranian people on the streets chanted slogans against sending money to Hezbollah, Hamas, Yemen’s Houthis, and against spending resources in Syria to help keep President Bashar al-Assad in power. Iranian critics bemoan unemployment and poverty in the country, demanding money be spent on Iran’s citizens.

Living standards have plummeted since 2018(link is external) mainly due to US sanctions, with ordinary Iranian workers earning $100-150 a month, which is inadequate for basic necessities. With oil exports reduced significantly since US sanctions were imposed in mid-2018, Iran’s assistance to regional allies and proxies has declined.

It was also well-known that the Soleimani was in charge of the suppression of protests in Iraq, Syria, and Iran in the months before his death, as well as the murder of dissidents abroad including members of Mujahedin-e Khalq (PMOI / MEK Iran), so why would the Iranian people be sorry about his death?