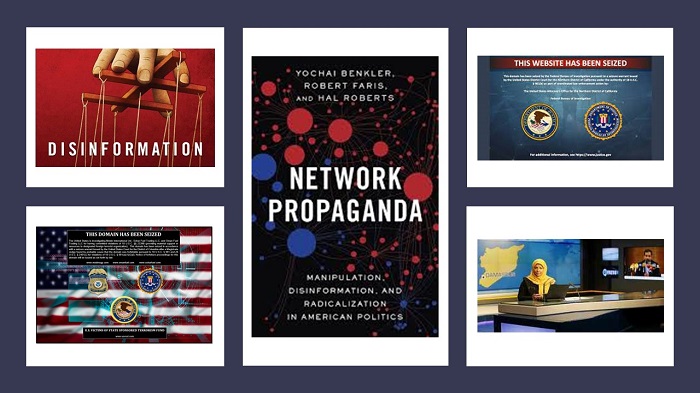 According to the reports by The National Council of Resistance of Iran (NCRI), and the People’s Mujahedin of Iran (PMOI / MEK Iran), United States seized a number of websites linked to the Iranian regime’s propaganda networks early this week, leading Iranian authorities to redirect media outlets like English-language Press TV to new domain names with Iran-specific extensions.

“American authorities seized a range of Iran’s state-linked news website domains they accused of spreading disinformation, the US Justice Department said Tuesday, in what appeared to be a far-reaching crackdown on Iranian media amid heightened tensions between the two countries,” according to the Associated Press.

The report joins a slew of other pieces of evidence pointing to the continued spread of Iranian government propaganda not just in the UK, but around the world.

It comes just five months after the US indicted a Massachusetts political scientist for more than 13 years of working as a paid agent of Iran’s regime, and four months after a former operative in Iran’s online propaganda campaigns wrote a letter to the UN Secretary-General offering to testify on the matter “before any court or impartial authority.”

These examples highlight the Iranian Ministry of Intelligence’s and allied institutions’ multi-layered strategy for disseminating their talking points on a worldwide scale.

Those organizations may have outstanding and legitimate credentials in some situations. Kaveh Loftolah Afrasiabi, the subject of the January indictment, worked as a political scientist and was published in research journals and news sources throughout the time he earned more than a quarter-million dollars in illegal remuneration from the Iranian government.

Hadi Sani-Kani, an Iranian expatriate, wrote a letter to the UN Secretary-General in February in which he discusses joining the People’s Mojahedin Organization of Iran (PMOI-MEK), the leading Iranian opposition group, in 2003 and then leaving in 2016 after relocating to Albania with a core MEK community that had been struggling to survive in Iraq since the withdrawal of US forces.

Hadi Sani-Kani opened his letter by noting that he joined the PMOI in 2003 and resigned two months later, two months after he and hundreds of other former members of the group’s Iraqi community were transported to a new base in Albania.

The major issue is the regime’s multi-tiered foreign propaganda strategy’s self-reinforcing character. Even if the accused Iranian regime lobbyists were removed from the media landscape overnight, their propaganda would continue to circulate through both legitimate and evidently false news outlets where they have already established a foothold.

Uprooting that kind of misinformation will require a multi-layered approach, much like the method for disseminating it in the first place.

Journalists must be trained to distinguish Iranian talking points and sources who are likely to have ties to the Iranian regime. Law enforcement authorities must keep a closer eye on those same sources and make a more determined effort to hold paid agents accountable in the same way that Afrasiabi is.