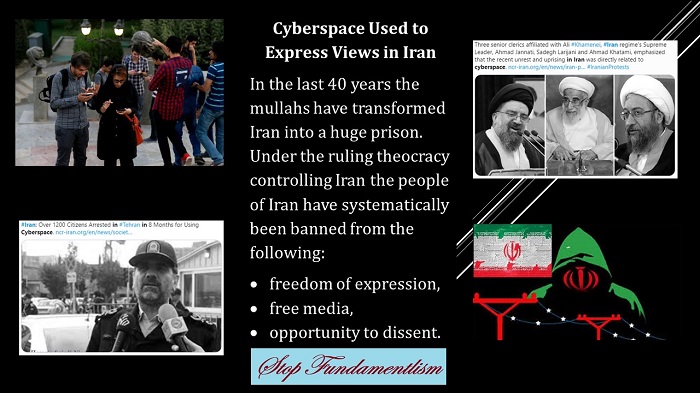 In the last 40 years, the mullahs’ regime has transformed Iran into a huge prison, according to The  People’s Mojahedin Organization of Iran (PMOI / MEK Iran), and the National Council of Resistance of Iran (NCRI). Under the ruling theocracy controlling Iran the people of Iran have systematically been banned from the following:

If any Iranian is caught it is considered to be an unforgivable crime and the penalty imposed could be life imprisonment, torture, and physical elimination, such as the death penalty.

When it comes to publishing facts, the regime’s Supreme Leader only allows what he supports. Today, 81-year-old Ali Khamenei is Iran’s Supreme Leader and his position was inherited from the mullahs regime founder, Ruhollah Khomeini, in 1989. It is predicted that Khomeini has already decided who will be his heir and that is his son Mojtaba.

The growing popularity of the #MEK, particularly in cyberspace and turning the Iranian youth to the Internet, compelled the #Iranian regime to take this threat more seriouslyhttps://t.co/1L9itfIjx5#Iran #FreeIran @USAdarFarsi pic.twitter.com/k1JY0OeDju

Throughout their hold on power since 1979 Iranian citizens have had their wishes diverted, such as their struggle for equality and freedom. Instead of being democratic, the government has created a cruel dictatorship using faith as its weapon.

Fortunately, communications today have allowed Iranians to raise grievances and organize mass protests. This has meant that human rights violations can be spread quickly both nationally and internationally and could lead to the international community punishing the dictator.

In late August, Iranian citizens had put pressure on the government to remove the death penalty for 3 young men detained by the State Security Forces (SSF) during mass protests in November 2019. It was social media activists who attracted the international community’s attention to Navid Afkari’s case but they did little to save him from the death penalty.

#PMOI #MEK #Iran: 3 young men were arrested following November 2019 uprising facing the death penalty in Iran #Maryam_Rajavi called on the international community to do what it can to intervene on behalf of the condemned prisonershttps://t.co/JetNneWI3b #coronavirus @USAdarFarsi pic.twitter.com/eObEwELV18

The so-called reformist’ Abbas Abdi warned the government about challenges it was likely to face with newly incorporated cyberspace.  He said that the country’s key challenge related to not the foreign relationship nor the economic field but the cultural area and monopolized media that have divided society and drawn it into cyberspace.

In reality, the government’s oppressive actions have pushed the people to find news using ‘unofficial’ sources, because ‘official’ sources broadcast and publish only fake news and propaganda against political dissidents, minorities, and other countries. Failing to restrict people’s thoughts and acknowledges is an authorities’ real nightmare. They occasionally name it ‘losing the state’s social resources’ or ‘ending the people’s resilience;’ however, it has an apparent outcome: more anti-establishment protests.