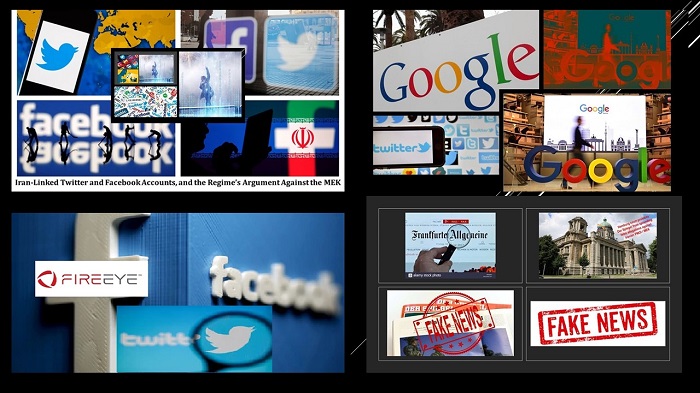 The findings of Facebook’s September report on coordinated inauthentic conduct were just disclosed, and it highlighted the latest in a string of huge takedowns of fraudulent content originating in Iran.

According to the report, 93 Facebook accounts and 194 Instagram profiles, as well as 14 different pages and 15 groups, were removed from the network in question. These figures may seem insignificant in comparison to the thousands of accounts that Facebook and Twitter have removed in recent years, but they highlight the fact that the Iranian regime’s disinformation is a recurring feature of the social media landscape, and that efforts to combat it have so far been only sporadic.

In its Monday disclosures, Facebook shared screenshots as examples of the relevant inauthentic behaviour. In one, the account owners targeted the People’s Mojahedin of Iran (PMOI / MEK Iran), Iran’s major pro-democracy opposition group, and reiterated common charges about the organisation’s lack of popular support inside Iran.

Response to a nationwide uprising

This message, however, was undermined years before by none other than Khomeini’s successor as the regime’s supreme leader, Ali Khamenei, who stated in response to a nationwide uprising in January 2018 that the MEK had “planned for months” to facilitate protests and popularise anti-government slogans. The rebellion drew people from all walks of life in Iran, including a sizable contingent of the country’s young, and spanned more than 100 cities and villages. In November 2019, less than two years later, the MEK was credited with leading another state-wide uprising, this time involving roughly 200 cities.

Almost immediately after the uprising began in 2019, state forces opened fire on demonstrators in a number of cities, killing over 1,500 people in a few days. At the time, Ebrahim Raisi, the regime’s current president, was the head of the judiciary, and his role in the crackdown only added to his reputation as the “butcher of 1988,” a moniker he earned as a result of his leadership role on the Tehran “death commission,” which oversaw the execution of 30,000 political prisoners, mostly MEK members.

The regime’s domestic-focused on social media

However, the regime’s current domestic-focused initiatives in both traditional and social media have not prevented it from propagating propaganda outside its boundaries. In fact, the Iranian regime’s domestic and international disinformation often work in tandem as part of a feedback loop in which state media talking points fuel foreign media infiltration, resulting in publications that the Iranian regime can then use as “independent” verification of its libellous claims.

Aspects of this feedback loop were revealed in a letter written in February by Hadi Sani-Kani, a former MEK member who acknowledged being recruited by the Iranian Ministry of Intelligence and Security to write fake narratives about it shortly after his departure from the MEK. Sani-Kani stated that he was “prepared to testify before any court or impartial authority” about the MOIS disinformation strategy’s tactics and content, and the importance of such testimony has been reaffirmed several times since then, most recently with Facebook’s report on the ongoing spread of state-affiliated social media disinformation.

The indictment of Kaveh Loftolah Afrasiabi

Just a month before that letter was published, American authorities announced the indictment of Kaveh Loftolah Afrasiabi, a Massachusetts academic who pretended to be an independent expert on Middle Eastern affairs in order to gain exposure in multiple Western news outlets while receiving more than a quarter-million dollars in financial compensation from the Iranian regime over a 13-year period.

Following the indictment, nine members of the United States House of Representatives wrote a letter to the Department of Justice asking investigations to find anyone else who may have engaged in similar behaviour. Regardless of the status of this request, it is becoming increasingly clear that efforts to counter Iranian disinformation require a broader and more multilateral approach, combating influence networks on social media as well as in the journalistic community, and in the Western world as well as within Iran.