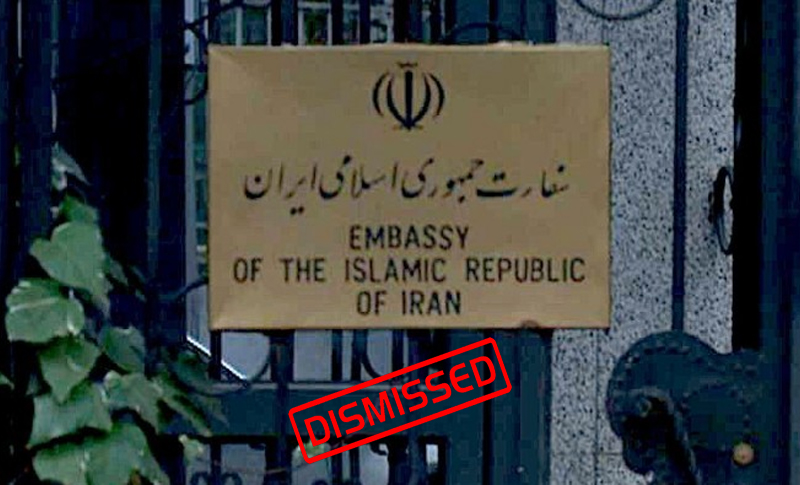 On Saturday night, Mohammad Ali Arz Peimanemati and Seyed Ahmad Hosseini Alast were ordered to leave Albania as persona non grata and Albanian anti-terrorism units followed tight security measures to move them out of the country, with 20 anti-terrorism officers escorting the men and their families to the airport.

The Albanian Europe and Foreign Affairs Ministry accused the men of carrying out measures in violation of their status and the Vienna Convention principles in regard to diplomatic relations.

Iranian opposition President and head of the National Council of Resistance of Iran (NCRI) Maryam Rajavi praised Albania for this move and encouraged other countries to do the same, as Iranian embassies worldwide are filled with terrorists.

She tweeted: “The government of Albania’s expulsion of two of the Iranian regime’s diplomats is a courageous and admirable measure in fighting terrorism and ensuring the security of the people of Albania and Iranian refugees. Other European countries must learn from Albania. Representative offices of the Iranian regime are centres of espionage and terrorism.”

She further advised, as she has done on many occasions, that the Iranian regime’s embassies in foreign countries are centres for espionage and terrorism, with most so-called diplomats actually being Intelligence Ministry agents or Revolutionary Guards (IRGC) officers. If not, Rajavi says they will have been given terrorism and espionage training to serve that purpose.

Rajavi said: “With the Iranian people calling for the mullahs’ overthrow in the streets, it is particularly important to adopt a decisive policy vis-à-vis the regime’s terrorism and shut down its embassies in other countries.”

This, of course, is not the first time that Albania has had to expel an Iranian diplomat. In December 2018, they expelled the mullahs’ ambassador and head of the intelligence branch, citing security and terrorism threats. These two were linked with now-dead regime terrorist Qassem Soleimani

They had been warned previously by the People’s Mojahedin Organization of Iran (PMOI/MEK), Iranian dissidents living in Albania, that ambassador Gholam-Hossein Mohammadnia was specifically sent there to target the MEK, emphasising that he and all other Iranian diplomats should be expelled from Albania.

At the same time as the expulsions from Albania, US Secretary of State Mike Pompeo announced that the Iranian regime had planned two terror attacks in Albania, while European countries neutralized three Iranian regime plots in 2019 alone.