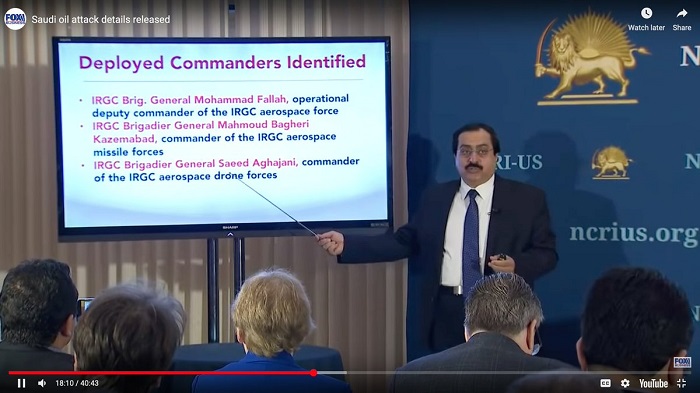 New sanctions were imposed by the US Treasury on Iran’s Revolutionary Guard Corps (IRGC), as well as the IRGC Quds Force drone network and its commanders. Four IRGC officers have been added to the sanctions list: Yousef Aboutalebi, Saeed Aghajani, commander of the IRGC Aerospace Force UAV Command, Abdollah Mehrabi, and Mohammad Mohammad Ebrahim Zargar Tehrani.

Two companies linked to the regime’s harmful drone activity were also sanctioned in addition to these individuals:

Kimia Part Sivan Company LLC and Oje Parvaz Mado Nafar Company, which are both linked to the IRGC’s Quds Force.

“Today, the US Department of Treasury’s Office of Foreign Assets Control (OFAC) designated members of a network of companies and individuals who provided critical support to Iran’s IRGC and its expeditionary unit, the IRGC Qods Force’s Unmanned Aerial Vehicle (UAV) programs.”

“The IRGC-QF has used and distributed lethal unmanned aerial vehicles (UAVs) to Iran-backed groups such as Hizballah, HAMAS, Kata’ib Hizballah, and the Houthis, as well as to Ethiopia, where the escalating crisis threatens to destabilize the region. Attacks on foreign ships and US military have both been carried out with lethal UAVs.”

“Treasury will continue to hold Iran accountable for its irresponsible and violent acts,” the US Treasury said.

Several executive orders placed the IRGC on the sanctions list in part and in full between 2007 and 2017, the most recent of which was on October 13, 2017, when the entire IRGC was placed on the US sanctions list.

Drones are one of the dictatorship’s main weapons

Drones are one of the dictatorship’s main weapons for exporting terrorism and warmongering, therefore despite a terrible economic crisis, the regime has invested extensively in drone development and given a large budget.

Its international wing, the terrorist Quds Force, is employing the regime’s various drones to strike and destabilize other countries in the area. The regime is compensating for its aeronautical deficiency with these drones since it has been unable to build a war-effective air force since its inception, owing mostly to international sanctions.

To make drones, the regime imports some of the essential components, such as engines and electrical components, from other countries and manufactures the rest at home.

In Iran, a total of eight industries are active in drone production. Some of these businesses are subsidiaries of the regime’s Air Industries Organization, which is part of the Ministry of Defense. Another section of these factories appears to be related to the IRGC Air Force and other regime-affiliated armed groups.

The leadership is attempting to gain further concessions

Each of these is in charge of constructing various pieces of the drones and eventually assembling them. These sanctions, particularly those associated with the IRGC, which are the government’s main pillars of repression and warmongering, are critical as the US and European countries pursue a new nuclear deal with the regime.

The leadership is attempting to gain further concessions from the international community in the hopes of lifting sanctions.

As we saw, the regime’s spokesman for international affairs, Saeed Khatibzadeh, was enraged by the new US Treasury restrictions on its drone program and said:

“The imposition of new sanctions reflects the White House’s completely contradictory behavior. The U.S. government says it intends to return to the JCPOA but continues the same approach as the previous administration in imposing sanctions. America is not really trustworthy by sending this message. The U.S. imposes new sanctions on Iran, including four individuals and entities.”