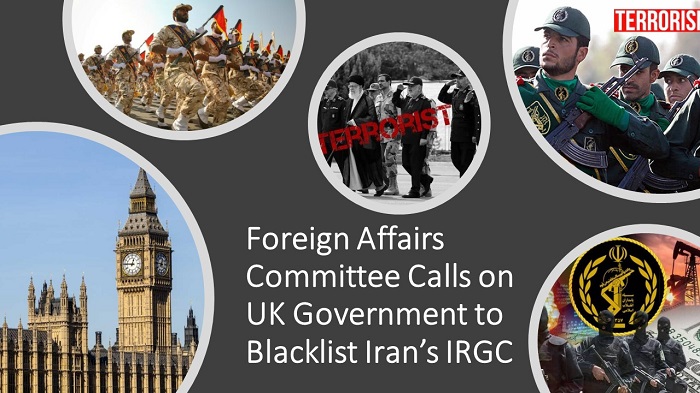 The People’s Mojahedin Organization of Iran, and the National Council of Resistance of Iran (NCRI), reported that the Foreign Affairs Committee of the United Kingdom’s House of Commons has called on the British government to take action faced with the Iranian regime’s belligerence and the clear threat that it represents. The committee has called on the government to designate the notorious Islamic Revolutionary Guard Corps (IRGC) as a terrorist entity.

New @CommonsForeign report on Iran urges the UK to proscribe the Revolutionary Guards as a terrorist group: https://t.co/UiVZYds6Nl

The move has cross-party support, with 37 MPs signing a motion last year urging @GOVUK to join @StateDept in blacklisting IRGC.

In their report, the members of the committee emphasized that the entire organization must be proscribed because it is continuing to undermine stability in the Middle East.

The report highlights that the IRGC holds no regard for human rights and there are numerous witnesses to its violations both across the region and against the people of Iran too. In particular, the IRGC’s involvement with the brutal suppression of the uprising that took place in November last year in which more than 1,500 protesters were brutally killed.

The members of the committee agreed that the actions carried out by the IRGC are more than sufficient for it to qualify as a terrorist organization as per the guidelines set out by the Terrorism Act 2000. They say that it is “a logical extension of the existing restrictions placed on members of the IRGC by the EU’s sanctions regime” because of the IRCG’s “philosophy and malign actions within Iran and across the region”. The report said that the IRGC’s actions are contrary to the values and interests of the United Kingdom and the people of Iran.

The United States has already recognized the IRGC as a terrorist entity and it was formally designated as Foreign Terrorist Organization (FTO) last year.

The National Council of Resistance of Iran (NCRI), the main opposition to the Iranian regime, (PMOI / MEK Iran) has been calling for this action for years. The NCRI’s President-elect Mrs. Maryam Rajavi has said on countless occasions that restricting the IRGC’s funds and resources is in the best interests of the people of Iran and the wider international community. Given the increasing amount of terrorist activity being plotted on European soil, it would be in the best interests of all Western governments to proscribe the IRGC.

The NCRI has been reporting on the IRGC’s terrorist activities in the region, emphasizing that it provides significant financial support to other terrorist organizations such as Hamas in Palestine and Hezbollah in Lebanon.

Today, the FAC recommends @FCDOGovUK adopts an #Iran policy that:

The IRGC’s aim at home is to quash all dissent especially (NCRI) and (PMOI / MEK Iran) to protect the regime against the people, especially during times of mass protests and uprisings. The IRGC and its forces were ordered by Supreme Leader Ali Khamenei to do what it takes to silence the people and put an end to the uprising that took place in November last year. As a result, more than 1,500 protesters were killed and more than 4,000 seriously injured.

The NCRI’s UK representative has welcomed the Foreign Affairs Committee’s report and recommendation. Ms. Dowlat Nowrouzi said that the IRGC should have been proscribed a long time ago and it is a necessary action to stop the regime’s terrorism in Europe.