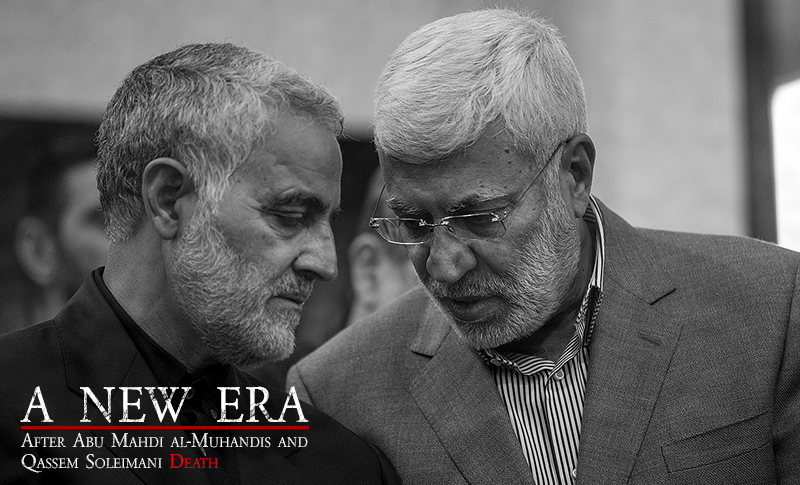 From December 27, 2019, to January 1, 2020, Iraq became a field of competition between the Iranian regime’s proxies and the United States forces. The competition was triggered by Kata’ib Hezbollah’s missile attacks on Base of Operation Inherent Resolve (OIR) that caused the death of one U.S. civilian contractor and wounded several Americans and Iraqis.

“We will not stand for the Islamic Republic of Iran to take actions that put American men and women in jeopardy,” U.S. Secretary of State Mike Pompeo told reporters on December 29.

In response, U.S. forces conducted defensive attacks against five Kata’ib Hezbollah’s facilities in Iraq and Syria on December 29. Iraqi Hezbollah avoided to announce the death toll, but reports obtained from coroner’s offices and morgues revealed more than 50 Kata’ib Hezbollah (KH) members were killed and above 80 injured. 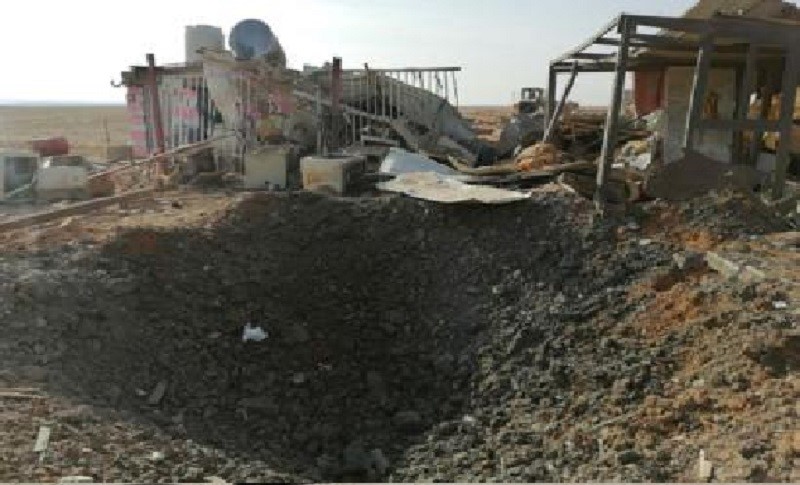 Photo of Kata’ib Hezbollah base after the U.S. precision airstrike attack on December 29, 2019

On December 30, Abu Mahdi al-Muhandis, leader of KH, claimed that his militants will take revenge on U.S. military Forces. A day later, Iran-backed militias, pretending to be Iraqi protesters, assaulted the U.S. embassy in Baghdad and damaged parts of its gate. The damages are estimated at $100 million.

Since January 1, the United States also dispatch AH-64 Gunships and extra marines to the embassy and informed loyal militias to Tehran, stressing that it will conduct an excessive response if they make any mistake. At the night, the militias’ headquarters demanded their followers to withdraw from the embassy.

Caption: Barbaric tries of Iran-backed militias, including Kata’ib Hezbollah members, to occupy the U.S. Embassy in Baghdad on December 31, 2019

These eventful four days held many lessons about how the Iranian regime’s proxies operate in Iraq and how their aggressions can be foiled.

The History of the Kata’ib Hezbollah 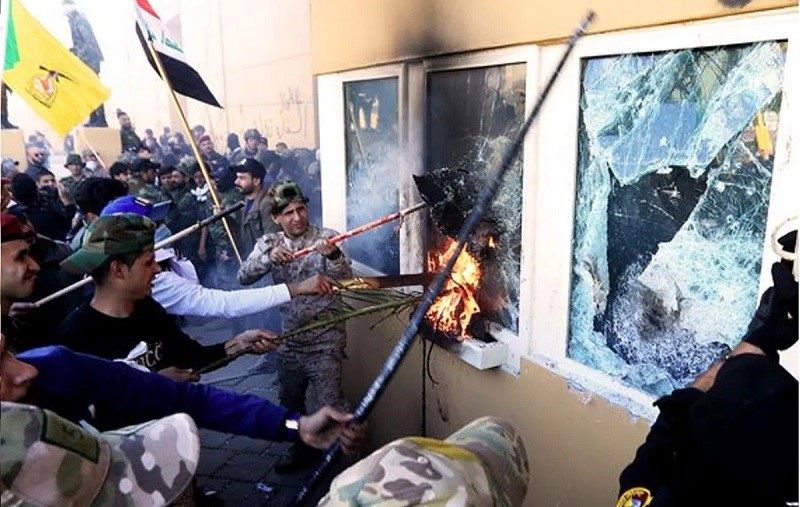 Iraq’s Kata’ib  Hezbollah, militants loyal to Tehran rather than Baghdad. They see Ali Khamenei as their “spiritual leader.”

Kata’ib Hezbollah is a relatively small Iraqi Shiite militia group that serves as one of the channels through which the Islamic Revolutionary Guards Corps (IRGC)’s Quds Force projects power in Iraq. The Iraqi version of the Lebanese Hezbollah originally formed in 2003 as an umbrella for several Iran-backed militant groups. The “Iraqi” Kata’ib Hezbollah have become so integrated into the Iranian regime that its members see Ali Khamenei as their “spiritual leader.”

On July 2, 2007, the U.S. Department of Treasury designated Al-Muhandis and Kata’ib Hezbollah terrorist individual and entities under Executive Order E.O. 13438 and E.O. 13224. Designations were adopted due to their role in committing, directing, supporting, or posing significant risks of committing acts of violence against Coalition and Iraqi Security Forces. In this regard, Treasury’s Office of Foreign Assets Control was assigned to prohibit all transactions between the designees and any U.S. person and freeze any assets the designees may have under U.S. jurisdiction.

In July 2011, an Iraqi intelligence official estimated the group’s size at 1,000 fighters and said the militants were paid $300-500 per month.

In 2014, when the Islamic State (ISIS/ISIL) invaded Iraq, Abu Mahdi al-Muhandis seized the opportunity to expand Kata’ib Hezbollah. In this context, KH became one of the groups within the Popular Mobilization Units (PMU) and al-Muhandis became the deputy commander of the PMU. Iraqi Hezbollah created two brigades in the PMU, the 45th and 46th. It also has affiliates in the 47th brigade, numbering some 3,000 fighters.

Kata’ib Hezbollah was among the earliest Iraqi groups to dispatch fighters to Syria, where it helped organize groups including Liwa Abu-Fadl al-Abbas, a militia composed of Iraqi Shiites. In 2015, a KH official told the Washington Post that Kata’ib Hezbollah had sent 1,000 fighters to Aleppo in response to a direct request by Soleimani. It is worth reminding that the founder and leader of this group Abu Mahdi al-Muhandis is closely linked to both the IRGC Quds Force commander Qasem Soleimani and Lebanese Hezbollah’s leader Hassan Nasrallah. 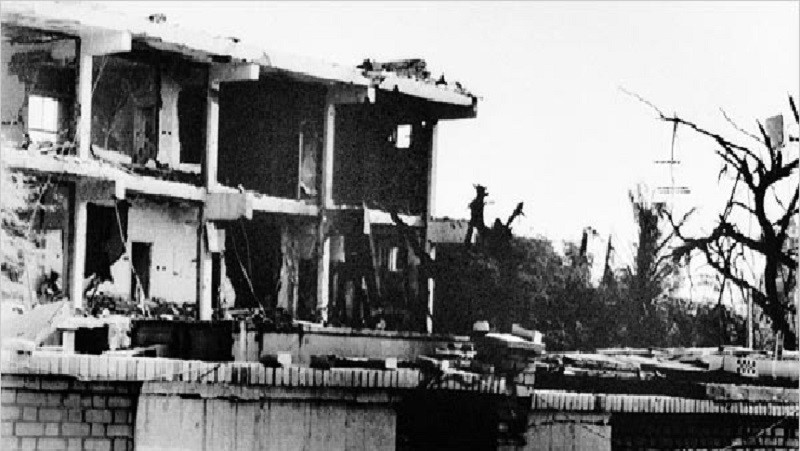 Photo of wreckage after the United States Embassy in Kuwait was bombed on Dec. 12, 1983 – from NYTimes

Jamal Jafaar Mohammed al-Ibrahimi or Abu Mahdi al-Muhandis [engineer], as he would like to be called, was notoriously renowned by organizing attacks on embassies in the 1980s. On December 12, 1983, a Kuwaiti court convicted him on charge of bomb attacks on U.S. and French embassies, which killed six people and injured another 80, including citizens of western countries in this sovereignty.

Of course, he had previously fled to Iran only hours after his cooperative terrorist operations with the Revolutionary Guards (IRGC). The ayatollahs later appointed him as a military adviser to the IRGC’s Quds Force. He purportedly appeared in several video clips appearing to execute Iraqi soldiers taken captive by the Iranian Army in 1985, during the Iran-Iraq war.

Until now, Abu Mahdi al-Muhandis has fled three times; in 1979, 1983, and 2008, all to Iran where he was trained along with Quds Force officers. However, nowadays, he lives 200 meters from the Kuwaiti embassy in Baghdad, slightly further away from the United States embassy at the heart of the Green Zone. Despite being wanted by Kuwaiti and US authorities, as well as by Interpol; al-Muhandis appeared at front line of the Iranian regime’s mercenaries who rallied in front of the U.S. embassy in Baghdad in late December. 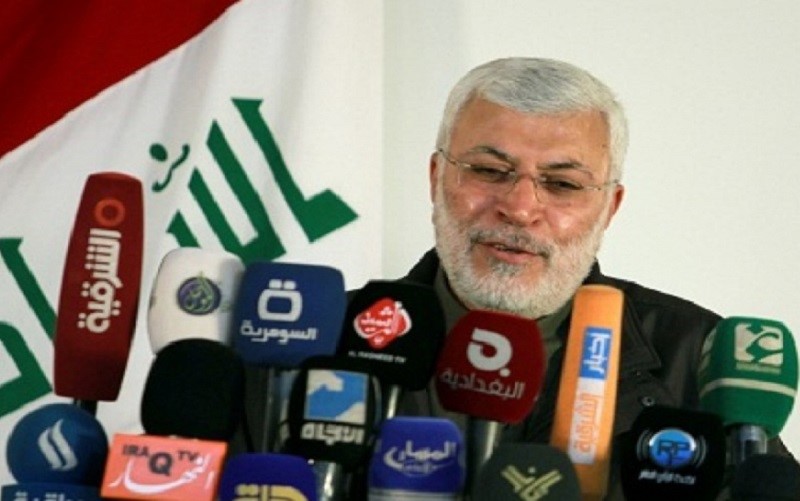 Photo of first press conference of Abu Mahdi al-Muhandis, the leader of Kata’ib  Hezbollah, on January 1, 2015 – from Alaraby

In a press conference held in the Green Zone on January 1, 2015, Muhandis’ first ever press conference, he described himself as a military commander and a “defector” from the Iranian Revolutionary Guards Corps (IRGC). He also presented himself as the president of the PMU militia (al-Hashd al-Shaabi). In the same conference, the so-called defector of the IRGC al-Muhandis attacked Saudi Arabia and the US, which he described as the sponsor and supporter of the Islamic State group.

Between March 2007 and June 2008, Baghdad-based Kata’ib Hezbollah came to prominence for attacks against American and coalition forces in Iraq and was known for uploading its videos of attacks on American forces on the internet. These attacks targeted U.S. tanks and bases in Baghdad, which resulted in death and injuries among U.S. civilians and Coalition Forces personnel.

In response, in mid-2008, US and Iraqi forces launched a crackdown against Kata’ib   and captured dozens of its leaders and members. U.S. forces announced, “As result much of the leadership (Abu Mahdi al-Muhandis) fled to Iran.”

As of 2008, the group stepped in a new circumstance and received funds and weapons training from both IRGC’s Quds Force and Lebanese Hezbollah. Quds Force’s officers and Hezbollah’s experts trained Iraqi Hezbollah’s members on building and planting IEDs and coordinating small and medium arms attacks, sniper attacks, mortar attacks, and rocket attacks. 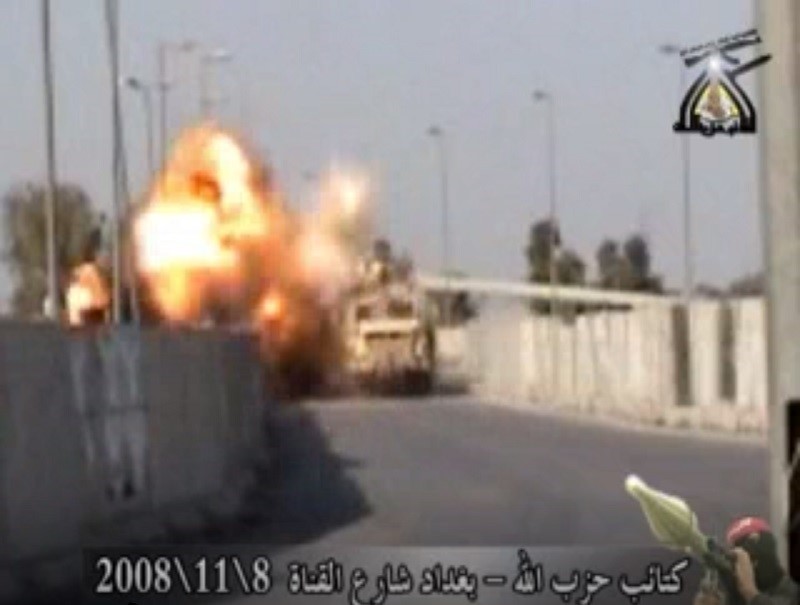 On July 2, 2009, the U.S. State Department added the group to list of Foreign Terrorist Organizations on charges of employing their training against U.S. and Iraqi forces and the Green Zone, including a November 2008 rocket attack that killed two U.N. workers.

On February 12, 2010, the U.S. military acknowledged a firefight with suspected members of the group 265 km southeast of Baghdad in a village near the Iranian border, which resulted in eight killed and twelve arrested.

The U.S. Commander in Iraq named Kata’ib Hezbollah being behind threats against American bases. “In the last couple weeks there’s been an increased threat [by Kata’ib Hezbollah] and so we’ve increased our security on some of our bases,” General Ray Odierno told reporters at a briefing in Baghdad on 13 July 2010.

Kidnapping a Qatari royal hunting party in 2015 counted as one of the extra-judicial activities of Iraqi Hezbollah. According to Forbes report, the group later received $700 million to release the hostages.

In October 2017, Kata’ib Hezbollah played key role behind offensive of Iran-backed government against the autonomous Kurdistan region. Iran-backed militants led by al-Muhandis clashed with the Peshmerga and lowered the Kurdish flag in Kirkuk. 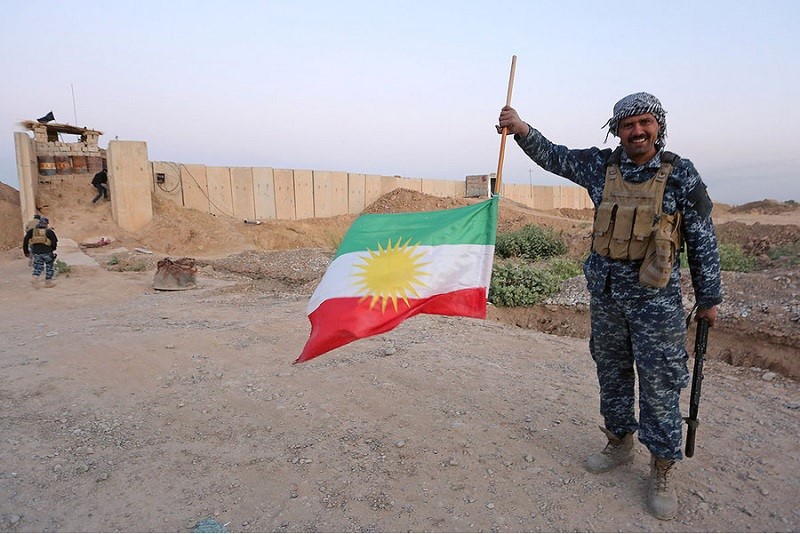 Iran-backed militias boast about controlling Kirkuk, semi-Kurdish province in Iraq, after a bloodshed

Kata’ib Hezbollah’s headquarters also were involved in helping direct ayatollahs’ policy to aid the Assad regime and traffic weapons for Iran. Kata’ib Hezbollah was allegedly behind a drone strike on Saudi Arabia on May 14, 2019 and an attack near the US Green Zone the same month.

In July 2019, following the details obtained by U.S. removed non-emergency staff from its embassy in Baghdad and closed its consulate in Basra. The obtained information was about planning operations militias loyal to Tehran pertaining to kill Americans, coalition partners and Iraqis and U.S. diplomatic facilities and continue to conduct indirect fire attacks.