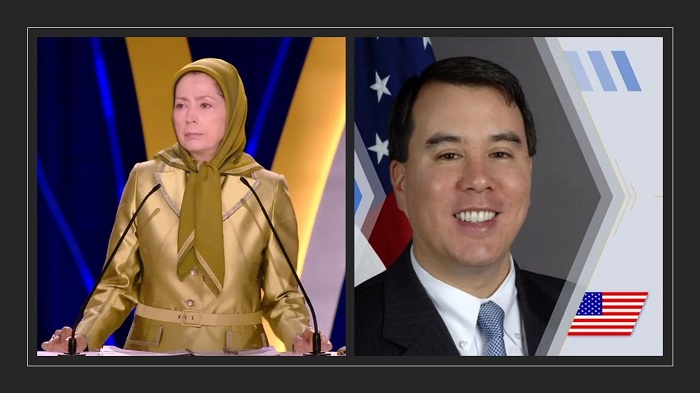 Transcript of remarks by former U.S. Under Secretary of Defense for Policy John Rood at worldwide internet conference focusing on the mullahs’ support for terrorism and shutting down its embassies- July 20, 2020.

Well, thank you very much for having me to speak to you today. First, let me compliment Mrs. Rajavi (the President-elect of the National Council of Resistance of Iran’s (NCRI))on that powerful address. It’s also incredibly impressive the way that the organizers have brought together so many from so many different locations in a very interconnected way. In today’s world, with all the challenges we face to putting together this type of conference, it’s impressive that you have overcome those challenges and you should feel very proud of the way that you have connected everyone.

Former U. Under Secretary of Defense for Policy John Rood: Iran's regime remains the world’s leading state sponsor of terrorism. Terrorism has been at the heart of the regime since the 1979 revolution. #ExpelIranDiplomatTerrorists #FreeIran2020 https://t.co/X20S3087AE

This ideology embraces terrorism as a tool of statecraft. And the ideology promoted by Ayatollah Khomeini envisioned spreading this revolution across the region and the Supreme Leader who is in power today remains committed to this vision. We have seen the Iranian regime using Iranian forces and utilizing its embassies and people registered as diplomats to conduct and support terrorism across the Middle East and globally in Europe, Africa, Asia, even in North America and South America.

The extradition of Iranian “diplomat” Asadollah Assadi from Germany to Belgium for his role in the plot to bomb a rally near Paris reminds us of #Iran’s continued support of terrorism in Europe. We all must be clear-eyed & unified in countering Iranian-backed terrorist threats. pic.twitter.com/PSQRQdEYQa

The regime in Tehran continues to provide a great deal of financial support to terrorists around the world despite ongoing economic troubles in Iran that are seeing the declining economy harm the livelihood of the people of Iran. As the U.S. State Department Coordinator for Counterterrorism Nathan Sales pointed out in late 2018, at that time Iran provided close to 1 billion U.S. dollars annually in support to terrorist groups around the world. Just imagine the difference that the scale of spending could have made in improving the livelihood of the Iranian people at home had it not been spent on terrorism around the world.

For the regime, it has had a policy as discussed of promoting terrorism and supporting proxied militias around the world. In Syria, since the early days of the civil war, Iran has been involved in propping up the Assad regime to include providing arms, training, advisors, and combat personnel. Throughout the conflict in Syria, in which over 500,000 civilians have been killed, Iranian forces in support have played a key role in this appallingly brutal conflict that has included the use of chemical weapons by the Assad regime against his own people.

#BREAKING
U.S. to reduce troop level in Iraq from around 5,200 to 3,000 in September, according to an official statement from CENTCOM chief Gen. McKenzie.

My take:
This initiative needs to maintain a very close eye on #Iran's regime & their proxies in Iraq. pic.twitter.com/4LBlnTj4HG

In Iraq, the regime in Tehran has backed Shia militias like the Badr organization, and Hezbollah, who have long served as reliable partners for Tehran, including conducting attacks on U.S. military personnel in Iraq from 2003 to 2011 using Iranian-provided munitions. Using Iranian-provided weapons, these groups were responsible for over 600 U.S. personnel killed in Iraq between 2003 and 2011.

Elsewhere in the region, Iran maintains strong ties to the terrorist group Hezbollah in Lebanon. In recent years, as the State Department has publicized, Hezbollah operatives have been caught preparing attacks in places like Azerbaijan, Bolivia, Cyprus, Egypt, Peru, and Thailand. Hezbollah weapon caches have been discovered in the Gulf and Europe, in Asia and Africa. In 2012, Hezbollah bombed a bus in Bulgaria, killing 5 Israelis and 1 Bulgarian. In 2018, Iranian operatives were arrested for planning attacks in Denmark, France, Albania. And authorities in Austria, Belgium, and German arrested operatives planning attacks.

Reporting by #MEK #Iran
Kayhan daily, the known mouthpiece of #Iranian regime Khamenei, published a piece on July 25 expressing grave concerns over the trial of the mullahs’ diplomat-terrorist Assadi and three other operatives facing bombing/terrorism charges in Belgium. pic.twitter.com/T74MZJKySJ

The regime also provides support to Hamas and other Palestinian groups. Shia militias in Bahrain and the Taliban in Afghanistan. And Yemen, Iran has supported the Houthi rebels with financial assistance, weapons, military training, and operational advice. And let us not forget, in the year 2011, the Quds Force allegedly was involved in a plan to assassinate the Saudi ambassador to the United States in a restaurant in Washington, D.C. And in so many areas the regime is just not on the same page as the Iranian people, who do not support the regime trying to spread this malign influence across the region and its support for terrorism.

So, what do we do about this situation? One, I think it’s very important that we continue the maximum pressure campaign that has been undertaken by the Trump administration, to deplete and limit the ability of the regime in Tehran to support terrorism and export its malign influence across the region. We have seen the maximum pressure campaign substantially reduce the ability of the regime to support terrorism abroad. Across the board, the U.S. Treasury Department and the State Department have been very active in designating and sanctioning individuals, organizations, and sectors of the Iranian economy.

As Mrs. Rajavi discussed, it’s very important that this complex web of cutouts, front companies, individuals, and the financial tools that are used around the world must be targeted and attacked. And the private sector plays a key role in this. Companies need to be very careful in understanding who they are dealing with to prevent them from being involved in supporting these kinds of terrorist or illicit actions. In the United States, the FBI and the State Department have also stepped up things like the rewards for justice program that offers rewards for information on Iranian sponsored terrorism.

A second thing that we need to continue to do is to use U.S. military forces to work with partners in the region to deter and where necessary take steps like the strike on Qasem Soleimani to restore deterrence and to deter further terrorist attacks where we see that deterrence fraying. We can’t be afraid that when necessary to take very firmly, decisive action.

Third, it’s very important that we continue to buttress and restore relationships between the United States and allies including in law enforcement cooperation. We have to have that cooperation across the full spectrum of diplomatic, military, economic activities like those led by the Treasury Department, and our law enforcement intelligence agencies.

Finally, we need to recognize that terrorism is a part of the fabric of this regime in Tehran. It has been since the start and remains so today. This means that things like Iranian embassies and so-called diplomats will continue to be employed in supporting terror. Countries must act accordingly to very closely monitor and surveil the activities of those Iranian diplomats posted abroad, and in some cases, as we have seen in Albania, they will need to shut down embassies that support terrorism. We simply have to be clear that this is not acceptable, be firm in responding, and this is again part of the fabric of this regime and something that we must be very vigilant and firm in countering.

So, let me just say in conclusion that I’m grateful to the organizers for inviting me to speak to such a distinguished group and again to express my admiration for the way that you have overcome all the challenges in the age of coronavirus to bring everyone together and so many people who are supporters of the cause that you champion. And thank you again for hosting this conference on this critically important issue.