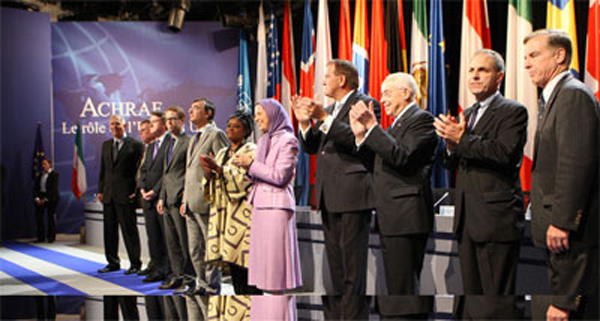 Urgent and vigorous action should be taken by European Union nations and the United States to force the Iraqi government to cancel its 31 December deadline for the closure of Camp Ashraf, say prominent international figures.

Distinguished political figures from the EU and US are alarmed that Iraq, in its imposition of the stringent deadline, is determined to hamper efforts to relocate the residents, members of the People’s Mojahedin Organization of Iran, outside Iraq.

The calls come as the National Council of Resistance of Iran (NCRI) warns that Iraq, at the behest of Iran, is preparing a new attack against the camp that could lead to another massacre. The information are based on Iranian Resistance sources inside Iran.

NCRI President-elect Maryam Rajavi, the leader of the Iranian Resistance, told an international conference at the European Parliament in Brussels on Wednesday October 19: “I warn that a humanitarian catastrophe is looming; we should not lose time to stop it.

“Currently, the Iraqi government is making military preparations to conduct this plot. The Iraqi government wants to disrupt the work by the United Nations High Commissioner for Refugees (UNHCR) to confirm refugee status of the residents in a bid to use lack of progress as a pretext for another deadly attack at the end of December.”

The conference, attended by dozens of members of the European Parliament, called on the United Nations Secretary-General, the UNHCR, the UN High Commissioner for Human Rights, and western governments to adopt urgent measures to ensure the protection of the residents.

The US was heavily criticised at the conference for its failure to abide by its pledged responsibilities to protect the residents, now that they had laid down their arms – which would lead to it holding full responsibility should another massacre take place.

The conference also called on the US to remove the PMOI from the US State Department list of Foreign Terrorist Organizations.

Rajavi asked Western governments, especially EU states, that are allocating enormous financial assistance to Iraq, to force the Iraqi government to abide by its international obligations. This included, she said, co-operation with the special envoy for Ashraf affairs assigned by Lady Catherine Ashton, the EU High Representative for Foreign Affairs and Security Policy. Mrs Rajavi has praised the appointment of the envoy by Baroness Ashton.

It was vital that Iraq should be persuaded to stop interfering with the efforts of UN agencies to help the residents of Camp Ashraf, Mrs Rajavi stressed. She asked the UN Secretary General and the High Commissioner for Human Rights to station UN monitors at Ashraf as soon as possible as a means of averting the next humanitarian catastrophe.