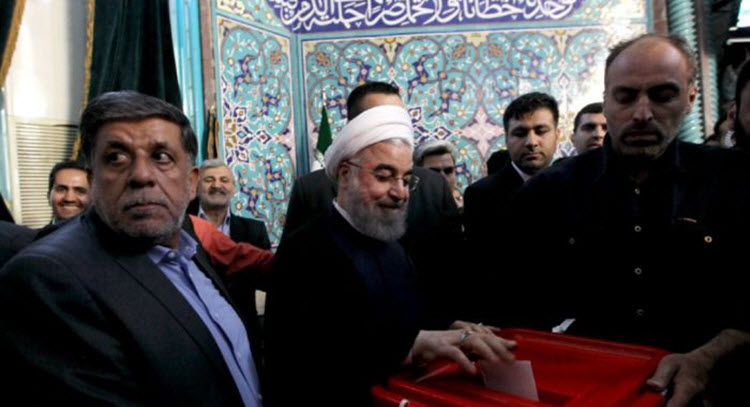 The Iranian people faced a hard decision in this year’s presidential election. In Iran, the people’s choices to were reduced to selecting the lesser of two evils.

A cleric with no discernible public backing, who is also widely reviled for his role in executing 30,000 Iranian dissidents in 1988, Ebrahim Raisi, was their alternative.

In an article published by iranlobby.net, they say, “It is also why Rouhani’s election was met with media messages of a ‘moderate’ win; all of which suits the mullah’s purposes to frame the narrative for the next four years as a moderate Iran confronts an ‘extremist’ Trump administration with its “extremist” Arab allies.”

The geopolitical landscape is changing for Iran’s regime. Their Arab rivals are joining the U.S. in forming a policy of confronting Iran instead of appeasing it.

The Iranian regime’s own policies vis à vis the Syrian civil war and the Houthi rebellion, along with a dire economy and their new, aggressive ballistic missile program, caused this turnaround in alliances. “You know things are different in the world when direct, non-stop service between Tel Aviv and Riyadh has been inaugurated,” writes iranlobby.net.

Changes are also occurring internally in Iran. Already struggling to suppress social media and encrypted communications apps such as WhatsApp and Telegram, the regime seeks to suppress all dissent online, which is a virtually impossible.

However, the internal threats to the regime are most apparent in the increased activity of organized Iranian resistance groups. According to dissident media outlets, the network of dissidents supporting the People’s Mojahedin Organization of Iran (PMOI/MEK) swelled to an unprecedented scale and gave voice the Iranian people, regarding both the candidates, and the regime itself. Considering that open support for the MEK inside Iran is forbidden considered a capital crime, and activists who are caught face torture and possibly even execution, this is an astonishing development that bodes ill for the regime.

In cities and towns across the country, including Tehran, Mashhad, Isfahan, Tabriz and Shiraz, activists braved challenges to put up posters and images of Iranian opposition leader Maryam Rajavi on bridges and overpasses, car windshields and even the walls of buildings belonging to the regime’s security forces: the Revolutionary Guards and Basij.

Although the Iranian regime claims this election had an “historic” turnout, this has been questioned by the National Council of Resistance of Iran. “One of the simplest and easiest way is multiplying the real votes of the candidates by a factor so that the number of participants in the elections can be shown as several times higher than the real figures,” the NCRI said in a statement. “One of the other ways to cheat, is printing additional ballots and producing fraudulent ballots in secret sites and inserting those ballot boxes into counting centers so that the number of participants is shown higher at the polls.”

Outside of Tehran, voter turnout was reported as largely apathetic with boycotts in many provincial towns and cities.

Iranlobby.net writes, “What hasn’t changed in Iran is the basic make-up of the power elite still holding control firmly in their hands which is the religious body comprising most of the parliament and councils governing the judiciary, civil service and financial sector, along with the Revolutionary Guard Corps which still controls virtually all the state industries and companies.”

During his next term in office Rouhani will find a very different situation, as the era of appeasement is over for Iran, and its people have begun to actively speak out for democracy.