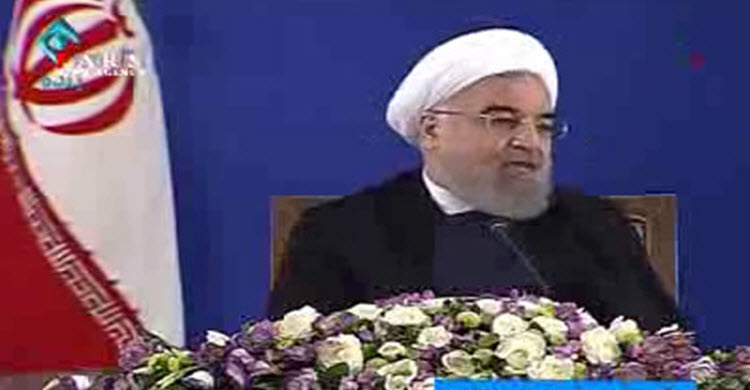 Shortly after his election to a second term, President Hassan Rouhani held a press conference to outline his plans for the upcoming four years.

That the mullahs’ regime will continue their militant efforts in the region, was one of the first things he noted, adding that Iran had troops on the ground in Iraq, Syria, and Lebanon, and that they are ready to continue to fight terrorism in the region. “Iran has and will support these through its diplomats and military advisors,” said Rouhani. “The Iranians and Russians fought against terrorism alongside the Syrians and the Iraqis. Who continues to fund the terrorists? The U.S. government has never fought against terrorism…Hezbollah is a group accepted and trusted by the people of Lebanon.”

Rouhani claimed that the voter turnout numbers had increased, however, this cannot be independently verified. He then highlighted Saudi Arabia’s lack of an election process. “The word elections have no meaning for them (the Saudi government) and they have yet to see a ballot box. I hope one day the rulers of this country will allow their rule to not be hereditary,” said Rouhani.

He discussed Iran’s weapons programs during his speech, emphasizing once again that Iran will not seek permission to pursue its missile projects and “if these missiles were not built, some parties would be miscalculating, and plunged the region into war. Anytime we have a technical need to test-launch our missiles, we will do so. We accepted the nuclear deal to boost our defensive power.”

The Iran nuclear deal, formally known as the the Joint Comprehensive Plan of Action (JCPOA) was meant to curb Iran’s development of nuclear weapons in exchange for lifting some sanctions that would help boost Iran’s flagging economy. U.N. resolution 2231, which was put in place days after the Iran nuclear deal was signed, calls on the Islamic Republic not to conduct ballistic missile tests.

Throughout the day, other Iranian leaders repeated Rouhani’s stance. Fars news agency reported that Iranian MP Hossein Naghavi stated unequivocally, “We will not negotiate with anyone over the development of our missile technology, and we will not wait for the permission of no organization or country. We will continue efforts with all our might to increase the military output…the parliament has allocated $1.3 billon to strengthen the military foundation and this is considered a major leap forward.”

President-elect Maryam Rajavi, of The National Council of Resistance of Iran (NCRI) said, “He neither wants, nor is able to alter the regime’s foundations and behavior.”

These early statements seem to prove that the international community is in for more of the same from Iran over the next four years.