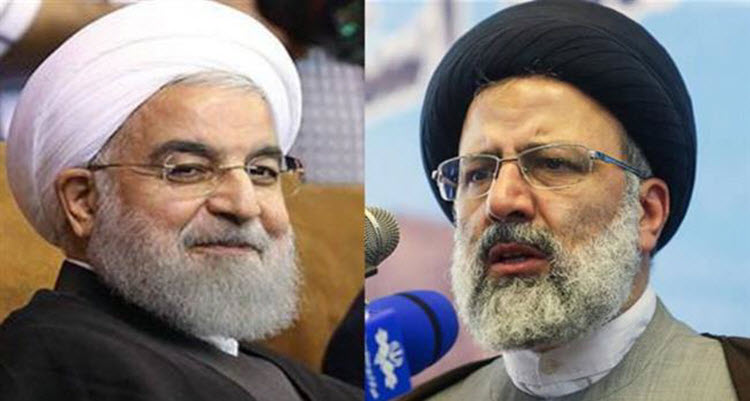 The Iran lobby seeks to downplay the role Ali Khamenei plays in both determining the outcome of the election, and his power over whoever is elected.

The National Iranian American Council was the most vocal group that pushed the narrative of Iranian presidential election being a battle between the “moderate” Hassan Rouhani and the “hardliner” Ebrahim Raisi.

The Huffington Post published pieces by this group. The first one by Reza Marashi of the NIAC, says iranlobby.net, in their article published on May 22nd, Marashi “argues this central conceit of reformists and pragmatists fending off hardline conservatives. The way Marashi describes it, it is almost a heroic struggle. The only thing missing is a dramatic musical score.”

Marashi says that the Iranian people want moderation and reform in their president, and portrays Rouhani as a trailblazer. “While it’s true that election season in Iran traditionally allows for an expansion of otherwise taboo political discourse, Rouhani taken it to uncharted waters. First, he publicly committed to engaging in the process of lifting all non-nuclear sanctions if he wins a second term. Then he told a rally that he had not forgotten his 2013 campaign promises, openly stating: ‘Either they have been achieved, or I have been prevented from keeping them.’ And remarkably, he directly told voters: ‘I’ll need votes higher than 51% in order to do certain things,’” Marashi writes.

Rouhani is a loyal member of the regime, pledging allegiance to the same radical theology that all office holders swear to. His record over the past four years shows that the pace of executions rose and was condemned by both the United Nations and Amnesty International. Free speech is suppressed to the extent that Iranian access to an unmonitored internet is non-existent, journalists have been arrested, blogs and newspapers shut down, and efforts made to crack the encryption of social apps such as Telegraph and WhatsApp.

Iranlobby.net writes, “Marashi is correct on one point, which is that this election really is not about the presidency, but rather the positioning going on to succeed Khamenei at the top of the mullah pyramid.”

The NIAC’s Tyler Cullis says in his piece in Huffington Post when he asked why Democratic members of Congress appear to be willing to give the Trump administration leeway in leveling additional sanctions on Iran.“Democrats have signed up as co-sponsors for Senate and House legislation, believing their political fortunes best lie in supporting aggressive action against Iran rather than acting as a buffer against the Trump administration’s efforts to derail a nuclear accord that, by all accounts, is working as intended,” Cullis writes, and adds, “Democrats are risking a historic mistake – an error in judgment that could end up both alienating their progressive base and costing them hoped-for electoral gains, not to mention setting the stage for a new conflict in the Middle East.”

The idea that war with Iran will come from tightening sanctions against Iran, is the same argument the NIAC made after Congress got tougher with Iran.

Since the NIAC acknowledges that the office of president in Iran lacks power, its arguments for “moderates” to win are unclear.